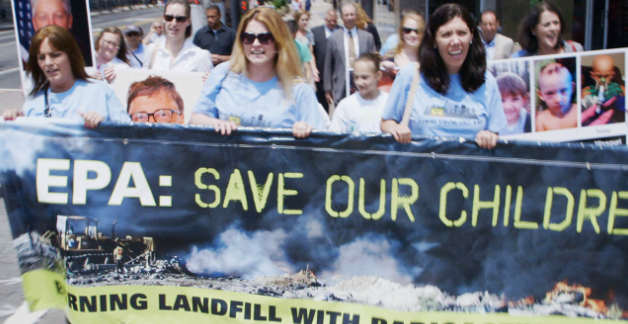 The homeowners are active and frightened; the officials are missing, slow, unprepared or indifferent.  Mothers check the direction of the wind in order to know whether or not their children can go out to play.  The active family citizens are searching and serious about the risk of radioactive particles resulting from an underground fire in one of the two closely buried massive landfills, one for radioactive waste just feet from their homes.  The local fire department conducts drills to prepare their teams for radioactive fires.   The film’s locale is a pleasant looking suburb of St. Louis, Missouri—a suburb where it is impossible to sell a house to finance a move.

This film is a tapestry of sadness and frustration and viewing it makes it clear that something is terribly terribly wrong.   The most ironic scenes show a tarp spread over the waste storage area.  It is a sham protection and mainly serves to mark the area.  The workers on the waste area walk all over it at the potential of radiation poisoning.

The film captures the anguish of individuals and their families over the cancer rates of this community.  Other syndromes such as total hair loss in children can be seen.

The crisis—a superfund site where wastes are rapidly decomposing and poorly stored—seems to belong to no one.  The waste came from preparation for the atomic bomb and was used in the US’s Manhattan Project.   The site is managed by the Environmental Protection Agency  (EPA).  The Missouri federal congressional delegation has tried to move responsibility for clean-up from the EPA to the Army Corps of Engineers. But progress so far is unsuccessful.  There are a lot of studies and a planned barrier to protect the radioactive area from the area of the underground burn.  Republic Services, the owner of the landfill area,  says a barrier will take a year and lots of money to build.

As of 2014, the EPA lists 1322 Superfund sites with 53 more sites under consideration.  A Superfund designation indicates preferential cleaning of a dangerous site.  This project is desperately short of money.

Rebecca Cammisa’s documentary dramatically captures the crisis and the desperation of family groups, including the valiant Just Moms group as they testify and demand action from everyone who is even marginally responsible.  The film shows then trying to contact Bill Gates on the basis that he reputedly owns stock of Republic Services.  Unfortunately, in real life, there are few dramatic uplifting happy endings and that is also the case here.  This dangerous mess will probably continue.  Every person who views the film almost inevitably sympathizes with the families and the endangered civil workers such as the firefighters.  Where once such a documentary would encourage environmental advocates to press for change and at least to push for enforcement of regulations, but today’s federal government is targeting the EPA and stripping regulations all over the government.  So today the documentary posts a red hot warning about superfund sites.  It is always hopeful when such a film is viewed in Washington, that it will be seen and its challenge accepted by the many and varied people who live and work here. The families are trying, the filmmaker valiant and now its up to the audience.