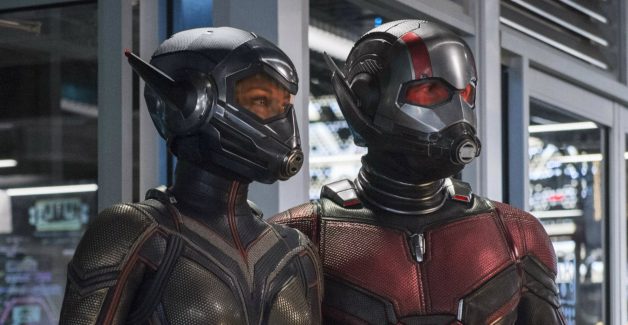 ANT-MAN AND THE WASP

Marvel’s and Disney’s highly-enjoyable and altogether entertaining comic book/superhero/science-fiction/fantasy film “Ant-Man and the Wasp’ is a superb fun, funny and wholly upbeat and hilarious summer movie blockbuster—the perfect movie to go see during the dead of summer, heat waves and the current dog days of summer!

Simply—just head out to the movie theaters this week and see “Ant-Man and Wasp”–and just have a great time! This sequel is nearly as entertaining as its 2015 predecessor “Ant-Man” (the first remains the better film, but that’s nothing against the sequel, which is still worth seeing.) Both films are positive additions to the Marvel franchise string of comic book/superhero/sci-fi/fantasy movies. And see “Ant-Man and the Wasp” in the movie theaters–the inventive special effects and unique, fun and funny action sequences–the work of hundreds of special, computer, digital and visual effects workers from several special effects companies–deserve to be seen up on the big screen.

The movie is full of fresh, funny—again, often just hilarious—performances from leads Paul Rudd and Evangeline Lilly (looking beautiful, sexy and tough while also playing a greatly intelligent scientist and researcher) and veteran actors Michael Douglas, Michelle Pfeiffer and Laurence Fishburne—and these three help Rudd and Lilly anchor the film overall—but the movie is also full of funny, energetic performances from a cast of young actors who are always watchable and always funny. Michael Pena, Tip Harris, Randall Park and Walton Goggins, among others, just appear to be having the times of their lives, along with the leads, as noted. And two young actors also make great impressions in the movie—young actress Abby Ryder Fortson, who is 10, and Hannah John-Kamen, 28, who play Ant-Man’s cute, pretty, spunky, smart—and just adorable—daughter and a young woman who plays an important part in the over-arching story as a dangerous superhero with a backstory packed with pathos and tragedy, respectively. Together, this strong cast emanates chemistry, presence, energy—and fun—throughout the movie.

Much like “Guardians of the Galaxy” and its sequel, “Deadpool” and its sequel, “Doctor Strange,” and several of the more-recent “Spider-Man,” “Thor” and “Avengers” films, “Ant-Man” and “Ant-Man and the Wasp” relies heavily on a steady dose of humor to carry the film, lift up the film, move the film forward, and provide that always-needed balance against the requisite good-versus-evil, superhero-versus-villain, good-guys-versus-bad-guys story, plot and character elements. But, as with the other noted films here, the humor in the “Ant-Man” movies is not forced, is genuinely funny, and indeed—sorry for the cliché—has the audiences laughing in the seats. Yes, yes, that’s a horrible cliché—but it’s true, and it’s noted because it matters, and it’s important to all of these recent Marvel and D.C. and other-studio superhero and comic book movies: When you don’t take all of these grandiose and extravagant and at-time difficult-to-believe comic book elements not too seriously, and, again, balance the heaviness and seriousness with brevity and lightness and humor and just good times, these genre movies—guess what—often turn out to be fun and enjoyable!

The story in “Ant-Man and the Wasp” centers on Ant-Man’s current somewhat-bizarre situation—he’s confined to house arrest with an ankle bracelet after his escapades from the first film caused some super-hero mayhem and chaos; his mentor and creator Hank Pym is trying to find his wife—who disappeared years ago amid an heroic mission–in some type of trippy, scary, inventively-designed, created and produced quantum miniature world; Pym is also on the run from the FBI; Pym and Paul Rudd’s Scott Lang, also known as Ant-Man, are fighting a mysterious creature nicknamed Ghost (Hannah John-Kamen, turning in a great performance), who is trying to steal Pym’s research and laboratory for her own purposes; and Rudd and the Wasp, or Hope van Dyne (Lilly, also turning in a strong performance), are trying to balance helping Pym find his wife, elude the authorities, battle the mysterious Ghost, and try to handle and get their minds around a continuing complex romantic relationship. These various plots, subplots, backstory and main story converge well together, and the writers, including Rudd, deserve credit for an inventive, unique story that benefits greatly from not being part of the overall Marvel character continuing storyline that’s helped to drag down too many of the other films over and over again. This time, the story is unique and clever—and, again, that also helps lift up the movie.

And it’s great to see veteran actors such as Michael Douglas, Michelle Pfeiffer and Laurence Fishburne tower over and steal scenes from and complement and lift up their younger actors—that’s due to their extensive experience, maturity and presence, and that’s not in any way a knock on or criticism of the younger actors—in these superhero movies! Douglas, Pfeiffer and Fishburne shine in this movie, and they seem to be having the time of their lives. And the chemistry generated between Douglas and Pfeiffer late in the movie is moving and emotional—and deserves to be explored in a hopeful third “Ant-Man” movie. A great future storyline would be to focus on the future research, science and studies by these characters, and the overall redemption, forgiveness and acceptance by the government and society of their prior actions, and how Pym, his wife and Fishburne’s Bill Foster, an old friend and scientific colleague of Pym’s, come together, work together and help fight the good fight! Along with Rudd’s Lang/Ant-Man and Lilly’s Wasp/Hope van Dyne, of course!

One major criticism of “Ant-Man and the Wasp” that continues to apply to all modern-day films—and, yes, all of them: There is zero—none, nada—reason to see this movie in the awful, over-hyped, sensationalized, and generally rip-off 3D version. No reason. There was barely anything that was 3D in the 3D showing that was screened recently, the 3D effects are barely there, and to this day, no one has managed to produce or manufacture any 3D glasses that are pleasing or comfortable to wear. The entire 3D mess with movies today is just that—a mess and a rip-off. Do not pay to see this movie—or any movie—in 3D. It’s just simply a rip-off of the worst kind. Movies are too expensive to see these days—a factor that’s bringing down the moviegoing experience for many people—and no one needs to be shelling out and wasting any money for a rip-off 3D gimmick. Just go see the 2D version—you’ll have a much better time!

“Ant-Man and the Wasp” is the twentieth film in the Marvel-Disney string of Marvel-based comic book movies, and it’s a great way to celebrate this franchise’s twenty-film milestone. The Marvel-Disney series of movies started just ten years ago, in May, 2008, with the release of “Iron Man.”

Along the way, there’s been great films, mediocre films and, yes, bad films. But overall, Disney and Marvel have done a pretty good job with releasing twenty franchise films in ten years, and the barrage is scheduled to continue through the coming years. Of course, that could be great news, just good news—or bad news, depending on the quality of the movies, of course. But if Disney and Marvel would make more movies like the “Guardian of the Galaxy,” “Ant-Man” and “Doctor Strange” movies, then the continued existence of the franchise would be justified. But there’s also the danger of over-saturation and over-exposure, if the films start to meld into each other, appear to be too much the same, focus too much on the same old stories, and become stale, well, the Disney and Marvel execs, fans and moviegoers can at least look back at a quite interesting time at the movies from 2008 to 2018, and just celebrate and be thankful for the good movies that the studios did produce—like, say, “Ant-Man and the Wasp!”