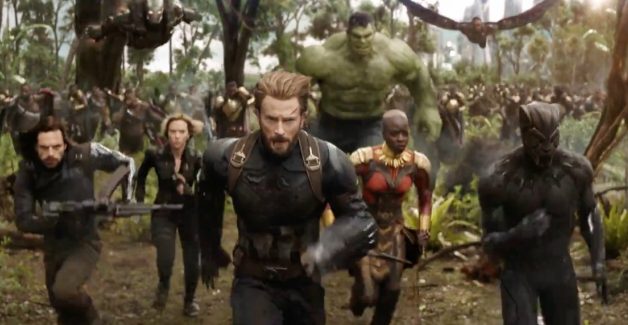 This may come as a daunting surprise for the Science Fiction Fantasy Superhero Comic Book Universe (SFFSCBU), and this may prompt some type of cosmic fandom mind meltdown akin to Bruce Banner suddenly transforming into the Hulk, but in all seriousness, “Avengers: Infinity War” is a huge downer, a huge disappointment, it is not the grand epic end-of-days SFFSCBU spectacular that so many think it could be, and not even a collection of all of the universe’s infinity stones can save this over-done, over-loaded, jumbled, overly-broad, desperate-for-attention mish-mash mess of a movie.

What starts out as a rollicking, rousing and even promising, at times, science fiction and fantasy adventure with grand-goals, epic aspirations, champagne wishes and caviar dreams slowly and surely and disappointedly dissolves and nosedives into a morbid, dark descent into despair, depression, desolution and devolution.

Forget the hype. Forget the collection of comic book superheroes. Forget the collection of real-life actors. Forget the mondo-budget production values and impressive special effects. Forget the overall, general production and direction values. Forget all of that, because they don’t matter. As so often happens with many of these glossy, overdone, over-hyped and over-special-effected blockbuster monstrosities, it’s the story, stupid, or it’s the stupid story that leads the product down the road to apocalyptic ruin. “Avengers: Infinity War” suffers from an insufferable, uninventive, un-fun, unimaginative and increasingly depressing storyline that starts nowhere and goes nowhere, except downhill. At the same time, there’s too much story, storyline and plot—the producers, directors and writers obviously tried so hard to cram seemingly every major superhero and comic book lead character into this—for no clear reason—but the cramming never works, and every character—and actor—is spread so thin it’s like their characterization outlines were designed by an office paper shredder. And—also a fault—many of the major problems with the story, plot and subplots can’t be adequately explained in detail, lest the sci-fi, fantasy, superhero and comic book worlds implode on themselves and disintegrate in a dark, cloudy dust storm fury of spoiler agitation and anger.

And, horribly—and this is not a spoiler—the movie’s ending is simply yet another cheap-shot, rip-off, money-grubbing set-up for yet another sequel. No matter how often this is done, no matter what promises are promised, this is not the way to make a movie, and this is not the way to end a movie—no matter what any greedy Marvel or Disney corporate suit says. Each movie—every movie that is made–should be a complete entity, and should have a beginning, a middle and an end that is individual, specific and connected to that respective movie. Simply ending a film—after an exhausting, dire and tired two-and-a-half-hours-and-more—with a cheap set-up to the next film is just a rip-off and a shoddy gimmick.

In short, “Avengers: Infinity War” spoils the comeback streak for this SFFSCBU genre of movies that has seen some truly inventive, fun, funny and overall entertaining films in recent years. Among the excellent SFFSCBU films in recent years: “Guardians of the Galaxy,” “Guardians of the Galaxy Vol. 2,” “Doctor Strange,” “Ant-Man,” “Spider-Man: Homecoming,” “Wonder Woman,” “Deadpool,” “Thor: Ragnarok” and “Atomic Blonde.” Alas, “Avengers” Infinity War” is not to be listed among these above-average, recommended—and inventive and fun–movies. You’d have a much better time at the movies this weekend seeing Steven Spielberg’s much better–and much more inventive and entertaining–“Ready Player One” for the second, third or fourth time.

“Avengers: Infinity War” could have been an instant classic, but its story line, plot, subplot and characterization faults all end up spoiling and bringing down in a horrid way what could have been a great movie. Alas, in the end, as noted, it’s just a downer. And it’s simply not even recommended.

“Avengers: Infinity War” tells the too-simple tale of a psychopath villain named Thanos (a CGI monstrosity voiced by Josh Brolin, who does his best with an empty character, an empty characterization and dialogue that is so loony tunes, so unintentionally-bad crazy dumb, it’s a wonder it got on screen), who—for reasons never fully, intelligently, clearly explained on a rational (even in this universe) level, even in the context of out-there sci-fi and fantasy—wants to collect the universe’s six dispersed so-called infinity stones, minerals that were spread across the universe during the big bang and control various aspects of time, space, soul, power, reality, mind, earth, wind, fire, blood, sweat and tears, ying, yang, zeitgeist, Crosby, Still, Nash, Young, and, well, everything, and use the stones to—are you ready?—kill half of the universe’s population in one big, crazy, psycho-villain universal genocide.

Oh, yes, of course, there’s all sorts of Marvel Cinematic Universe backstory that tries to explain Thanos’ motives for—killing half of the universe’s population. But on a filmic level for this particular film, Thano’s stilted, over-reaching and desperate-to-be-taken-serious dialogue just doesn’t ring true and, after scene after scene after scene of essentially the same thing, eventually just falls about and crumbles to dust. His talk, his explanations, his reasoning just don’t work—again, even within the context of sci-fi and fantasy. And that’s a major problem with the film’s story—the basic storyline, the basic premise, is shaky, shallow and shortsighted to start with. And if your basic premise and foundation are shaky, the movie never gains momentum and stays stuck in some type of repeating loop of doom, like something Doctor Strange’s alternative-world, evil-world doppleganger would conjure up for laughs.

And this segues to another major story problem with the movie—the story’s endless loops of essentially the same scenes—various do-gooders going up against Thanos with this plan and that plan and this fight and that fight and this struggle and that struggle and that battle and this battle—you get the idea—is tiresome. There are so many people with so many plans trying in so many ways to defeat Thanos, you would think one of these guys—supposedly heroes with incredible superheroes—would be able to do SOMETHING! But, again, the movie just presents scene after scene of superhero after superhero trying one plan, and then another plan—and constantly failing. That’s not a spoiler—you see this in the advance publicity and trailers. But it’s all just tiresome. One tends to think after a while, “If you’re over-loading this movie with a zillion superheroes and comic book characters, then why the holy hell can’t one of them do anything successful to kill this damn villain—and bring this movie to a welcome end? Why are all of these people here if they just can’t do anything?” The whole thing, again, just doesn’t register—or make much sense.

Add to the shaky premise, stilted dialogue, over-crowded cast of characters, empty characterizations, too-simple plot, too-simple story, ridiculously-motivated villain, uninventive scenes, overbearing series of fight scenes—just how many fistfights, sword fights, gun fights, laser fights, deaths, destructions, fires and explosions need to be in one movie—and then add a series of empty, failed plans by creatures who are supposed to be superheroes, and then add to all of this an overlong running time ( a far-too-long 149 minutes, if you can believe that), and the whole exercise—again—just ends up being exhausting to sit through. And, yes, some folks at a recent screening were checking their watches during the movie, and most likely they were not just curious about what time it happened to be at that moment.

“Avengers: Infinity War” tried to include the gimmick of cramming as many superheroes and comic book characters from the Marvel canon as they could into one movie—a sort of “It’s a Mad, Mad, Mad, Mad World” of SFFSCBU movies. There’s Iron Man, Spider-Man, Captain America (Steve Rogers, if you must know), Thor, Peter Quill, Gamora, Rocket, Groot, Drax, Vision, Black Panther, Bruce Banner, Black Widow, Doctor Strange, War Machine, Scarlet Witch, Falcon, Loki, Wong, Mantis, and Batman, the Penquin, Aquaman, Superman, Super Chicken, McGruff the Crime Dog, Super Pickle and Cool McCool. No, wait—those last eight are not actually in this movie! That was a joke. Somewhere, a diehard fan just had a brief, mild heart attack. But all of the other characters listed before Batman are actually, truly, honestly in “Infinity War”—and that’s, again, a major problem. There are simply too many characters, and too many actors, and too many heat-and-fire-filled supercooks in this particular superhero otherworldly kitchen. The story struggles to give a believable, respectable reason for most of these characters to even be here—other than what’s always in the back of everyone’s minds: It’s a real-life Disney-Marvel corporate boardroom marketing moneymaking movie gimmick. It’s not a grand parade of superheroes that everyone can celebrate—it’s a crowded, desperate, unworkable convention of characters crammed into scenes without any solid foundation of continuing believability, thus thinning every character’s and actor’s presence, power, impression, impact and filmic intelligence.

Here’s what “Avengers: Infinity War” should have been: An Avengers movie with no more than seven—that’s seven—lead characters, fighting as a team against one villain and his evil, dastardly rogues’ crew to rescue the infinity stones. Thanos’ reasoning should have had more, well, intelligent reasoning. The dialogue should have been more in-depth, more analytical—and more literary and intelligent. There should have been an emotional, human-oriented backstory and subplot that people could connect to on a human level—something like Quill’s family history in the “Guardians” films. The movie should have had various other SFFSCBU characters only appear in direct, clear plot-connected cameos that moved the story forward. The movie should have been no longer than two hours—that’s two hours, tops. And the superheroes should have prevailed and clearly won, with a clear-cut, happy-ending victory in the end. And, for good measure, one or two of the infinity stones should have been completely destroyed—forever—to put them to rest for good for future storylines. This is the movie that “Avengers: Infinity War” should have been–and this would have and could have been a much better film that the current one.

As it stands, or falters, now, “Infinity War” registers like dust in the wind, drifting apart and falling apart piece by piece as the movie progresses, ending in a pile of destruction and despair that oddly sends moviegoers out of the theater more depressed amd unfulfilled than happy, positive and optimistic. And that’s not how folks are supposed to leave a SFFSCBU movie.

Hopefully, and, yes, assuredly, the next Avengers movies will solve this problem, set things straight, send a hero to save the day, re-adjust, re-set and re-align the SFFSCBU and Marvel Cinematic Universe, and get people back to leaving the theaters with a smile on their face, and the assurance that they have not just wasted a few hours in the movie theaters. Who, though, will come through to save the day? Who’s left to save the day? Well, alas, for that answer, you’ll just have to wait until the next “Avengers” movie to see what miraculous, marvelous Marvel member arrives to save the day.