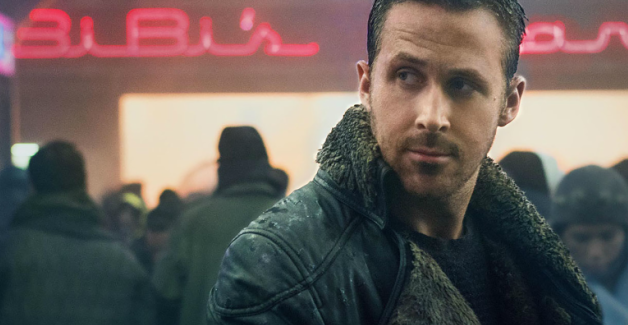 “Blade Runner 2049,” an overall troubled and muddled sequel to director Ridley Scott’s classic “Blade Runner” from 1982—yes, that’s right, thirty-five years ago—is a good film, but not by any means a great film, but even so, it’s a faulty, confusing and questionable continuation of the story from the original, complete with Harrison Ford, Edward James Olmos and Sean Young returning, original writer Hampton Fancher returning as one of the two scriptwriters, Scott returning as an executive producer, but incomplete in answering in a wholly satisfactory manner the one basic, overriding question hovering over this film: Did it really need to be made, and why on earth was this made?

Alas, “Blade Runner 2049” ends up being a good, entertaining, rainy-day, diverting science-fiction movie, but it’s far too long, too dark and depressing for its own good, entirely devoid of likeable characters—even Ford’s Deckard character from the first film is now horribly gruff, mean, detached, cynical and barely registering as sympathetic or likeable on any level, too violent for its own good, and far too dependent on striking visuals, special effects, set design, production design and art direction that are impressive, but eventually do nothing to save the movie from an overly long, somber, even morbid dystopian, post-apocalyptic atmosphere that ends up bringing everything—story, characters, plot, dialogue, story and plot and character development—down with it to the point where a misguided, messy, meandering third act drags down the promise and positive aspects that were presented earlier in the film. “Blade Runner 2049,” clocking in at a difficult, somewhat ridiculous two hours and forty-three minutes, actually would have been better with about thirty-three of those minutes left in the editing room. A tighter, faster-paced, better-timed and more well-constructed two-hour-and-ten-minute film with far less of that messy third act would possibly have resulted in a better movie—but only possibly.

The problems with “Blade Runner 2049” start with its overall atmosphere, mood, characters and story—and that’s a lot to start worrying about. Scott, director Denis Villeneuve and scriptwriters Fancher and Michael Green appear so obviously intent on re-creating and re-producing that classic, original, space noir feel of Scott’s original, they seem to forgotten that they were making a new film. That over-emphasis on stylish sets, production design, visuals, art direction and special effects seems to have not only swallowed the overall movie, but the budget, too. Some of the sets are so elaborately designed and presented, yes, it’s all incredibly impressive from an artistic, creative and art-oriented perspective—many talented people worked long hours on creating those sets and production and art design—but it’s also distracting from the basic story at hand. No movie can succeed wholly on beautiful, creative and impressive visuals, effects and production design alone—there needs to be an equally strong concurrent story with likeable characters, a believable plot, insightful dialogue and story, character and plot development. Alas, these basic filmic elements are there, but they are weak in this sequel. The visuals and effects simply distract too much from the story and characters in “2049,” to the movie’s detriment.

And about those characters—there’s barely a likeable character in the film, including, arguably, the lead character, an android—that’s a non-human robotic hybrid type of creature, really—known as K, played by Ryan Gosling. K is the lead character, and most of the story and movie revolve around him—until that messy third act—but he’s, well, an android with human memory implants who struggles to know what memories are real and what memories are false, and although that’s a sympathetic premise to solicit sympathy from viewers, the movie and script—and Gosling–still insist on presenting K as a somewhat distant, dry, distracted and downright depressing character. He’s all business and violence and survival mode tactics—but K’s also an android, and thus there’s not much room for humor, complex emotions or, again, likeability. Some may argue that K’s mental battles to find out whether his memories are implants or real do provide for a likeable, sympathetic character story, but, again, K for the most part is cold, calculating and chilly. A basic mistake in the movie as a whole was to make the lead character an android. The lead character should have been a human—with zero question about whether the human is a human, by the way.

The next set of problems occur with K’s basic duties—he’s assigned to kill other androids. How’s that for a living—being assigned to kill other androids who were created in the same basic mode as you were. It’s just odd to start with. One of the positive story aspects of the original film is that a tired human—Harrison Ford says Deckard is a human, so we’ll go with that—is chasing androids, which instantly sets up a likeable human-android conflict. Again, that’s one of the positive, major premises of the original. Thus, with K as an adroid in the sequel, that good premise is already shot to hell. K goes about his duties to survive, but it’s not much of a living, as he soon realizes. Soon, during one of his missions to kill a particularly gruesome, unlikeable android, K discovers a long-buried box that eventually leads to the revelation that Deckard had an affair with Sean Young’s Rachael android from the first film. That discovery opens up a pandora’s box of troubles for everyone, as a bizarre revelation about Deckard’s and Rachael’s relationship sends everyone into crazy mode—including K, K’s bosses at the Los Angeles Police Department (LAPD), the leaders of the current corporation making androids for labor and other purposes and that corporation’s bat-quano-insane leader Niander Wallace (Jared Leto, delivering an offbeat, unsettling and quite interesting performance as the just completely nuts Wallace), and a late- and rushed-introduced band of rebels whose complete purpose in the movie and the story are never really fully explained, realized or well-presented. Everyone starts to go after K and Deckard, and the two end up fighting for their lives—from the LAPD, from Wallace and his corporate goons, and from the similarly crazed rebels.

And yet another story problem occurs with that bizarre revelation about Deckard’s and Rachael’s relationship, which won’t be revealed here. But that plot point is an eventual let-down, and is so completely difficult to even explain clearly, the revelation doesn’t even fully work or is believable—even in the wildly imagined universes of science fiction, fantasy, original writer Philip K. Dick’s fiction or Scott’s blade runner world. The willing suspension of disbelief required to believe the plot revelation just doesn’t work—again, even in a science fiction context—and it’s that basic difficult plot point and its unbelievability and unclear explanation that also somewhat drag down “2049.”

It’s no secret that Ford, Olmos and Young appear in the film—since trailers and other advance promotions signify their presence. Revealing their presence doesn’t spoil anything, either. In fact, an overload of television ads clearly show Olmos and his origami creations—a clear signal that the character is Olmos. And Ford is clearly present in all of the television advertisements. Thus, it’s somewhat bizarre and questionable that the filmmakers were so worried about “2049’s” story that they begged film reviewers and science fiction feature writers not to reveal certain plot and story and character points about the movie in reviews. But, again—if you’re including these aspects in advance promotions and in myriad television advertisements, then who, exactly, was talking to whom at the studio about protecting basic story elements? It seems that the advertising and marketing guys missed some major meetings with the creative team guys to talk about promotion about the movie.

But the revelations don’t spoil the overall experience of “2049,” which is, in the end, simply a diverting, rainy-day science fiction film, anyway.

Gosling’s K, Ford’s Deckard—appearing thirty years after the events of the first film, Wright’s quite cold and off-putting and decidedly unlikeable LAPD manager, Leto’s Wallace, Wallace’s goon killer and enforcer Luv (Sylvia Hoeks) are all so dark, distant, depressing and downer, it’s exhausting trying to sit through an overlong movie with a dearth of sympathetic, likeable characters. It’s simply exhausting.

And Hans Zimmer and Benjamin Wallfisch’s droning, noisy, overly disruptive, non-melodic and eventually irritating music, or non-music, score almost literally prompts a headache—the score at times is a series of increasing loud noises and hums and sounds that, much like the over-reliance on visuals, special effects and overly-rich set designs, distracts from the basic story.

And “2049” suffers from what is now a long-cliched action-adventure staple of modern-day films: the tired, irritating and by now overdone and over-presented close-up hand-to-hand fighting style, in which two people swing and punch and stab and knock heads and jab and stick and shoot and impale and pierce each other with whatever is in the room, at an over-edited, too-close-up, bone-crunching noisy series of quickly-edited shots and actions that just end up being muddled, gut-wrenching, stomach-turning, unpleasant and horribly overly violent. These types of scenes gained some degree of popularity with the first “Bourne” film and the Daniel Craig Bond films and the first “Taken,” but, let’s face it, after those films and a few others that utilized this close-up fighting technique and a thousand other action-adventure, science fiction, fantasy and horror films borrowed this technique, the entire modern-day close-up fighting sequence has just simply become yet another tired, irritating and clichéd movie staple. It’s time, alas, for filmmakers to simply drop this staple and, if you have to present a fight sequence, just have the people fight in a clever, unique and original manner—like many of the fight sequences from, say, the Roger Moore Bond films or any number of the better Jackie Chan, Jet Li, Michelle Yeoh and Jason Statham martial arts-focused films. As it turns out, the fight sequences in “2049” also end up being a distraction.

In the end, “Blade Runner 2049”—despite the active participation of Scott, Fancher, Ford, Olmos and Young—doesn’t come close to the original, inventive and creative space noir dystopian world that Scott, Fancher and the production and art designers so beautifully crafted for the original “Blade Runner.” The sequel just ends up feeling too derivative and too dependent on the original film’s distinctive look, feel and atmosphere.

“Blade Runner 2049” is not a bad film, it’s not a great film, but in the end, it’s a good science fiction film with many faults—it’s too long, too nostalgic for its predecessor, too dependent on its predecessor, too reliant on striking visuals, too devoid of likeable characters, too violent and depressing, and too lacking in a believable, original science fiction story.

And, in the end, “Blade Runner 2049” didn’t really need to be made, in a sense. There are—still—thousands of fresh, original stories that film producers, directors, writers and actors need to be researching, writing, crafting and producing for the public—instead of turning and churning out this tired, endless treadmill, carousel and assembly line of unneeded, unwanted and unoriginal sequels, prequels, remakes, reboots, re-imaginings and retreads. There’s just too many good stories still out there waiting to be made into quality movies for this moronic, incessant parade of uninspired, unneeded sequels, remakes and reboots to continue to be made and to continue to clog up movie screens any longer.

In the end, alas, “Blade Runner 2049” did not need to be made, and it’s not clear just why this movie was made. In the end, the original “Blade Runner”—the original theatrical release that people love—should have been left alone, and all that filmgoers really needed to end this story was that great, beautiful image of Deckard and Rachael heading off together to a happy, contented future. That’s the image and the scene that the “Blade Runner” universe should have always ended with—a happy ending signifying true love and affection between two beings heading off to what could be a bright, positive, optimistic future.