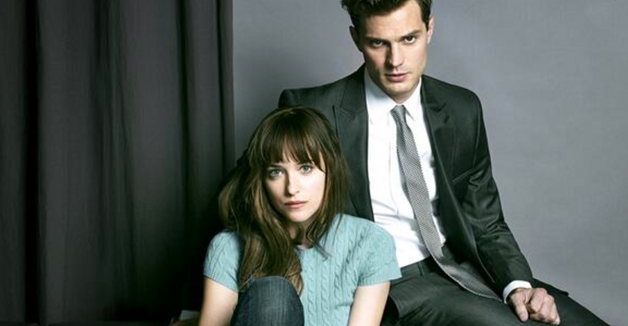 It’s every woman’s fantasy to meet a dashing handsome young man who is a billionaire. It is then the ultimate fantasy to have that handsome young billionaire ask you out for coffee, then dinner, and then whisk you away on his own private helicopter to his penthouse, and attempt to woo you to be his girlfriend. Ahhh, welcome to utopia. That fantasy is a somewhat predictable opening for E L James’ bestselling novel “Fifty Shades of Grey,” which opens nationwide Feb. 14 (Note: this reviewer has not read the novel yet). The movie starts with main character Anastasia Steele (played by a wispy soft-spoken Dakota Johnson) a pretty college student with a year next door kind of air, who in a bit of serendipity meets 27-year-old billionaire Christian Grey (Jamie Dornan), when she stands in for her roommate Kate (Eloise Mumford) in interviewing Grey for the school newspaper. Eyes lock, the seeds of apparent romance are planted, and sparks appear to fly from that encounter. Grey asks Ana to consider an internship at his company. She, who looks like a deer caught in the headlights, declines but he soon shows up as a customer at the hardware store where she works.

“Fifty Shades of Grey” is really a play and dark twist on the classic Cinderella story, ordinary girl meets Prince Charming. Only rather than living happily ever after, as in the Disney movie, there is a deeper and darker side to the reality under the façade of a fairytale romance. Grey’s dogged pursuit of his new muse Ana is wonderful and also odd. Why would a handsome billionaire go after the girl next door who is straight laced, soft spoken and a book worm?

The missing link surfaces when Grey, after wooing Ana with his care and concern in almost paternalistic fashion (including taking care of her after she gets drunk at a club), shows his new muse his “playroom.” The room is filled with Sadomasochism “toys” including ropes, handcuffs and expensive looking whips. Even perhaps quirkier or creepier is that Grey is seeking a “girlfriend” who would agree to S&M under specific conditions. In exchange for sexual favors and a signed contract Ana would be Grey’s “girlfriend,” and also have her own room in his penthouse. Nonetheless, there are strict rules in this arrangement. Grey’s sexual preferences include not sleeping in the same bed, and “I don’t do the girlfriend thing,” he says candidly. Nonetheless, “if you agree to be my submissive I will be devoted to you,” Grey proposes.

That’s where James’ novel and the film come to life as there is a slow unraveling tug of war between the Grey (the dominant) and Steele (the submissive). Grey’s proposal (contract), is on the surface tantalizing to every woman who has imagined having a sugar daddy. He showers her with gifts including a new Mac and expensive car. Along with the perks comes diminished freedom for Steele; Ana’s new “boyfriend” appears at her weekend family gathering unannounced.

Where is that fine line between love and romance? What is considered normal or abnormal in relationships? The movie seems to suggest that there is no line between right and wrong, and there are no rules. Despite what is written in the contract, rules in reality can be broken. It may seem cruel if not odd that a smart young woman like Ana would agree to what some might argue is domestic abuse and degrading to women, but didn’t she agree to it knowing what the terms are? When it comes to matters of the heart both genders cannot help but break rules, and overlook what outsiders might say is simply bad for them. In one of the final scenes Ana admits to Grey that she has “fallen in love with him.” Nonetheless, she must leave the relationship or arrangement since she is not getting what she wants. The arrangement that Grey has drawn up appears non-negotiable, or is it? Ana appears to walk away, but rather than cheering her on, I was left a bit disappointed. Despite being unconventional, eccentric and a bit disturbing, there seemed to be much potential in this relationship. What if both characters could change just a bit and meet each other half way?

In the end “Fifty Shades of Grey” is not simply a chick flick (that would be too simple), but it leaves one reflecting upon the modern day relationship especially when it comes to women. What does the brainy and pretty girl do when caught between her Cinderella fantasy and the practicality of giving up her personal freedoms? In the end the audience doesn’t know as the future of Ana and Grey’s relationship is a soap-opera styled cliff hanger. What is almost certain is that those of us who have been suckered into this pseudo-chick flick will likely be sucked into the sequel too.

More than a 100 million woman read the story about a 22 year old virgin falling in love with a billionaire with particular sexual preferences. Will the movie adaptation of “Fifty Shades of Grey” be able to live up to the success of the books? The expectations are high. The film is expected to collect more than $45 million during this opening weekend. This most anticipated movie of 2015 received mixed reviews in Europe, where it was already released on Wednesday. But one thing is for sure: the reviews will not keep the millions of fans of the books from going to the cinema.

Anastasia Steel and Christian Grey meet when she takes over for her sick roommate at an interview with the billionaire for the university magazine. This is where the first of many questions pop up. After the interview, we still don’t know how he makes his billions. It turns out we will never know.  Already before the first half of the movie, Christian shows some pretty freaky stalker behavior and tells Anastasia: “If you were mine, you wouldn’t be able to sit down for a week.” This is one of many moments when we think: “Run away while you still can!”

Writer of the books, E.L James, obviously has a thing for complicated love stories of this kind. “The Fifty Shades” books were actually developed from a “Twilight” fan fiction series, and Christian’s character appears to be a direct descendant of Twilight’s leading vampire: Edward (“I-love-you-but-you-should-stay-away-from-me”).

Director Sam Taylor-Johnson stayed very true to the book. Many of the lines are taken directly from the text and they manage to fall flat on the big screen (e.g., Christian: “I’m fifty shades of f***ed up”). The only good thing about this unrealistic dialogue is that it brings some humor into an otherwise very dull plot. The film is funnier than it is sensual (or sexual). Where at least half of the books are about sex, not even a third of the movie is. It’s obvious that Taylor-Johnson wanted to focus more on the tension between the characters than on the kinky sex scenes – which had earned the trilogy the label “mommy porn.”

The only question that makes you curious enough to wait for the sequel is: what made Christian the way he is? If you read the books, you already know.