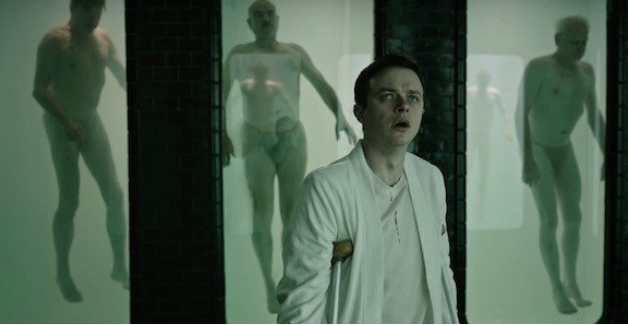 Film Review: A CURE FOR WELLNESS

A CURE FOR WELLNESS

Director Gore Verbinski’s muddled, gory, violent “A Cure for Wellness” is certainly not a cure for entertainment.

Moviegoers this weekend [Friday, Feb. 17 through Monday, Feb. 20, 2017–four days because of the President’s Day holiday] are strongly encouraged to completely skip director Gore Verbinski’s campy, tacky, gory, violent and overall depressing mess of a movie, “A Cure For Wellness.” A long slog of a movie that’s about forty-five minutes too long for its own good, “Wellness” starts out promising as some type of medical mystery suspense thriller, but slowly–very slowly, too slowly–the movie bogs down at every level–production, direction, writing and even acting–during the awful, meandering, confusing and messy third act. What started out as a possible simply good, escapist thriller turns into a horrible horrorshow of gothic goriness, ugliness, depressing scenes and downright unwatchable scenes.

The downward spiral of the film destroys any hope of saving this mess. Again, even the acting turns amateurish, campy and flat-out embarrassing in the third act, when suddenly the movie turns into a mishmash of “Phantom of the Opera,” “Shutter Island,” “Gothika,” “One Flew Over the Cuckoo’s Nest” and a thousand other movies where people are trapped in hospitals, prisons, jails, asylums, sanitariums, medical facilities or other institutions against their will. At times, people will feel they’re watching all of those other thousand movies, and those other aforementioned movies, instead of something new or original.

The movie simply becomes a tired, retread cliche of a thousand other horror, fantasy, science-fiction, suspense and supernatural films.
One particular aspect that drags down “Wellness,” as mentioned, is the sudden onslaught of gore, blood, violence, torture and utter brutality in the third act. Often simply unwatchable, the violence drags the film down into a gutter that the movie can’t escape. As a result, the film becomes simply a waiting game until the end credits roll.

The story–again, good for a while but soon tired and overly long, drawn out, confusing and scrambled–concerns a Wall Street finance worker who is sent by his company to a remote, somewhat mysterious sanitarium to retrieve a company big-wig so a messy financial problem can be worked out. Of course, once he’s there, the finance worker becomes trapped in an odd conspiracy at the sanitarium involving weird, illegal medical experiments, forced imprisonment, torture, death and widespread delusion and insanity. The direction by Verbinski starts out strong, like everything else in the film, but Verbinski’s own gluttonness, greed and ego get in the way of his filmmaking, and he and the movie end up drowning in his runaway excesses.

The only thing “A Cure for Wellness” will cure for filmgoers is insomnia–moviegoers who lose interest in the muddled movie in a warm, cozy, darkened theater on a cold February weekend might find the movie a good chance to catch up on some lost sleep.