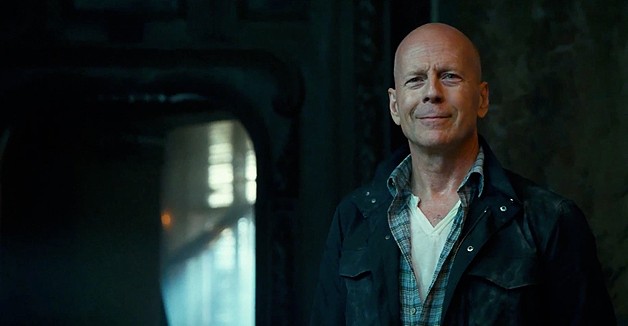 “A Good Day to Die Hard,” unfortunately, does not equal a good day at the movies.

This boneheaded, dumbed-down latest installment of the durable, 25-year-old series (yes, the first, original “Die Hard” was released in 1988) featuring Bruce Willis as the equally durable New York detective John McClane is easily the weakest in the five-film series, and the entire bloody mess falls flat straight from the start.  “Good Day” is easily just a big average, cookie-cutter action film, focused squarely on gunfights, shootouts, chases and explosions–but just about little else.  The film is so empty and lacking in depth at the core, you’ll walk out wondering if they should have just stopped with the last film, “Live Free Or Die Hard,” which was actually above-average–and which had everything that “Good Day” lacks, mainly, a good plot, good acting, good suspense, good action, a good script, and good direction.

“Good Day” represents the first real, crumbling, rusty weak link in the “Die Hard” series, as this series miraculously produced four quality, entertaining action films that somehow maintained their freshness and vitality in four sprawling, hugely-produced, hugely-budgeted somewhat-epic (for an action film, now) productions from 1988 to 2007:  “Die Hard” (1988); “Die Hard 2” (1990); “Die Hard With a Vengeance” (1995); and, as mentioned, 2007’s excellent “Live Free or Die Hard,” which, according to some reports, was the most financially successful film in the series.  Well, “Live Free” director Len Wiseman won’t have to worry much about “Good Day” overtaking his film—“Good Day” will possibly have a big opening weekend, but should sputter out and fade away as the word gets out about how disappointing it is on all levels.

One of the best descriptions you could say about the previous four “Die Hard” films—much like the Bond series—is that each one had a unique mix of drama, action, comedy and adventure, combined with some degree of intelligence, great casts of real, actual actors and overall quality filmmaking—and they loomed far above the rest of the average, run-of-the-mill action-adventure bombs that Hollywood suits insist on dropping on the public every year.  The “Die Hard” films were certainly better than most of the dumb action-adventure films by Willis’ cohorts in action spectacle during the 1980s and 1990s, Arnold Schwarzenegger and Sylvester Stallone.  Sure, the latter two had occasional hits and surprise standouts, but, again, overall, most of their action works were overshadowed by the “Die Hard” films.

Until now.  Interestingly, in these sluggish, somewhat embarrassing first two months of 2013 for first-run films (thankfully, the wide releases of the quality, prestige films from 2012 are enjoying great success), all three of these action vets have had new—and terrible—new films released.  Schwarzenegger’s “The Last Stand” provides easy fodder for a thousand jokes about his own last stand at the action box office (much like “Good Day’s” title provides a thousand excuses for literary analogies–yes, including the first sentence in this review), and Stallone’s “Bullet to the Head,” well, arrived in theaters like, well, a bullet to the head.  Additionally, Jason Statham’s “Parker” didn’t quite connect, either, and who knows what to expect from Dwayne Johnson’s “Snitch.”  If “Snitch” is a huge critical box-office success, there’s hope in the world for action films.  But that’s unlikely. This is not to say that the occasional, surprising successful action film doesn’t exist—“Skyfall” is excellent, the first two Bourne films were excellent, and every now and then, a small surprise appears.

But the main point still stands.  Hollywood throws too many cookie-cutter blow-‘em-up-real-good moronic action-adventure films into the theaters.  And with modern computer technology allowing filmmakers the freedom to produce huge green-screened and computer-generated-imaging scenes, set pieces, spectacles, crashes, chases, explosions, destructions, bombings, accidents, collisions, gunfights, chases, fights, battles and whatever machismo macho militaryesque mayhem monstrosity you want—in the end, most of the standard action is never new or fresh or impressive or innovative or inventive anymore.  It all ends up blurred and rushed and frenzied and battered over your head like a thousand machine guns, helicopters, sledgehammers and automatic weapons and huge trucks and bombs bashed over your skull until it approaches the level of cinematic torture, and all you want to do is yell, “Stop! I confess! I want to see more explosions! I want to see more car crashes! I want to see more fistfights and shootouts! I know where the [something] is hidden! I’ll tell you! Just stop! Please—she’s my only daughter! The file is hidden [someplace]!”

As for “A Good Day to Die Hard,” this dumb exercise is the latest example of this beat-you-over-the-head, technological overload, sensory overload, overdone, vapid, insipid, and empty action-adventure film.  The story is weak from the start, the plot points—even in an overly-done, somewhat-fantastical action world—are literally laughable, the acting is mundane, and the story is overly simplified.

The film is edited and directed in that load, obnoxious manner that is too loud on the sound meter, edited too fast and frenetic, paced too fast and frenetic, acted too broadly, directed too clumsily (by the kid-in-candy-store John Moore) and, overall, so singularly focused on explosive action set pieces, or elaborate scenes, there is nothing left to ponder but that lame story, that clunky acting (except Willis, but he’s not given much inventive dialogue to work with, so his acting skills and formidable presence are wasted on a bad script) and that mad rush of one action scene to another action scene.  Meaning, there’s nothing beneath the surface to think about, in terms of deeper meanings, messages and themes.  The scriptwriters (Skip Woods and Jason Keller) tried to achieve something along the lines of meaning, with McClane attempting to reconcile with his son, but even this is handled overly simply, awkwardly, and without any capable, intelligent backstory to flesh it out.

“Good Day” attempts to tell the story of John McClane traveling to Moscow to try and get his son, Jack (Jack! You were mentioned briefly in one of the earlier films, but we hardly have known ye! Where did you come from?), out of prison for what seems to be some oddball crime but finding out once he gets there that Jack is, lawdy mamma, a CIA agent!!  McClane—you mean you didn’t know for all these years that your son worked for the government? Really?! And Jack’s smack in the middle of some widespread, clandestine spy caper operation mission involving corrupt Moscow politicians, a political prisoner, cryptic spy files that everyone must have even if it means killing anyone in their path and destroying most of Moscow’s infrastructure (scenes that were actually filmed in Budapest), beautiful women spies, twists and turns, stolen plutonium, and even a cameo appearance by that radiation-ravaged wasteland, Chernobyl.

John and Jack (the sturdy, barrel chestedd Jai Courtney) find themselves trying to get the political prisoner, a whistleblower, Komarov (Sebastian Koch), to safety while dealing with a corrupt politician, Chagarin, and his thugs.  John and Jack—with seemingly little help from the CIA and our other 20 or so intelligence agencies except for, apparently, the only other agent stationed in Moscow!!—trudge around Moscow dodging bullets while Chagarin and his henchmen either try to get a key for a vault containing the plutonium or try to kill as many people and trash as many cars and highways as they can in Moscow.  They want the key, and they want Komarov and the McClanes dead.  Meanwhile, John and Jack—who calls his father John and, initially, tells his father to go away and actually points a gun at his dad’s head—somewhat reconcile and connect in that distant, don’t-touch-me, don’t-hug-me, Neanderthal way that men in action films tend to act.  It’s all very non-touching, and it’s all very non-deep.  The henchmen, Komarov, the McClanes all come together at Chernobyl at the end, there are more explosions, John and Jack do connect and stop pointing guns at each other, everything explodes, most of Moscow’s cars, bridges and streets are destroyed, and the bad guys all die in explosive, gruesome manners that should satisfy action moviegoers bloodlust and blood-thirst and blood-fetish.

The one sad part of all of this failed exercise is that the very real, very appreciated and very impressive talents of literally hundreds of talented, experienced and hard-working stuntmen, stunt drivers, set designers (quite elaborate sets are presented that do accurately present a Russian aesthetic, in cities, on streets, in ballrooms, courtrooms, safe houses and at nuclear power plants), set dressers, mechanics, cameramen, pilots and computer, sound, pyrotechnic and affects artists are somewhat wasted. Their work—elaborate and, yes, challenging and successful car chases, car crashes, gunfights, helicopter attacks, armored car stunts and explosions are performed—is all fully up on the screen and staged and presented well, but unfortunately they are all at the mercy of Moore’s frenetic, over-done direction, timing, pacing and storytelling.  It’s unfortunate, but even the most elaborate stunts and action sequences can get lost when the over-arching, prominent aspects of basic filmmaking are not present to allow them to be presented in an intelligence framework.

The story of the father-son relationship—which is always important and pertinent in life, of course—needed to be fleshed out, with a prominent sub-plot and backstory, flashbacks, explanatory dialogue and scenes, more depth, and a better script.  There needed to be some down time between the chases and explosions, with appropriate backstory explained in more detail, and the story and film and pacing needed to take a breather every 10 minutes.  And those laughable plot points—no one on the set suggested corrections to help set things straight? Everyone must have been focused on the execution of the next elaborate action sequence.

The filmmakers just simply should have examined, studied and looked closely at “Live Free or Die Hard,” which, once again, had everything that “Good Day” lacked. If you haven’t seen “Live Free or Die Hard,” definitely see this film—it’s a great post 9-11 examination of modern-day paranoia, cybersecurity threats, government ineptitude against frantically changing and challenging technology, and generational and cultural differences between old-school types like McClane and the younger, crazed, generation-something types with circuitry invading their brainwaves so accurately portrayed by Justin Long and Kevin Smith.  Smith’s small supporting role could stand as his best project in film.  And the villains in “Live Free”—Timothy Olyphant’s equally cyber-smart and chillingly and terrifying devoted patriot gone psycho and Maggie Q’s beautiful and cold-hearted lover and aide—provide expert counterparts to Willis’ and Long’s battered heroes.  And the contrast in style, culture, generations, approaches and personalities between Willis’ and Long’s characters was classic, entertaining, interesting and smart.

Once again, none of that appears in “Good Day.”  As always with Hollywood, the suits just don’t know when to stop with their precious series.  Someone should have issued an edict that “Live Free or Die Hard” was a great way for the “Die Hard” series to bow out—and a great way to allow Willis to move on to more intelligent roles.

It’s a good day, actually, for Willis, Schwarzenegger, Stallone, Stratham, Johnson and all of their counterparts to enjoy their millions, leave the dunderheaded, boneheaded, cookie-cutter action films behind, and move on to deeper, more intelligent, and better, films.  When that happens, possibly, that could be a good day to go to the movies.