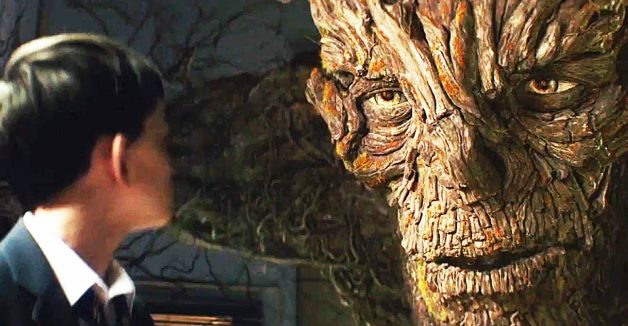 “A Monster Calls” arrives at the end of 2016 as yet another stellar, intelligent and entertaining—and, especially, original, unique, introspective, moving, emotional and extremely well-acted and well-directed–entry in the fantasy, science fiction and supernatural genres during a year that saw many above-average films in these filmic areas.  But several notable writing, acting and directing achievements in the film help “A Monster Calls” rise above other genre films from 2016, most notably the highly emotional, dramatic and thematic elements that sustain the film—to the point that this particular fantasy film is definitely for older teens and mature adults looking for something more serious, more dramatic, more reality-based, and even darker, gloomier and grittier than the average fantasy, sci-fi and supernatural film.

Thus, parents and younger teens should be forewarned that “A Monster Calls” is, again, not your average fantasy film, and filmgoers attending the film should be aware that this movie is very serious, heavy, dark, and emotional, to the point that the film lacks the usual lightness, humor and in-jokes that are usually seen in fantasy films.  “A Monster Calls” is first and foremost a serious dramatic film, with elements of fantasy to support the basic story structure, plot and character, plot and story developments.  The film is most certainly not a lighthearted, funny, warm and fuzzy romp through fantasy lands and adventures—but, still, the film does present a unique presentation and approach to blending straight drama and emotion with the aforementioned elements of fantasy and the supernatural.

If filmgoers are aware of the film’s thematic elements going in, and if filmgoers realize that this is a film that strives to make filmgoers not only think deeply about many of the very basic elements of life—love, family, family relationships, coming of age, death itself and life itself, as well as the very human, basic need for love, friendship, relationships, caring and dealing with the very darkest, very saddest aspects of life and growing up—then be prepared to be completely blown away by the movie’s intelligent, intellectual examinations of the basic foundations, tenets and building blocks of nothing less than life and death themselves.  This intelligent, probing film will make people think about life and death in new ways, and will make people stop and think about the relationships among family and friends and just how important these relationships are in life, every day.  The film will also help people deal with aspects of life and death that do indeed occur in real life—and what could be more important than that?

Besides the serious, smart story, plot, character and thematic elements that make “A Monster Calls” such a good film, there is one particular aspect that also stands out strongly, amazingly and impressively—the simply extraordinary, amazing acting performance by the lead character, Lewis MacDougall, a brilliant—yes, brilliant—young Scottish actor who is now 14 years old, but who must have been 13 or 12 when filming occurred.  To see such a controlled, in-depth, emotional and moving acting performance by any youth is impressive, but MacDougall simply turns in during “A Monster Calls” one of the best acting performances by a youth in years—yes, in years—and one of the best, if not the very best, performance by a child during all of 2016 in film.

Throughout this film, young Lewis remains captivating in a role that is not easy for anyone, no matter their talent—his character is not going through a fun, lighthearted time, and must deal with all types of conflicting, up-and-down, very emotional, very heart-wrenching, powerful feelings, emotions, situations, interactions, relationships, moods and character development.  The role is not an easy acting role, and Lewis delivers a powerful, stirring, moving performance that will leave filmgoers with a renewed appreciation for young child actors!

It’s not an understatement to say that Lewis MacDougall delivers in “A Monster Calls” an acting performance worthy of awards, accolades and attention from directors, producers and casting agents—his work in the film should be a wake-up call to filmmakers to quickly cast this young actor in their films.  MacDougall also provides another positive reminder that there are some incredibly talented young actors currently working in film today—Thomas Barbusca, Asa Butterfield, Daniel Huttlestone, Steele Stebbins, Kodi Smit-McPhee among them.

MacDougall delivers his powerful, emotional performance with steady, underhanded and assured confidence, holding his own—or even dominating and stealing the spotlight—in scenes with a cast that includes other stellar performances from Felicity Jones, Liam Neeson, Toby Kebbell and Sigourney Weaver.  The young actor is to be commended for his performance in “A Monster Calls,” and MacDougall simply carries the film with his performance.

“A Monster Calls” tells a tale about a young pre-teen boy, Conor O’Malley, in England who is having a tough time in life.  His beautiful, young, caring mother—a powerful Felicity Jones, in a dramatic, reality-based performance that is a complete turnaround from her action heroine role in “Rogue One: A Star Wars Story”—is dealing with terminal cancer while also trying to raise her son.  Conor—who is a smart, sweet and caring boy—is irrationally, stupidly and ignorantly bullied and picked on in school by other boys who don’t understand him and are threatened by his quiet nature, introspective personality, old-soul presence, and his concurrent inner toughness, smartness and independence.  On top of those horrible aspects of life, Conor misses his dad, who lives half a world away in Los Angeles, and he has to deal with a steely, rigid, not-too-fun, overly conservative grandmother, played with firm, old-fashioned iron-clad strictness and firmness by Sigourney Weaver, who also delivers a stand-out performance.

Amid all of this calamity, Conor is visited one night—and, ultimately, on subsequent nights—by a monster who is also a towering, hulking, somewhat intimidating tree—think of a bigger, darker, more dangerous, more gloomy and serious Groot in terms of appearance—and this monster tree is no ordinary monster.  This is a monster with a serious calling.  When he arrives, he tells Conor that he will guide the boy, tell the boy stories that will help him in life and teach him life lessons, and will challenge Conor to work with the monster to understand nothing less than important lessons about love, family, growing up, life and death.  And the monster does not take a traditional approach—his lessons are starkly direct, to-the-point at times, yet also concurrently steeped in mystery, puzzles, riddles and fables, morals, messages and themes designed to lead Conor on a path of discovery, introspection, education—and awareness.  The monster appears to Conor in a manner that exists to simply and intricately, grandly yet subtle, intimidating and helpful, to help Conor survive, navigate, learn from and deal with the very worst that life can throw at someone.

The evolving, growing and developing—and complicated–relationship between the monster and Conor is fascinating—and yet, even difficult, at times—to watch.  The relationship is not easy, not pat, not fairy-tale-easy, and not simple.  The monster is unpredictable, layered with what appear to be contradictions and obstacles, and he works in mysterious ways.  Conor, also, is your average, typical, independent pre-teen, set in his own boyhood ways, personality quirks and rebellious, stubborn manners—your typical young, pre-teen boy.  The two seemingly contrasting personalities and beings—a young, pre-teen boy struggling with serious problems and a towering, intimidating, growling, at-times-confusing monster tree—eventually do develop a loving, trusting relationship after a series of trevails, life lessons and learning curves, and to watch the developing relationship—and what that means in relation to the developing story at hand—is yet another emotional, dramatic journey to enjoy and appreciate in the film.

Meanwhile, Conor is also undergoing equally difficult, complex, layered and developing relationships with his mother, father and grandmother.  Toby Kebbell turns in yet another strong performance, in an underhanded, controlled manner, as Conor’s confused, yet understanding and caring, dad, who is trying to deal with the terminal illness of his separated wife, Weaver’s dominating and controlling mother-in-law, and a young son who doesn’t understand why his dad lives thousands of miles away, and why he, his dad and his mom can’t be together like other families.  To watch the pain and difficulty in this strained father-son relationship is painful and emotional, but, again, the acting performances are so impressive, the actors’ talents to make the story relevant carries the viewer through the painful moments.  The same can be said for Jones and Weaver in their performances—their characters are painful to watch, but the acting is smart enough so the viewer can understand the reasons and motivations for their respective characters’ actions.

Eventually, in a manner that is as uplifting and positive as the dark story can allow amid the tragedy of a cancer fight by a boy’s mom, a boy dealing with a monster substituting as a role model and life teacher amid life tragedy, a father living thousands of miles away, and a stern, rigid grandmother who does not quite connect with her grandson, all of the main characters learn from each other, learn their own life lessons about love, life and death, and all of them eventually help each other, love each other, and help each other get through the darkness in their own manners.  Eventually, Conor and the monster come to an understanding and agreement, and the boy realizes that the monster was there all along to help him, teach him, guide him and save him from completely falling into total despair from what is going on in his life.  The monster is there for a reason, and it’s an important reason, and Conor learns this through the story.

“A Monster Calls” is not your ordinary, average, everyday fantasy film—and that is exactly what makes this film unique, original and excellent.  Kudos must go out to director J. A. Bayona, who manages to make a dark, serious, dramatic film with sorrowful story aspects watchable and respectable; screenwriter Patrick Ness, who adopted the screenplay from his book and retains a unique and creative approach to the storytelling throughout the film; and the production, set, make-up and special effects artists, who just happen to add above-average, impressive special, visual, model and computer effects to the fantasy aspects of the film that assist the fantasy elements but never distract from the serious, dramatic, intelligent storytelling in the movie.

“A Monster Calls,” along with the equally-entertaining “Rogue One,” provides a nice finish to a great year in fantasy, science fiction and supernatural films during 2016; presents a quite original addition to the catelogues of fantasy films, dramatic films and coming-of-age films; and, again, presents a stand-out acting performance by Lewis MacDougall.  The film is highly-recommended.

In the end, Conor comes to realize why the monster visited him; he learns how to deal with the very serious twists and turns in the crazy road that is life itself; and he learns about and comes to understand the deeper inner importance of the very real nature of love, family and life that provide the basic, important lessons and foundation of life itself.  And filmgoers should learn a bit about life, family and love, too, from “A Monster Calls”–and one can’t ask for much more than that from watching a stirring, moving, emotional, excellent film.