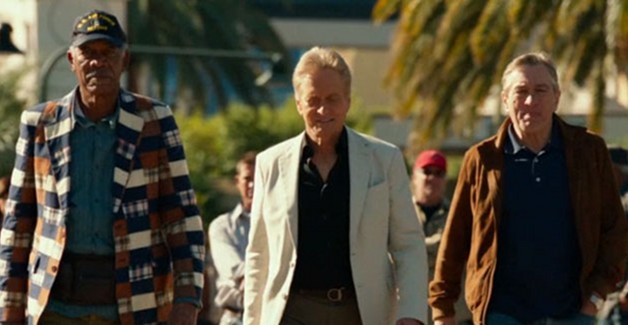 Unless some investments went horribly south, or perhaps some gambling binges went terribly wrong, veteran actors Robert DeNiro, Michael Douglas, Kevin Kline, Morgan Freeman and veteran director Jon Turteltaub should have some pretty healthy, secure and comfortable bank accounts. That, in turn, should afford all five men the time and freedom to pick and choose only intelligent, thoughtful, productive, provocative and quality film projects–projects that contribute in some positive, respectable manner to the arts, film, culture and society.

So it is a mystery worthy of Hercule Poirot just why on earth DeNiro, Douglas, Kline, Freeman and Turteltaub entered some berzerko time warp, some mysterious twilight zone, some puzzling alternate universe, and ended up acting in, and directing, the entirely, awfully, decidedly dumb, thoughtless, un-productive, un-provocative and terrible “Last Vegas,” which is nothing more than a waste of time, talent, money and filmic resources.

This terrible, cliched, tired and lazy film attempts to be a comedy with heart, and there is some scattershot comedy and some heart, but overall the whole thing is one huge stinking cliche piled on top of other rotting cliches–not the least of which is the continued bad-Hollywood habit of presenting senior citizens as some types of zombified, mummified, depressed, down-and-out, doddering doofuses–instead of the smart, intelligent, wise, experienced, productive and very active members of society, which they are.  This film also presents the similar cliched habit of presenting film representations of stereotypical youthful vigor as the ability to drink alcohol (yes, that will get you very far in life, indeed), dance stupid dances (this, too, will improve your career and educational life experiences), go to tacky and over-priced clubs (never a waste of time, of course), and make fun of older people (such intelligent social and cultural behavior).  Sigh.

The film also makes a huge cliched mistake of just simply having the film set in Las Vegas–which is yet another tired cliche. We don’t need any more films, television shows, stage plays, comic books, novels, short stories or anything, really, set in Las Vegas. For at least the next one hundred years or so.

Hollywood, or perhaps the White House or the U.S. Department of Health and Human Services, should just institute a moratorium, punishable by community service and jail time, on films and television shows that insult and offend the world’s senior citizens; that insult and demean people in their twenties and thirties; once again, on films that are set in Las Vegas or any other gambling town in Nevada or New Jersey; and on films that are as cliched, tired, dumbed-down and doddering as this one.

The talents of DeNiro, Douglas, Kline, Freeman and director Turteltaub (he previously directed the excellent “Phenomenon” and the two excellent “National Treasure” films) are horribly, terribly, sadly and embarrassingly wasted in “Last Vegas.”  They all seem to be slumming through this mess, somewhat aware that the entire project is an easy paycheck, a vacation in Vegas—and a failed exercise that is far beneath their respective talents.

Just what, exactly, prompted anyone to participate in this failed exercise?

The answer can’t be the script.  This smelly, horrid mish-mash, credited to an unfortunate Dan Fogelman, who must have written this under duress, hypnosis or a near-fatal dose of Nytol, presents scenes and situations that you will swear–correctly–you’ve previously seen in 500 previous tired, cliched films.  The story, characters, setting, scenes and dialogue appear to have been lifted from so many films, you would have to consult “Leonard Maltin’s Movie and Video Guide,” which advertises “more than 19,000 capsule movie reviews,” to list them all.

The answer can’t be the setting. Are DeNiro, Douglas, Kline, Freeman and Turteltaub so desperate for a social outing and a fun vacation that they have to sign on this torture exercise to spend some time in Las Vegas? If their bank accounts are where they should be, the four of them could probably purchase half of the bankrupt Vegas strip, and add to the shopping cart some of that once-valuable property in the recession-shattered Clark County.

The answer can’t be the intellectual depth of the film. Because there isn’t any.

Oh, all five men will scoff and cough and get angry at this attack and say, maybe, if they’re in a purely promotional mood, “Lighten up! This is just a comedy! It’s supposed to be fun! It’s just for laughs! We are entertaining you!”

A very quick response would be–Misters DeNiro, Douglas, Kline, Freeman and Turteltaub, I grew up with comedy, I know comedy, comedy is a friend of mine–and “Last Vegas” is no great comedy.

The problems start with the basic story and plot set-up–and the problems continue through to the literal end scene.  Four childhood friends in what appears to be 1950s Brooklyn, or somewhere in New York City, Billy (Douglas), Paddy (DeNiro), Sam (Kline) and Archie (Freeman) are initially presented as some kids who are close and clearly care for each other. They make an initial pact to remain friends, and that’s nice, and you can’t be too upset with that set-up–except it’s the literal same film set-up seen in those previous 500 films.  The scene appears to have been lifted from hundreds of coming-of-age films; maybe this was just left-over stock footage from “Stand by Me” (1986).

Next, the film jumps 58 years later–a quick change that is presented as an obvious joke–and the last remaining single member of the group, Douglas’ irritating, jarring, unpleasant and sleazy Billy, has decided to get married. He’s in his late 60s, and he’s marrying a beautiful woman in her thirties. Really, good for anyone in their late 60s who can pull that off, and that is not said in a sexist or offensive manner, but in a complimentary manner. But Douglas’ Billy character is so skeezy, sleazy and weezy–so thoroughly unlikeable and hate-able–you actually don’t picture Billy marrying anyone except, perhaps, Norma Desmond or Carrie’s mother, as played by Piper Laurie.

So Billy naturally–naturally, because this is what all men in their late 60s do, and that’s not said in a derogatory or insulting manner–decides to have a bachelor’s party in Las Vegas on the weekend before his marriage, and he invites the old gang out to Sin City to party down.  So the men, each presented in initial scene set-ups as suffering from some type of indescribable lethargy and laziness and depression, despite each man’s obvious still-healthy bodies and minds, overcome their oddball problems and aches and pains and worries, pack up their rolling suitcases and head out to Las Vegas.  These initial scenes are handled so sloppily, so silly, so moronically, it’s a wonder anyone had the energy to get up and film them.  Perhaps the physical tiredness of the characters were symbolic or the intellectual tiredness of the script, dialogue and writing–but that’s far too existential for this film.

Anyone who has seen more than fifty films can guess–correctly, scoring an A–what will happen next. Will there be some past pseudo-tragic life problem between two of the characters? Of course. Billy and Paddy have some past girl, relationship and anger issues that could have been solved with a few simple conversations, but have somehow festered, like the script, for years.   Will there be a renewed battle between Billy and Paddy over a newfound love, providing a nifty, simple connection to the past girl problem? Of course there will! Everyone falls in love in one weekend in Vegas–even in attempted comedies! Will the men get drunk, get in a fight, dance in a club, charm some younger women, get all macho-like with some younger men, learn about these newfangled club customs, dance moves, automatic curtains, gadget-filled rental cars and new alcoholic drinks?  Will the men eventually make connections with these derned, darned younger folks? Will there be–somehow–a big party in the men’s elaborate suite in their hotel? Will there be gratuitous shots of hot, beautiful young women, their breasts, their hind quarters and their legs? Will there be a thousand and one jokes about getting old, health problems, tired relationships, grandchildren, retirement and deteriorating physical and mental qualities?

Have you seen “Cocoon?” If not, forget about “Last Vegas” and rent “Cocoon,” (1985), which presents all of these problems in a smart, well-written, well-constructed context that includes intelligent, insightful, original and emotional writing, wonderfully human and humane direction by Ron Howard working at the top of his abilities, and such superb acting by the great Don Ameche, Wilford Brimley, Hume Cronyn, Brian Dennehy, Jack Gilford, Maureen Stapleton, Jessica Tandy and Gwen Verdon, you wonder just how a film supported so many brilliantly talented thespians.  “Cocoon” is a classic, and a film that tenderly, sweetly and caringly approaches life, love and growing old in such beautiful moments, you wonder if anyone involved with “Last Vegas” had ever seen the film.  Because if they had, and if they remembered this great film, they would not have written, acted in or directed “Last Vegas.” Most likely, they all have seen “Cocoon,” but they put it out of their minds while filming “Last Vegas” in what appears to be a three-week shooting schedule.

The problems with “Last Vegas” are not that the writer and actors and director didn’t try to eventually redeem their characters and have them win out over the pesky younger folks, past differences and the foibles of aging. The problems are that the writing is so shallow, the acting so pedestrian–yes, pedestrian–the acting so unfunny, the script so unfunny, and the directing so amateurish, the attempts at heartfelt sentiment get buried beneath the overwhelming mediocrity.

One shining aspect of “Last Vegas” is a beautiful, and beautifully-written–for most of the film–character played by the still-sizzling Mary Steenburgen, a down-to-earth lounge singer named Diana. But, incredibly and strangely, the film even screws up this element. How the film ruins Steenburgen’s character will not be explained here, but everyone who is unfortunate enough to sit through this film will see what the problem is–and it’s explainable only as an easy plot device.  But in the early scenes, Steenburgen briefly stands as a lone voice of reason and thoughtfulness–until, apparently, the character gets symbolically bonked on the head and loses her mind.

The film even wastes the possibly intriguing scenic possibilities of Vegas itself. Possibly interesting, real-life Vegas settings in the sprawling hotels and slots rooms and poker rooms and theaters are wasted, or not shown at all. All you see is some touristy attractions, the usual marriage chapel, the usual lounge, the usual elaborate penthouse room, and the usual tacky, icky and sticky nightclub. You don’t get a feel for the real Vegas–you only get a feel for Hollywood scriptwriting, conference-room Vegas. And that’s even worse than the real Vegas trappings.

One more huge problem is that Billy and Paddy are so thoroughly unlikeable, you don’t root for them or care about them. You just want them to go home and get some rest, for gawd’s sake.  Get off that Vegas hotel lawn! As for Kline and Freeman, they maintain very small levels of dignity here and there, but, once again, the script calls for their characters to make slight fools of themselves, thus ruining the very little likeability factor established for Sam and Archie.

As for Turteltaub, how someone can go from directing the excellent, thoroughly-entertaining “National Treasure” films (2004 and 2007) to somewhat directing this drivel, we’ll leave that mystery to Mr. Poirot.

At this point in their respective careers, DeNiro, Douglas, Kline, Freeman and Turteltaub should not be slumming through slop like this, collecting easy paychecks and wasting their time and talent.  “Last Vegas,” it must be said, is all out, loses all bets, busts, and, in the end, ends up just simply being as tacky and tired and depressing as its Vegas setting.