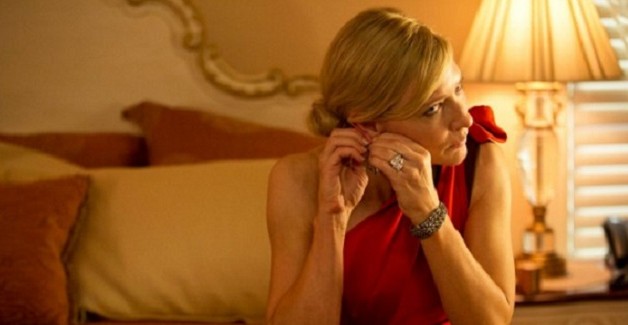 “What if everything is an illusion and nothing exists? In that case, I definitely overpaid for my carpet.” Jasmine French (in a scenery-chewing Oscar-worthy turn by Cate Blanchett) could well echo that ’70s Woody Allen line with un-ironic despair. Our broke but brand and status conscious heroine has every reason to. As her Upper East lifestyle goes south, she totters from her many padded luxuries to a possible padded cell. Blue Jasmine is as much about the gap between the poor and the rich as it is about the gap between reality and illusion. Annie Hall or Manhattan this isn’t, but this timely cautionary tale on one percenter materialism is Woody Allen’s first strong offering after years of mostly sloppy canned comedies. Blanchett plays a Ruth Madoff version of the high-strung southern lush of A Streetcar Named Desire role she played a few years ago on stage. Blanchett as a blingy modern-day Blanche Dubois is more culpable, no less lost, and just as riveting. It is probably tougher to be given light lines and heavy material, and skirt the line between satire and sympathy. There are sound performances all around, but it is on Cate Blanchett’s twitchy, despairing face, grandly gesturing arms, italicized words, and elegant, entitled shoulders that the movie rests.

When Jasmine loses everything and has to move out of New York, Allen places her not in New Orleans, but in San Francisco. He doesn’t showcase the city as you’d expect from his multiple New York-based films, or his beautiful city-specific hommages – Vicky, Christina, Barcelona and Midnight In Paris. Maybe it’s just as well – some of us are still reeling from the way he presented To Rome With Love with embarassing travel-guide gusto, with Volare cheesily blasting over the opening credits.

The last time Allen looked at a working class setting before Blue Jasmine was probably in The Purple Rose of Cairo nearly three decades ago. (What next, Pink Daffodil? Black Dahlia is taken.) Where earlier Mia Farrow dodged New Jersey’s Depression-era drudgery via B/W musicals, Cate Blanchette escapes her newly humble surroundings with nervy flashbacks into her privileged Park Avenue past.

Deluded, designer-togged Jasmine French (upgraded from Jeanette, because her given name just wasn’t fancy enough) once had it all – a second house in the Hamptons, posh friends with ponies and jet planes, an Ivy League-going stepson. Her rich investment broker husband makes good money off his Ponzi schemes. Denial (hers) meets duplicity (his) at a mutually-agreed-upon point (avarice). But then it transpires that Hal isn’t just cheating the government, but also cheating on Jasmine, and things turn ugly. After the scandal, with all their assets appropriated, a shattered Jasmine is left a widow with nothing. She has no choice but to move in with Ginger, the same anxious-to-please foster-sister whom Jasmine treated with thinly veiled disdain when she and her construction-worker husband, Augie, visited her in her fancy New York house. This is the same Augie (Andrew Dice Clay in a heartfelt, earthy role) whom Hal diddles out of an $200,000 inheritance that would have given Ginger and Augie their only shot at a better life.

By the time Jasmine goes to meet her, Ginger is a cheerful grocery-clerk, and no longer with Augie. Jasmine grabs at her Xanax and her Stoli vodka, disapproves of Ginger’s small house, the noise her two sons make, and her new mechanic boyfriend (Bobby Cannavale as the ripped, blue-collar, mercurial, but surprisingly decent, Chili). Ginger and Chili are clearly much nicer stand-ins for Tennessee Williams’ Stella and Stan Kowalski. Jasmine’s arrival in San Francisco’s Mission area, just like Blanche’s arrival in Elysian Fields, is where the movie begins.

Jasmine takes complicated computer classes so that she can do online design courses (why? is it something a clueless socialite would do, or an old director too vague about how these things work?). Her job with a dentist (Michael Stuhlbarg from the Coen Brothers’ A Serious Man) doesn’t pan out. She’s too picky, and things get icky – she doesn’t like her work, her letchy boss likes her too much. So she leaves, has meltdowns, and clutches her Xanax and her Stolli vodka even more fiercely.

Things start looking up when Jasmine meets Dwight, a nice diplomat (Peter Sarsgaard). They go buy a bed together, and are sold on each other. She sees him as her passport back to her life of luxury. He sees her as the perfect trophy wife for his political ambitions. She lies about a glamorous job (an interior decorator), a glamorous ex (a surgeon who died). Will karma be a snitch? Will her murky past bite her in her Pilates-toned ass, and her Luis Vuitton-ed emotional baggage get too much for Dwight to handle? Will her new stitched-up persona (as well-tailored as her shimmering gold and ecru suits) begin to fray at the edges?

This film boasts solid performances all around. Sally Hawkins is true to the spontaneous Mike Leigh personas she has played in the past. Alec, the only one here who was directed by Woody Allen before (in Alice), is a pro here as a slick con and a cad. Bobby Cannavale and Andrew Dice Clay are very authentic as Ginger’s two men. We have decent acting by Michael Stuhlbarg, Peter Sarsgaard, CK Louis (no funny jokes) as the third man that Ginger is briefly taken up with. Blanchett’s acting supersedes the film – Annie Hall or Manhattan this isn’t.

Blue Jasmine is really about Jasmine and Hal’s moral bankruptcy more than their financial one. They are the brittle face of today’s America – we are confronted everywhere with new forms of greed and class. We are seeing several movies this year on ill-gotten money and shallow upward mobility, from the great Great Gatsby to the flimsy Bling Ring. This is a timely topic – we have an emergent society of people who know the price of everything, but the value of nothing. The very real possibility of lives unraveling because of this sad fact is what makes this a tragedy.