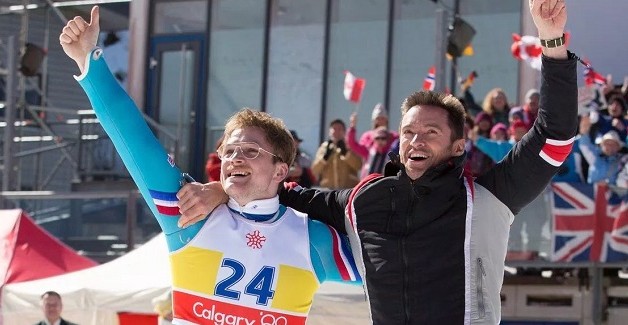 Arriving amid the bleakness and darkness of winter and the concurrent bleakness and darkness of the current presidential campaign, “Eddie the Eagle” arrives in movie theaters as a most welcome blast of encouraging, enriching, uplifting, positive and–clichés be damned for once—feel-good, crowd-pleasing entertainment that indeed will have audiences cheering, clapping and smiling.  Yes, the preceding phrases are horrible, passé clichés that break all writing, reviewing and critiquing rules—duly noted–but when a film this confidently positive and just plain good-hearted arrives in general, and more specifically, when a film this positive and good-hearted arrives as an above-average, well-crafted, well-acted and well-directed film, and, even more so, when such a good film arrives as a movie that—again, clichés be damned—all ages and demographics can thoroughly enjoy and embrace, well, it is a cause for celebration.

There have been previous above-average films already in 2016—“Hail, Caesar!” and “Deadpool”—but both of those films are for more mature, adult audiences, and that’s not a negative for either of those films, it’s just that’s their particular distinction. But, again, “Eddie the Eagle” can be as easily enjoyed by young kids and teens as adults of all ages.  And there’s no fantasy or science fiction genre specifics, pop culture cultural time period constraints, or alternative-leaning story quirkiness to consider with “Eddie the Eagle,” because, once again, and it’s worth noting, it is a film for all ages, in terms of chronological ages and time periods.

“Eddie the Eagle,” which tells the true story of  Great Britain’s first Olympics ski jumper competitor, Eddie “The Eagle” Edwards, who came of nowhere to become the 1988 Winter Olympics’ Unsung Hero and Official Crowd Favorite, is simply highly-recommended for everyone.  Definitely go out to the theaters during the next few weeks and see this film.  You—cliché alert!—will be glad that you did.

The reason for these clichés here is that sometimes—not too often, but sometimes—some films are simply easy to interpret, understand, embrace, enjoy—and recommend.  That is the case—and it’s not to its detriment—with “Eddie the Eagle.”  The film itself is even a little clichéd—but it doesn’t matter and it doesn’t destroy the huge, lovable appeal of the movie, thanks to the intelligence, talent and creativity of the cast and crew.  And, sometimes, the simplest way to get across to people a very simple message to go out and see an intentionally uncomplicated—but still intelligent and enjoyable—movie is to simply avoid any unnecessary deep analysis, introspection and intellectual cranial exercises and just get straight to the point.  “Eddie the Eagle” is that type of film—it arrives with no pop culture baggage, legacy and high expectations, like, say, with the latest “Star Wars,” James Bond, “Jurassic” or “Hunger Games” film, and with no attendant convoluted, deep intricacies, complications or challenges.  “Eddie” is simply what is sets out to be—a feel-good, crowd-pleasing, celebratory story about a true-to-life, genuine sports hero who overcame great obstacles, challenges and prejudices to become a true sports—and life—hero to millions of people!

But “Eddie” succeeds not just because of its subject matter alone—“Eddie” succeeds, again, because it’s an excellent, well-made film.  There have been scores of true-life-based autobiographical sports films that were based on positive, encouraging stories that should have been successes, but tragically failed, due to numerous filmic reasons, including poorly-written scripts; stilted, amateurish direction; lackluster and shoddy production; and even poor acting, editing, pacing, timing, art direction and cinematography.  Film history, alas, is littered through the ages with underperforming, underachieving, losing sports movies that unfortunately end up in the loss column of movie releases.

“Eddie” ends up in the win column by simply by focusing on the filmic essentials and making sure each of those essentials were done on a high-quality level.  The script, by Sean Macaulay and Simon Kelton, intentionally leaves things uncomplicated and straightforward—which is good here, because there was no need to make anything more complicated than it had to be. Edwards really was Britain’s first Olympics ski jumping contender, he really did capture hearts of the crowd and the world, and he really was a man of supreme confidence, guts, courage and temerity.  So there’s no need to any additional storytelling, which often brings down many other sports movie autobiographies.  Edwards’ story is told with pure, good-hearted humor, sports confidence, guts, affection—and love.  There is plenty of love throughout the movie, and it is indeed moving, touching and emotional.  And that is due mainly to the script, which, yes, tells an uncomplicated sports story, but also manages to tell an uncomplicated story of confidence, love of family and love of people.  There is plenty of humor and caring and love mixed in with the sports tale.  That’s what makes a good sports movie—showing all the positive aspects of life help the positive aspects of sports, and vice versa.  “The Blind Side” similarly accomplished this feat in 2009.

Dexter Fletcher, “Eddie the Eagle’s” director, perfectly understands all of this, and he deliberately keeps the film light, airy, uncomplicated, straightforward, and easy-to-understand.  He knows how to balance the more-serious, emotional moments with the more humorous, lighthearted and cheerful moments—as any good director should know how to do.  He also knows how to handle his actors.

The wonderful, endearing and wholly understated Taron Egerton, who plays Eddie, plays Eddie, who was in his early 20s during the events in the film, as one of the most unconventional, unexpected, out-of-left-field, misunderstood and even confounding—but on a completely lovable level—sports heroes seen onscreen in quite a while.  Edwards, as portrayed in the film, was not your average, clichéd, generalized, stereotypical ideal of what most people view as an Olympics athlete—he is stocky, somewhat awkward—physically and socially, with short, messy hair and over-sized, Coke-bottle glasses and wearing second-hand, pilfered athletic wear.  He came from a middle-class, working-class family, and he had no money, no corporate sponsors, no big donors and no corporate, business or academic support networks.  And he speaks quietly, using few words, sometimes whispering or muttering softly his words.  He’s not ignorant, uneducated or shy, even—he’s simply a normal person.  And that’s exactly how Egerton expertly plays Edwards—like a real person.  Not like some overly macho, perfect-looking, shiny, glossy, pretty-boy, magazine-cover sports jock moron.  But, like a real person.  Actually, Egerton’s performance in “Eddie the Eagle” may just be one of the most pure, sly, real, unassuming acting performances in quite a while.  He makes Edwards real, with real quirks and oddities and personality traits, and, in the process, Egerton makes Edwards so completely real and modest, Edwards ends up being so lovable and endearing, well, yes, you just want to stand up and cheer him—like thousands of people actually did when Edwards competed at the 1988 Winter Olympics.

And the consistently wonderful Hugh Jackman—whose character, Bronson Peary was that shiny, handsome, stereotypical pretty-guy athlete, although with his own attendant attitude, personality and drinking problems—shows true character development—helping, too, the story and plot development—by crawling out of his bottles of despair and cynicalness, realizing that he can help Edwards, and realizing, too, that Edwards is the real deal when it comes to perseverance, determination, courage, competition and guts, and, by gawd, maybe he can really accomplish something positive in life again by helping out this young kid.   And it doesn’t spoil a thing to note that it is nearly as enriching, positive and encouraging to watch Peary change his stupid, downer and apathetic ways, get off his butt, get out of the bottle, and change, move forward and grab a chance to succeed again in life by helping Edwards.

Christopher Walken—also great here, as always—plays former athlete and coach Warren Sharp, who mentored Peary in Peary’s golden days.  There is additional story, plot and character development between Sharp and Peary, but those developments are better left unsaid and enjoyed as a quiet, beautiful surprise in the film.

Yet with all of these fine filmic qualities—an original and quirky screenplay, distinctive and original acting and sharp, inventive direction–lifting up “Eddie the Eagle” from the norm, from the clichéd, from the masses of other similar sports movies, there is one other additional element of the movie that helps the film soar—literally.  Since this is a film about a ski jumper—athletes who start at the top of frighteningly, terrifying huge, steep hills, race down those hills at crazy speeds, ski off an inclined ramp high into the air and then land on packed snow at a high speed from a high distance at a difficult angle—the danger, suspense, difficulty and sheer excitement of this particularly horrifying athletic exercise must be adequately displayed in the movie on a believable, understandable and relatable manner.

And that is exactly what occurs in the movie. Thanks to cinematographer George Richmond and an exceptional crew of daring cameramen, sound editors, sports technical advisers, special effects artists, stand-ins, athletes and stuntmen, “Eddie the Eagle” is filled with some breathtaking, astounding shots of skiing that hasn’t been seen on screen at this level in quite a while—soaring shots of skiers flying down the huge ramps, shots of the skis racing down their tracks, shots as the skiers leave the ramps and literally fly into an elevated expanse of air, wind and gravity, shots of skiers landing on the snow packs below—and, all the while, exuberant, joyous close-up shots of the skiers faces—and their emotions, a mix of fear, confidence, elation and suspense—as they go through all of these stages.

The camera work during these sequences is simply excellent on a filmic, technical, storytelling and symbolic nature.

“Eddie the Eagle” does indeed soar like Edward’s namesake nickname, and, yes, that’s another cliché.  So what.  Sometimes, even  clichéd films can overcome clichés, and they deserve clichéd admiration, simply because, somehow, as with “Eddie the Eagle, the film, its characters, its story, its embrace of love and affection, its good heart, and its good lessons can mean far more than clichés.  Eddie Edwards, with his unabashed enthusiasm, confidence, guts, perseverance and courage, proved that clichés don’t matter in sports, and they don’t matter in life.  It’s who you are deep inside, and it’s what you do with who you are deep down inside, that matters, and it doesn’t matter what you look like, how you talk, how you act, how much money you have, or, even, how much athletic talent or other talent you may have.  What matters in life is the journey, the destination, the trying, the determination—the courage to try to succeed at something in life.  It doesn’t matter whether you win or lose; what matters is that you have fun, that you try, and that you maintain the ability to love yourself, your family, what you are doing and what you believe in with life.  These are the main messages of “Eddie the Eagle,” and these messages, morals and lessons are more reasons to cheer this film.

So, go see “Eddie the Eagle,” enjoy this great film, remember its important lessons in life, and, at the end, stand up and cheer.  You’ll be glad that you did.  It’s okay to cheer good-hearted films like “Eddie the Eagle.”  And that’s not a cliché.