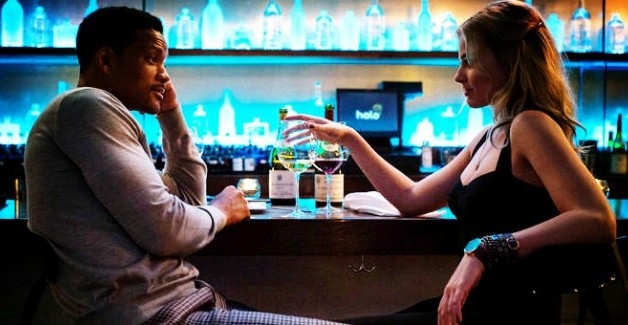 We haven’t seen Will Smith in a movie like Focus for a while. His last starring role in 2013 was After Earth, where he played a General of the future spending most of his screen time slowly dying in his chair. Focus brings back some of his ‘freshness’, humor and classic charm that we know from the Men in Black movies. In Focus, Smith is Nicky, a slick con artist leading a team of grifters who steal from people at football games, casinos, fancy restaurants and racetracks. With the millions they steal, they try to make even bigger scores by bankrolling higher stake cons.

In the first scene, Nicky meets Jess (Margot Robbie), a very attractive grifter trying to rob him at a luxurious restaurant in New York. Nicky immediately sees through it, but plays along and after revealing himself as a con man, decides to teach her some of his tricks. The talented Robbie, best known for her role in The Wolf of Wall Street, wants to learn from ‘the greatest’ and works her way up to his team. Suffice it to say that the two of them will develop a hot romance.

The film can be divided in two parts: The first (and best) half, where Nicky and his team plan and carry out their cons, and the second that follows after the ‘three years later’ card. That’s when Nicky and Jess meet again. This time she reappears at a racing-event in Buenos Aires, on the arm of racing mogul Rafael Garriga who Nicky is planning a con job for. Despite some entertaining action scenes, this last half of the movie doesn’t live up to the first.

Focus reminds us why Will Smith became such a big movie star in the first place. Smith plays his role with relaxed confidence and he and Robbie have excellent chemistry. The public robbery scenes are very entertaining, but unrealistic (are all the victims drunk or stupid?). When the action slows down, the sharp and witty dialogue  keep the movie going. But really the best thing is that Focus is so unpredictable. You will spend most of the time trying to figure out who is playing who and when. Even if you try to focus really hard you will get distracted. That makes distraction one of Focus biggest assets.