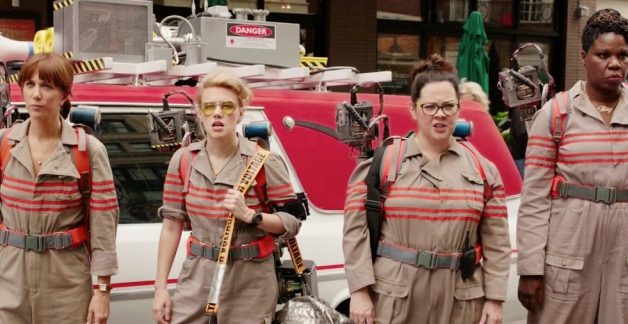 “Ghostbusters”—the 2016 version directed and co-written by Paul Feig and starring an energized Melissa McCarthy, Kristen Wiig, Kate McKinnon and Leslie Jones operating at the top of their comedic games—is thankfully and happily a continually fun, funny and entertaining—and visually stunning–midsummer popcorn entertainment time at the movies, and the film also happily adheres to, and respects, the knowingly goofball, flat-out endearingly goofy aura and the old-fashioned ghost-hunter supernatural-themed paranormal investigation aspects of the original 1984 film.

Yes, baby boomers crouching in the corner in a fetal position hugging your “Ghostbusters” soundtrack cassette tapes and black-and-white-and-red ghost-logo T-shirts, it’s been thirty-two years, lawdy mamma, since “Ghostbusters” was released. At the time, the film became another instant hit for a group of actors, directors and screenwriters who themselves were all working at the top of their games and creating a string of hits amid a very hot success streak—“Ghostbusters” co-writers Dan Aykroyd and Harold Ramis; producer and director Ivan Reitman; and stars Aykroyd, Ramis, Bill Murray, Rick Moranis, Sigourney Weaver, Ernie Hudson and Annie Potts. (There was a sequel five years later, in 1989, but, well, let’s focus on the original film and the 2016 reboot. The less said about the sequel, the better.)

The reboot is one of the very rare reboots that somehow manages to be a good film on its own, while also, as noted, maintaining the feel, atmosphere and spirit of the original; being funny and entertaining on its own in a unique way; building on the success of the first film’s influences and themes and inspirations and holding firm to those original influences, themes and inspirations; taking the legacy of the original film seriously, and not veering or roaming far away from that original film; and, most notably, taking great advantage of the myriad advances in film, computer-generated imagery, visual effects, special effects, computer effects, green-screen effects, animation effects and who knows what other advances in film technology that has occurred during the last thirty-two years. In other words, the 2016 version of “Ghostbusters” is visually stunning—these filmic ghosts, ghouls, poltergeists, spirits and generally scary creatures are drawn, colored, crafted and presented in bright, clear colors, floating, flying, spinning and rushing the screen in vibrant visuals. Huge, meandering creatures fill the screen and are alternately funny, scary, visually thrilling and state-of-the-art. So in addition to a bright, witty script, funny direction from Feig and the stand-out comedy from the four leads and an equally stand-out supporting cast, “Ghostbusters” makes sure to include dazzling, dizzying special effects that smartly complements the rest of the film.

The 2016 version is not a direct sequel, is not one of those horrid “re-imaginings” that rudely turns everything upsidedown and inside out with that respect for the original, and is not one of those weird reboots that just uses the original name—and not much else. The film stands on its own, with its own new characters, story, backstory and plot.

McCarthy, Wiig and McKinnon—all inhabiting their respective characters with distinctive quirks, tics, personality traits that make each character individual and unique—and funny, of course—play modern-day paranormal, or supernatural, investigators with a lifelong interest in researching, studying, chasing and analyzing ghosts and the paranormal—from an academic, scientific standpoint. That’s the same smart move that Aykroyd and Ramis took with their characters in the original—the characters—in both films–are not scam artists, crazies, delusional, crying wolf, terribly weird or chasing rainbows, but rather serious, dedicated, studious academics who approach ghost-hunting, the paranormal and the supernatural from an intelligent, studied, academic approach. McCarthy’s character in the reboot, Abby Yates, in fact, has a doctorate, works for a scientific institute, and believes strongly in her work. She is smart, confident, bold and individualistic—and she stands up to idiots and morons who question her work. Her estranged colleague, Wiig’s uptight, insular and emotionally-repressed academic equal, Erin Gilbert, is working as nothing less than a physics professor at Columbia University. Yates’ partner in research at their institute, McKinnon’s endearingly cute and lovable—yet wholly steampunk eccentric, wacky and somewhat out-of-it—Jillian Holtzman is the requisite technology, gizmo, gadget, inventor and Ms. Fix It of the group—equally brilliant, but in a mad-scientist sort of way. Holtzman is a combination of Greg Morris’ character in “Mission: Impossible,” the quirky technology whiz in the “National Treasure” films and the technology whiz on television’s “Leverage.” And Leslie Jones’ hilarious Patty Tolan is far more than her subway station attendant and fellow ghost-hunter—she’s a history buff with a rich, deep and interesting knowledge of New York City history, who comes to help Yates, Gilbert and Holtzman by adding local knowledge to the deep academic institutional knowledge.

Together, the actresses form a comedic chemistry that works well on screen, and, in the best comedy tradition, they constantly trade barbs, insults, set-ups, spats, funny lines, jokes, looks and ridiculously goofball science-fiction mumbo-jumbo discussions about ghosts, the paranormal and the supernatural so goofball sci-fi that Feig and co-writer Katie Dippold must have had a great time writing those specific lines in the writing rooms. As did Aykroyd and Ramis thirty-two years ago, when they drew their influences from old-fashioned ghost-chasing films and modern-day studies of the paranormal.

In the new version, Yates, Gilbert, Holtzman and Tolan are brought together after a series of ghastly, scary—and mysterious–ghost sightings and run-ins in New York City prompts major concern at all levels—including the mayor’s office and the U.S. Department of Homeland Security—and the ghostbusters realize that their years of un-rewarded, un-respected and dismissed paranormal research may, in fact, have some real-life merit. They form a formal paranormal research, investigative and capture team, rent the top of a Chinese restaurant for office space, hire one of the dumbest—but most handsome—receptionists since Carol Burnett’s Mrs. Wiggins, played funnily by a self-deprecating Chris Hemsworth, and get to work chasing ghosts. Meanwhile, something, or someone, could be plotting to unleash nothing less than the apocalypse on earth by creating a complex vortex to hell that will prompt the invasion of millions of angry ghosts and spirits on the planet, causing death, destruction and terror worldwide! The ghostbusters, of course with little money, a few homemade resources, limited technology, and no support from the government, must fight the demons, restore order and prove themselves—and their work—to the world.

Of course, it’s all goofy fun, and the film plays the outrageous supernatural elements for laughs—but just enough laughs, still keeping the spirit of the characters strong and dedicated enough so the audience likes them, supports them and actually cares about them. As is nearly always the case with entertainment-medium scientists trying to prove something that no one believes in—well, there’s a bit of crying wolf in that—and as in the case with the first film, government suits are constantly working against them, either not believing them, or working against them. In the first film, the mayor and even the pope support the ghostbusters, but other government suits still try to shut them down. In the second film, the government conflict is heightened, as Andy Garcia’s funny, image-conscious but generally dumb mayor and Cecily Strong’s razor-sharp, cut-throat and mean-spirited mayor’s aide, along with Matt Walsh’s understated DHS official, simply try to neutralize the ghostbusters, shut them down and alienate them. That, of course, just makes the ghostbusters stronger, as they know they’re the only ones who can win the supernatural battle, stop whomever’s creating this vortex, shut it down, get the ghosts back to where they belong—wherever that is—and restore the public’s faith in the ghostbusters.

McCarthy’s smart, academic and strong-willed Yates, meanwhile, anchors the film. McCarthy plays Yates unlike any other role that she has played, plays the part strongly, and, in the end, this comedic role in the “Ghostbusters” reboot ends up being McCarthy’s best overall film performance—really. The character doesn’t rely purely on sight gags, crudeness, or lame jokes, but is an actual, lively, strong-willed and intelligent scientist. She’s only trying to prove to the world what she already knows, along with Gilbert, Holtzman and Tolan, of course.

Wiig plays Gilbert as a somewhat nerdy—but quite cute (that’s not sexist, it’s just true—Wiig is cute) scientist unsure of herself and struggling to fix a long-ago fractured professional and personal relationship with Yates. That aspect of the story adds another layer to their character and plot development. McKinnon is simply unique, inventive and original with her completely modern steampunk, tech-geek, science-nerd, eccentric builder and inventor—and she, too, radiates cuteness (that’s not sexist, either—McKinnon is cute). And while McCarthy’s Yates is the anchor, Jones’ Tolan is often the scene-stealer—in many scenes. Jones is just flat-out funny—a female Tracy Morgan, able to command a scene with one line, one facial expression and one posture. She steals several scenes in “Ghostbusters”—and that’s saying something, considering she’s acting alongside McCarthy, Wiig and McKinnon, all talented comedic actresses. And Hemsworth is hilarious as some type of bumbling, stumbling cheesecake beefcake receptionist who was not blessed with the correct number of brain cells.

The ghostbusters research the ghostly appearances in New York City, work against the government suits, come together as a team, patch up their past differences (that’s not really a spoiler—come on!) and save the day from the ghost apocalypse (that’s not a spoiler, either—viewers know that this movie is not going to end up like an episode of “The Walking Dead”), all the while tossing off jokes, gags, one-liners, sight-gags and slapstick, generating laughs.

“Ghostbusters” is also full of some nice surprises and treats along the way, and those will not be spoiled. Moviegoers should stay in their seats through the end credits—all the way to the end, where there is a very nice, touching, emotional—and wholly proper and deserved—dedication: “For Harold Ramis.” Ramis, sadly, of course, died on Feb. 24, 2014, at the age of 69.

In the end, this 2016 “Ghostbusters” is a fun, funny, entertaining and visually stunning enjoyable midsummer way to spend a few hours at the movies.

Sometimes, you can go home again, and the 2016 version of “Ghostbusters” feels like home. Who ya’ gonna call for the movies this mid-July, midsummer weekend? “Ghostbusters!”