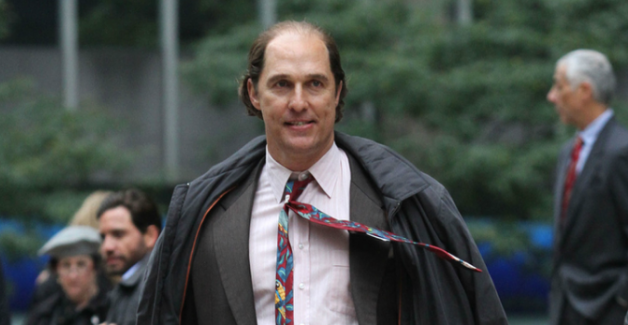 “Gold” is recommended, as the film is an entertaining look an everyman businessman prospector who vows to carry on his family business until he and the company succeeds—at all costs.

Matthew McConaughey shines in a stand-out performance in the lead role as Kenny Wells, turning in an acting performance that is so natural, unassuming and down-to-earth, McConaughey fools you completely with his sneaky, naturalistic performance–he’s acting at a high level, but Wells is such a bumbling, often-unlikeable and irritating pain, McConaughey makes you like Wells, despite your best intentions to completely dislike him. McConaughey makes Wells an Everyman that everyone relates and somehow comes to understand–he’s simply trying to succeed and carry on his father’s once-prosperous prospecting business.

The film is based on the tragic real-life Bre-X mining scandal.

McConaughey is well-suppored by an ensemble cast that also bolsters the film–Bryce Dallas Howard in one of her best roles; Edgar Ramirez in an understated role as Wells’ business partner, Michael Acosta; and Joshua Harto, Timothy Simons, Toby Kebbell (on a hot streak after his good performance in “A Monster Calls”), Corey Stoll, Bruce Greenwood, Stacy Keach and Craig C. Nelson, among others.

Much like 2015’s equally-excellent “The Big Short,” “Gold” offers an inside, backstage, backroom, conference room visit into the often-shady, often-corrupt and often-negatively-manipulative wheelings and dealings of Wall Street, national and international business and finance–while keeping things funny, dramatic, interesting–and informative, as both films are based on true stories.

Also much like “The Big Short,” “Gold” in the end offers up a lifetime’s worth of valuable, insightful, important–and cautionary–lessons, morals and messages about the down side and disadvantages of greed, money-grabbing, morality, dedication, big corporations, big business, Wall Street, office politics–and corruption, deception, dedication and, in the end, plain old honesty.

McConaughey and his supporting ensemble cast and Gaghan’s excellent direction deserve to be seen in “Gold,” and the film is well worth the time for its various morals and messages.