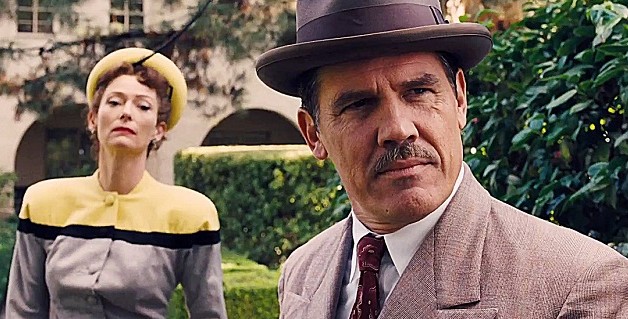 “Hail, Caesar!,” written, directed, edited and co-produced by brothers Joel and Ethan Coen, is a most welcome breezy, fun, entertaining, funny and—notably—positive and upbeat comedy and Hollywood love letter, homage and valentine that could not be more welcome in a cold wintry season filled with horrendous snowstorms and equally horrendous political campaign storms, both of which have shut down large portions of the country in their own ways.

“Hail, Caesar!,” then, should prove to be a wonderfully diverting time at the movies during the weekend of Feb. 5-7. The film is so entertaining, people should indeed get away from their still-impeded snow mounds and political shout-fests, go out to the theaters, sit back–and lose themselves in this light-hearted, but still weighty in theme and message, story about a quite hectic day in the life of a stereotypical, romanticized movie industry studio.

The film, which follows an old-fashioned movie studio fixer, or, basically, a management, production and administrative manager and problem-solver working at a studio’s front office in close quarters with the studio’s top officials to keep management operations running smoothly, is many things in many ways, and the disparate story, plot, tone, message and filmmaking factions all actually, cleverly end up working together smoothly, a rare achievement that lesser filmmakers often try but fail to pull off in a successful manner. The film is part traditional comedy; part homage to 1950s and pre-1950s moviemaking and movie studio systems; part reflection on and comment on the movie industry in general, no matter what the period; part reflection and comment on movie actors, directors, producers and others who work on films; part period film focusing on various bizarro and, looking back, improbable and moronic aspects of 1950s government and politics, domestic home life, culture, entertainment, philosophy and sociology; part reflection on and comment on religion and its inherent hypocrisy, problems and unexplainable contradictions; and a hilarious comment on the equally inherent ridiculousness, stupidity and idiocy of the so-called Cold War, especially the communist scares and paranoia, flirtations with communism with some people on an experimental level, and underground-yet-above-board political, spying and defense battles against communism.

Again, tying all these various types of varying themes, messages, tones, plot points and period aspects together in a successful manner is usually a recipe for filmmaking, plot and story disaster for many lesser filmmakers, but Joel and Ethan Coen, now 61 and 58, respectively, are smart, talented, savvy, creative and experienced enough at this stage of the filmmaking game to know how to put movie plot puzzle pieces together so the final result is indeed a cohesive, binding, tightly-would successful story, entertainment and film. This is what the Coens have successfully accomplished many times throughout their career—taking seemingly far-flung, differing plots, characters, tones, themes and messages, mixing them all up, and then tying everything up together in films that challenge, provoke, cause discussion—but somehow work in the end. Of all their films, “Hail, Caesar!” most closely resembles and recalls what could possibly be the Coen’s best film, 2000’s equally hilarious, inventive and disparate “O Brother, Where Art Thou?”

Like that funny and, somehow, upbeat film, “Hail, Caesar!” is a period piece that reflects on the strangeness, oddities and quirks of a particular era; reflects on religion, popular culture, government and politics and sociology of a particular time; and still offers a heartfelt, bittersweet valentine to that particular era. In both films, the Coens are wise enough to offer equal parts romanticizing and equal parts harsh criticism of the films’ respective eras, noting the good, the bad and the ugly of the rural 1930s of the Deep South in “O Brother…” and a shiny, glossy, more industrialized urban 1950s Los Angeles in “Hail, Caesar!” Both eras, both settings, and the attendant strangeness of both periods and places, are ripe for satire, parody, political comment, religious comment and sociological comment—and again, the Coens succeed on all of these examination levels in “Hail!,” as they did in “O Brother…”

At the same time, it must be noted, “Hail” stands firmly on its own as its own unique film, and even though it’s quite similar in style, tone, presentation and themes as “O Brother…” “Hail” does manage to succeed on its own, in its own similar, goofy, funny way.

“Hail” follows a crazed day in the life of Eddie Mannix (a superb, extremely focused and tightly controlled, strongly performing Josh Brolin, who, even at 48, seems to be getting better year by year), the aforementioned fixer at the fictional 1950s-era Capitol Pictures, very obviously modeled after MGM and, at times, other similar old-fashioned movie studio operations. Mannix, a straight-arrow, likeable (that Mannix is likeable is one key aspect of the film’s success, as he has to be likeable because he is the center of the film and is in nearly every scene) family-man manager-type, somehow has found himself in an oddball movie studio administrative position in which he has to deal with a kidnapped leading actor who has the lead role in Capitol’s “Hail Caesar,” a big-budget, prestigious, religious costume epic; shady, mysterious kidnappers who are holding that actor for a $100,000 ransom; a pretty-boy Western rodeo star who can’t act in a straight drama that the studio wants him to star in; snooty, self-centered diva directors; a pregnant, unmarried leading lady whose predicament could be a devastating tabloid scandal; an underground rumor about a certain leading actor that could be another devastating tabloid scandal; irritating, nosey twin Hollywood gossip columnists; and crashing, colliding production, budget and scheduling problems with concurrent film productions on the Capitol lot.

That premise, simply presented on paper, is promising and raises hopes for an entertaining romp through period Hollywood and all of its bizarreness, and that is exactly what the Coens deliver. And they deliver in a high-level fashion, with expert casting that includes a varied all-star cast, all of whom deliver in memorable ways, even in some stand-out, hilarious supporting roles; a script, story and dialogue that are layered, complex but not too complex, full of deeper meanings and messages, as previously noted, and full of great, funny and perceptive lines delivered in either straight-out comedic, deadpan or even serious passages, depending on the scene; direction that knows how to juggle, manage and control varying characters, stories, plots and subplots, and how to similarly juggle, manage and control some big actors playing off other big actors; and, in an unsung but wholly noticeable manner, superb, gleaming, glossy and just-plain beautiful and dazzling production design that shines and impresses throughout the film.

The films-within-a-film scenes include two amazing stand-out production numbers, presented with full-on production values that equal the values of the types of films they are emanating—a dazzling Esther Williams-style synchronized swimming production number complete with creative designs in the water made by swimmers that are filmed from above, just like they used to do in Williams’ successful films; and an equally dazzling song-and-dance production number with sailors in a bar who are lustfully, but still G-ratedly, singing about meeting “dames” before they ship off to sea—a number filled with wonderful, old-fashioned singing, dancing and tap dancing. The memorable, entertaining production numbers may appear to not connect directly to the plot machinations at hand, but, in a way, they do, because they illustrate just what a film studio does every day, and they show why the attendant problems that Mannix has to fix matter in relation to the actual business aspects of show business: Movie studios, as Mannix perceptively notes at one point, are in the business of creating fantasy, wonder, escape and entertainment, and if too much outside reality—kidnappings, pregnancies, unmarried mothers (a problem at that time, not so much today, of course), ransoms, rumors, scandals—impedes on that fantasy, it’s bad for business. Thus, we get two lavish movie production numbers in “Hail” to illustrate just what it is that movies are trying to produce to please their audiences—and to protect as their core assets.

“Hail” succeeds due to a series of finely-crafted, smartly-controlled individual performances that are part of the film’s puzzle pieces, and this, too, is another hallmark of Coen films—the ability to draft numerous quality performers who are willing to forego their usual hefty salaries, egos and demands, and simply show up for what they know is going to be a smart, inventive, fulfilling and fun acting experience. Thus, “Hail” boasts Brolin; George Clooney as the kidnapped Clark Gable-like dashing leading man actor Baird Whitlock (even the obviously studio-crafted matinee name matches the character), who is equal parts actor, goofball, lovably clueless pretty boy, and valuable studio asset; Alden Ehrenreich as an equally-clueless, equally-pretty-boy and equally-valuable studio asset Western hokie actor Hobie Doyle, who can ride a horse and handle a rope but is lost in a suit-and-tie talky drama; Ralph Fiennes, superb as any stereotypical, old-fashioned, suit-wearing, strict, by-the-books studio film director, in this case a stuffy director named Laurence Laurentz, who is so self-centered and delusional, he keeps pronouncing his last name in different ways; Swinton, again, hilarious as the aforementioned gossip columnists; and Scarlett Johansson as equally annoying and equally ravishing synchronized swimming movie star DeeAnna Moran. Additionally, scores of talented actors score major points in key supporting roles, including a hilarious bunch of deluded Communist screenwriters who sit and argue philosophy, economics, government, politics and the dangers of big business, while at the same time kidnapping a movie star to get back money that they claim is due them for their under-appreciated work at the studios.

The Coens are experts at finding oddball, goofy, quirky characters that populate—and embellish—their films, and they greatly succeed at this in “Hail.” Think of the wide-ranging supporting actors in “O Brother..,” “Fargo” and other Coen films, and similar types are there in “Hail.” The scenes in which the initially clueless Whitlock listens to the delusional Communist screenwriters argue about political and economic issues is classic. And the interactions between the befuddled, stuffy movie director Laurentz and the clueless redneck sweetheart-of-the-rodeo Doyle on the set of the equally-stuffy drama is also classic.

Through all this ridiculousness and lovable craziness, Mannix must somehow deliver a kidnapping ransom; get his leading man Whitlock back to the set to finish his Biblical costume epic before the budget goes overboard; keep his leading lady’s domestic problems out of the tabloids; keep the gossip columnists at bay and keep the studio problems out of their columns; deal with Laurentz and Doyle; and—to remind filmgoers that Mannix is a real person and the world does not only revolve around movies, fantasy and entertainment—Mannix must also deal with his own, inner, personal domestic, family, religious and job struggles.

Amid the movie business insanity, there is also a touching, somewhat real portrait of a real, actual everyday Everyman—Mannix—who must deal with his own internal problems in life, the reality that keeps bumping up against the film industry’s carefully-crafted illusions and delusions of fantasy, wonder, pretend and make-believe. And it is in these quiet moments that the film does succeed in making some very real points about real life, and the intersection of real life and make believe.

One of the many messages of the Coens’ “Hail, Caesar!” is that life can be like the premise presented in the film—life can be, at times, an exhilarating, exasperating, exhausting collage, mixture and collision of the mundane and the glorious, the simple and the complex, the fun and the boring, and, when things tend to go either very wrong or very right, a thrilling mixture of everyday real life and thrilling make-believe, pretend, wonder and fantasy. All one can do, then, is keep getting up, going to work, and praying that in the end, everyone will live happily ever after, and, when the life credits roll, there will be a happy ending.