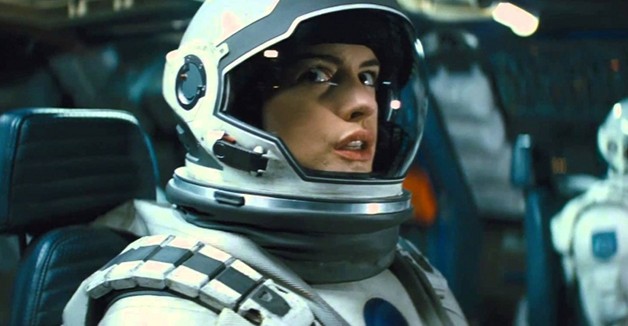 If ever a film can be accurately labeled over-achieving, “Interstellar” hits the mark. Sadly and embarrassingly summoning the equally self-centered, muddled and confusing—and disappointing–“Cloud Atlas,” the equally good-intentioned “Contact”—which coincidentally also starred Matthew McConaughey—the good-intentioned “A.I.,” as well as some recent-year overly-produced and over-budgeted science fiction disasters that all flopped big-time, “Interstellar” falters mainly because of several major factors that could have been easily fixed. First, the film is completely lacking in coherent, interesting and compelling story, storyline, characters, characterizations and narrative. The film is also overly grim, dark, depressing, rambling, boring even, and so engulfed and enveloped by blurry, fuzzy science and science fiction gobbledegook and thingamajigs and bamboozlers and hogwash and geektalk, you can feel the mass sedation in the theater from the collective sets of eyes steadily glazing over as the film stumbles and falters through its absolutely over-long and mind-numbing—but not in a good way—third act.

It doesn’t matter if some of these science and science fiction overzealous fans are raving about the film—it’s still an overall mess and disappointment, and I can’t honestly recommend that anyone rush out and see it. And I don’t care how much money they spent on computer effects, visual effects and special effects—that doesn’t always make a movie, and it certainly doesn’t make the movie this time.

Either save your money—or go out and see “Guardians of the Galaxy”—a far better film—again.

The reason “Interstellar” fails in regards to its story, characters and narrative is, first of all, the confusing, hazey and meandering method of writing and directing that does indeed often mar Nolan’s work. “Inception” and certain parts of Nolan’s “Batman” trilogy suffered from this over-achieving, over-writing, over-direction and over-production—to the point where many viewers literally had no clue what was going on. That’s not good. To this day, people scratch their heads and clear their eyes—and likely pound their fists in anger—trying to figure out just what the holy heck was going on in “Inception” and, again, parts of the Batman films. In all of these films, there are stretches that seem like they could have easily been simply cut and discarded to make a better film.

Directors don’t always have to film every idea and throw every story idea into a film—something Nolan needs to learn, even now, even today. Since he often acts as producer, director and writer, there appears to be a lack of anyone above him telling him when and where to cut and edit, when and where to leave certain scenes and stretches and even sub-plots out of the films, and how to make the writing, the dialogue, the story and even the direction more understandable, more clear and easier to follow. It’s not that people are dumb or can’t understand the films, it’s that Nolan’s style appears to be intentionally confusing, hazey, unclear and distracting—it’s game-playing with films, and the last thing a filmgoer wants to do is play a game with the filmmaker while trying to be entertained. Movies—any storytelling any medium, actually—demand clear, concise, understandable and easy-to-follow stories, characters and plots, and this often just isn’t the case with Nolan’s films.

One problem is that Nolan and his writing partner, his brother Jonathan Nolan, do have some lofty, high-brow, intellectual ideas, and they are trying to address nothing less than some of the great questions in life and death. That’s commendable, of course, but, yet again, even if you’re trying to address and answer the great question of life, existence, the universe and everything—you have to be clear. Clear, understandable communication, after all, is the essence of great storytelling and art—and you can still achieve your lofty, high-brow goals of intellectual exploration of ideas and themes and messages and great questions while still being clear and understandable. Achieving this balance and intersection of intellectualism, intelligence and accessibility—while still entertaining people—is indeed an often-difficult goal, but it is also often an easily-achieved goal. The trick is to not let your intellectual, galactic and interstellar soul-searching overcome the need to communicate and entertain.

Alas, “Interstellar” fails to achieve this balance. The film attempts nothing less than an over-reaching exploration of basic existence, the future of earth and earthlings, interplanetary travel, the essence and make-up of the galaxies and the universe, alien life forms, wormholes, time, time travel, space, physics, rockets, planes, robots, aging, love, life, death and the afterlife. Is that enough? It’s too much. That list of themes, of course, is far too long and far too much for one film—even for “Interstellar,” which clocks in at a too-long 169 minutes and a bloated $165 million budget. The film just simply attempts to tackle too much, and thus misses most of its targets, as the goal to fully answer most questions gets horribly lost in the heavens.

Matthew McConaughey, fresh off his goofy, embarrassing Lincoln car ads and his deserved Academy Award for Best Actor for “Dallas Buyers Club”—perhaps his finest performance in his up-and-down career—plays Cooper, a widowed, contented farmer, engineer and pilot in a weary, blighted, desecrated, post-apocalyptic future whose sedate country life of productive, pleasant agriculture and family is upended by apparent spooky, otherworldly signals from outer space, mysterious codes, and an itch to save the world for his children. Through a series of unexplained phenomena—which already test the viewer’s patience in the first act by, again, not being presented in the clearest manner—Cooper is enlisted by a secretive batch of irritating, annoying NASA scientists—none of whom are presented in a likeable manner, another of the film’s faults—to pilot a ship through a discovered wormhole to find habitable planets to save the human race.

The film tries so hard to explain how the human race could be saved by discovering new planets, and the film tries so hard to explain how these explorations to other planets could be accomplished, and the film tries so hard to explain the science, the physics, the engineering, the methodology, theories, theorems and plans to accomplish all this. But, again, not because of any intelligence or understanding difficulties among viewers, it’s all presented in such stodgy, lifeless, lecturing, plodding, ponderous and boring dialogue and scenes, the viewer sometimes feels as if they’re sitting in a high school or college science class being taught by a monotone-plagued, unhappy professor whose already tired of teaching. There is no spark, no life, no excitement. Some may argue that, yes, there are indeed crashes, close calls, fights, perilous explosions, disasters and missteps—yes, they are all there—but, somehow, none of it comes across at a level of excitement that draws the viewer into the story and into the characters.

Besides the muddled dialogue and presentation, the characters and characterizations are another problem—a major problem. Only one of a parade of troubled characters—one, mind you—are likeable, sympathetic and relatable. That would be Murph, Cooper’s 10-year-old daughter, wonderfully, beautifully and masterfully portrayed by young actress Mackenzie Foy, who in “Interstellar” is as emotional, moving, gripping as she is beautiful and cute. Murphy does not want her father to leave—on a mission that could take two years, or could take forever. That’s entirely understandable, and that makes for some gripping conflict during the first act of the film.

Foy, who is now 13, slyly and easily steals the entire film out from under McConaughey, Anne Hathaway as a fellow scientist and explorer, Michael Caine as an Einstein/Sagan/Hawking/Gates type of brilliant scientist, and John Lithgow as a horribly, strangely grim and unlikeable father to Cooper and grandfather to Murph. Foy is the only actor in this film who rises above the muck—and—boom, like a ship exploding in space—the film unwisely shifts abruptly and suddenly away from the young Murph, and just as suddenly loses its best character and its most likeable character. And it’s all downhill from there.

Again, oddly, Cooper, Hathaway’s Amelia Brand, Caine’s Professor Brand who is also Amelia’s father, Lithgow’s grandfather Donald, Casey Affleck’s mumbling, somewhat-psycho son Tom and even Jessica Chastain’s older Murph, who becomes a brilliant scientist like her father, are all unlikeable, off-putting and difficult to watch. Anne Hathaway is beautiful to look at, it must be noted, and she is acting well here, but her character is so stubborn, prickly and combative, it’s difficult to connect and sympathize with her. The same with Caine’s character and Lithgow’s characters. Yes, they are all living in a post-apocalyptic world that is steadily dying literally right in front of their eyes, but even in a steadily dying, post-apocalyptic world that could disintegrate at any moment, well, sometimes you just have to laugh and break a smile. But the laughs and smiles are few and far between in “Interstellar,” and the film becomes so grim and dark and dour, the viewer oddly would perhaps like to see this world end, if only to get to the next act or to the end of the film.

In the story, Cooper, Amelia Brand and two other astronauts take off to find other livable planets in the universe. They encounter risks, crashes, disasters, explosions, aliens, time warps, disruptions in the time-space continuum, unexpected finds, mysteries in the universe and other adventures. That sounds exciting and inviting, of course, but, alas again, it’s all too-often not exciting and not inviting, but just ponderous, cumbersome, lumbering, and everything tends to collapse under its own weight, or weightlessness, considering the outer-space circumstances.

Muddled storytelling, confusing narrative, boring dialogue, an over-reliance on scientific, science fiction and pseudo-science babbling, rambling, unlikeable characters and characterizations, and an overall dark, depressing mood and ambiance cannot be saved by $165 million and scene upon scene of fancy-schmancy computer, visual and special effects. Dazzling visuals, no matter how state-of-the-art , exploratory and groundbreaking themselves, simply cannot save a film from sub-par, desperately-lacking storytelling, dialogue, characters and narrative.

For Nolan’s next film, he needs to forego the visual, computer and special effects, forego the big budgets, take a step away from the producer’s chair, take a step away from the writer’s chair, focus solely on a good story and likeable characters—and just direct a steady, solid, likeable and enjoyable film that just doesn’t take life, the universe and everything so darned seriously.

Heck, even Einstein, Sagan, Hawking and Gates broke a smile and laughed every now and then. And even characters in a zillion other dark, post-apocalyptic tales took at least a few moments to smile, laugh, and take the time to enjoy life—even as the world was crumbling around them. Life, even as it’s ending, is for the living. Laugh, and even a post-apocalyptic world laughs with you. These are simple lessons that Nolan and “Interstellar” could have and should have heeded to make a better film.

At one moment in “Interstellar,” Caine’s character recites the lines from Dylan Thomas’ poem “Do not go gentle into that good night.” Even that scene is ruined by not showing Caine actually saying the lines, and by Hans Zimmer’s annoying score, which often oddly obscures dialogue throughout the movie. Caine, quoting Thomas, says to Cooper and Amelia Brand as they embark on their journey into the outer limits of space, “Rage, rage against the dying of the light.” The poem was written by Thomas about his father, who was dying and going blind. In “Interstellar,” Caine is reciting the poem, apparently, as a metaphor for the planet Earth and for the astronaut’s risky journey to the stars.

The lines could also be a subtle warning to Nolan and other filmmakers who let their broad, intellectual goals overshadow their projects: Rage against the dying of the creative, storytelling light, but do not go gentle into that good filmmaking night. Regroup, rewrite, re-edit and re-direct for the next project–and please remember the needs and wants and wishes—and rages—of the people who are sitting out there in the universe’s movie theaters.