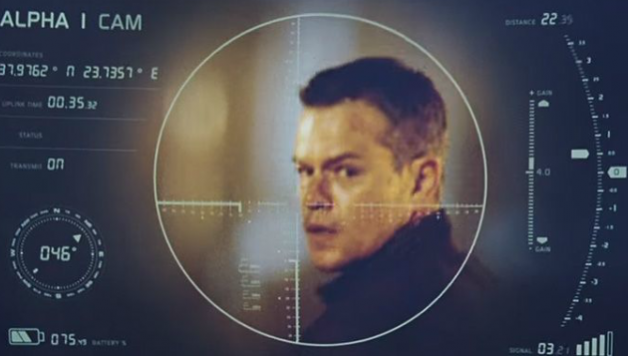 There is a basic, serious, fundamental problem with the “Bourne” spy film series, which has its unnecessary and wholly unsatisfying fifth entry, the overdone and horribly mind-numbingly unoriginal, stale, retread “Jason Bourne,” released today, Friday, July 29, 2016: the series should have stopped after the first film. All of the other films in this tired series just simply did not need to be made, and every one of them essentially, basically, told the same unoriginal cat-and-mouse, man-on-the-run, seek-and-chase story, with all of them melding together into one, long messy blur of a series.

That first film, “The Bourne Identity”—released in 2002, yes, a whopping fourteen years ago already—was an exciting, edgy, nerve-wracking, suspenseful, well-crafted, tense modern-day spy film, all full of twenty-first-century paranoia and conspiracy theories and corrupt, scheming, shady government and CIA types; high-technology; computer cyber hacking and tracking; somewhat-sci-fi-ish satellite technology but still trying to be presented as real (the capabilities suggested in all the Bourne films, even the first one, are way over the top, otherwise every wanted criminal on earth would be caught, arrested or killed within, oh, half an hour, as things regularly happen in the Bourne films); all sorts of fancy techno gizmos, and modern-day extreme-close-up, frenzied and even frenetic—but still workable—bare-handed fight scenes, action stunts, car chases, explosions and gunfights—all grounded in a somewhat more reality-based scenario, rather than the gleefully and openly sci-fi-oriented and intentionally over-the-top fantasy universe that the Bond series has successfully pulled off for literally half a century, including an excellent, exciting return to classic form with its last two films, “Skyfall” and “Spectre.” While the Bourne films obviously want to be a modern-day Bond series, that has never materialized—not even in the first film—and the series falters from being unoriginal and tired in each successive film in obvious ways—similar stories, similar characters, similar fights and stunts. While some may immediately think, “Well, isn’t that the case with the Bond films?” the immediate answer is “no,” as the Bond films do present their characters, stories, villains, locales, stunts, subplots and supporting characters in continually changing, self-aware, self-deprecating, inside-joke and, most importantly, completely fun, funny and entertaining ways and means—all of which is missing in the last four Bourne films.

Alas, while “The Bourne Identity” worked so well on so many levels and was a genuinely original, inventive, fun, exciting and watchable spy film, the Bourne series immediately faltered with its downer opening in the second film, its copycat storylines and scenes and characters in all of the following films, and, eventually, the series’ obvious over-arching copy-and-pasted, tired retread atmosphere during all of the ensuing films in the series: “”The Bourne Supremacy” (2004); “The Bourne Ultimatum” (2007); and the entirely strange, bizarre (in a bad way) and over-reaching “The Bourne Legacy” (2012), which didn’t even include the actual character of Jason Bourne or Matt Damon, the actor who plays Bourne—real name, David Webb—in all of the other films.

And “The Bourne Identity” ended so well, with the hero, Webb, safe, recovered, in a good place, happy, and re-connected with his beautiful new girlfriend, Marie Kreutz, a reluctant hero played so well by the likeable Franka Potente. There they were, together, happy, hugging each other, at a beautiful beach on the shore, victorious. And, again, that is exactly where this series should have ended—with the end of that first film. That was all that was needed.

With that blunt accessment, it’s obvious that the fifth film, “Jason Bourne,” cannot improve the series—and it does not improve the series–and, somehow, strangely, the film includes yet again an entirely downer, bummer plot development that blows up the film to the point that all that follows is nothing more than sitting dejected and dour and down in the theater, counting the minutes until the now-cliched end-credit sequence—with the essentially exact-same Moby song—rolls to the same graphics that the end credits rolled to in other previous films. When you can’t even change the end credits and credit-sequence closing song in five movies, something is wrong, very wrong.

“Jason Bourne” does indeed try to introduce a new storyline, it must be noted, but that story—which, because it’s a spy story that depends on diabolical spy-story twists, turns and surprises, will not be revealed or spoiled here—does not save the film, and that storyline isn’t even explored, followed or developed as deeply as it should be, and that story is thus buried—deeply buried—in, again, all of the now-cliched elements of the Bourne series—those close-up hand-to-hand fights, violent car chases, and frenetically-edited stunts and action sequences, which now are just tired copy-and-pasted retreads instead of something new, original and interesting. It has been fourteen years since the first film, after all. In “Jason Bourne,” the fights, chases and action are mind-numbing in a bad way, over-done, somewhat ridiculous, overly loud, overbearing and just plain pedestrian in terms of their inclusion as part of the overall story, film and characterization. Technically, athletically and artistically, the action, stunt, fight and chase sequences are done well—the very difficult and very skilled work of stuntmen, fight choreographers, stunt doubles, weapons experts, fight experts and professional stunt drivers is superb and excellent on every level. But, again, in terms of their placement in the context of the overall film, they simply don’t work on a filmic, story development and character development level.

This, thus, is the overall fault line with “Jason Bourne”—the disappointing story, story development, characters and character development. In the film, Bourne, or, really, David Webb, has been on the lam for ten years now. Out of nowhere, his former federal government spy colleague, Nicky Parsons (the still strong Julia Stiles, who is still under-utilized in Hollywood, for some strange reason) becomes aware of a new, secretive government spy program that could smoke out and possibly kill Webb. Parsons, who is off the grid, somehow, miraculously, unbelievably, on a planet with 7 billion people, finds Webb, who is also off the grid. Parsons believes that Webb is in danger (again!), and she also has some important new information about his background (again!), and once Parsons and Webb amazingly find each other on the planet, they find themselves immediately under surveillance (again!) by shady, corrupt and completely psychotic government spy officials (again!) who spend a literally insanely, idiotically and moronically amount of resources, technology, personnel, time, money and energy trying to track down and kill Parsons and Webb (again!). And the shady government spy psychos proceed to spend most of their waking hours simply trying to kill Parsons and Webb (again!). There is a second attempted subplot about the connection of the shady government psychos with a state-of-the-art computer technology company in Silicon Valley (an obvious attempt to capitalize on modern-day computer, internet, hacking, monitoring, surveillance and privacy high-technology issues regarding computer, cellphone, e-mail and website spy surveillance by government agencies), but it’s too obvious, too far-fetched, too-reaching, too-contrived, and, in the end, too little, too late for the film and the series. This issue will most likely more intelligently, academically and entertainingly explored in Oliver Stone’s upcoming “Snowden.”

And it’s not that the cast and crew working on “Jason Bourne” don’t do their specific jobs well technically or artistically. Damon, returning as Webb after sitting out “Legacy” in 2012 but starring in the first three films; Stiles; Tommy Lee Jones as this film’s token shady, corrupt government spy psycho; and the captivating, beautiful Alicia Vikander as the steely-eyed, steady and mysterious new spy agency character Heather Lee all turn in good, acceptable, watchable performances. Director, co-writer and co-producer Paul Greengrass ably directs, controlling the aforementioned difficult action and stunt sequences. And the production bounces all over the world, with strong establishing shots of various big cities and requisite exotic locales. It’s all there—but it’s all not there, due to the major problem, the story and character development. That area brings all of the hard work crashing down in the end.

And “Jason Bourne” oddly, ironically succumbs and fails due to the very aspects, approaches and ingredients that made “Identity” so entertaining fourteen years ago, simply because those elements—the frenzied action, pacing, editing and gritty, edgy presentation—are now no longer original or inventive, and that spy movie code was cracked, hacked and eventually whacked out during the last fourteen years. “Jason Bourne” simply ends up being flat, tired and a retread, alas.

What the spy world needs today is a more intelligent, in-depth, reality-based spy film that simply tells stories based on the myriad real-life spy stories that anyone can read in the daily newspaper, in real-life books about modern-day missions and policies, and in extensive investigative newspaper and magazine articles. The real world is full of actual, real, interesting—and filmic—spy stories, and this is the area where writers, directors, producers and actors need to mine—terrorism in general; radical, fringe terrorist cells, states, societies, gangs and armies, and the real-world wars against them; financial crimes and their association with terrorism; cyber crimes in general, from a modern-day perspective rooted more in reality (yes, this is approached in “Jason Bourne” and dozens of films, of course, but rarely effectively—one action film that really capitalized on this area in a sustained, enjoyable manner was the enjoyable “Live Free or Die Hard” from 2007); dictators and corrupt leaders and their association with terrorism; and how all of these issues come together on a geo-political, sociological, cultural, historical, religious and international level.

The “Bourne” films tend to often end with Webb walking defiantly away from his enemies, victorious, confident, on his own, off the grid, and walking toward what seems to be a more safe, secure and successful future. With “Jason Bourne,” the filmmakers need to let Webb continue that walk into the future, for good, and they need to finally let Webb walk into the proverbial sunset, secure in his place in the world, and, as a film character, secure in his place in film history. And then everyone associated with this series needs to move on to other, fresh, original and inventive characters, stories and movies. It’s time to let David Webb alone, to let him enjoy his retirement, and to let him stay anonymous and off the grid for good.