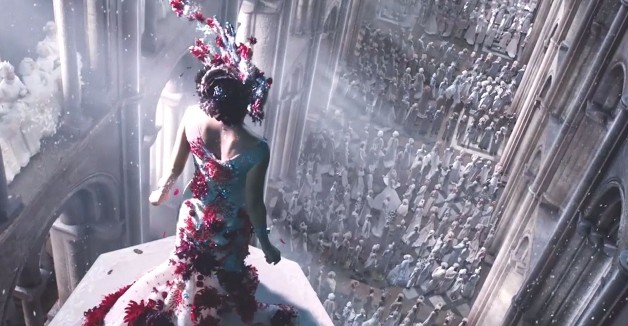 While “Jupiter Ascending” strives to be something greater than all the rest of these types of films that have cluttered screens for too many years now during the past fifteen years, the movie ends up being just another easily-forgotten piece of fluff that fails to rise above the norm in just about every filmic category.

And the film—yet again—is another reminder that big budgets; well-known producers and directors; A-list casts; fancy production designs, sets, values, costumes, props and make-up; and tens and tens of millions of dollars worth of visual and special effects do not make a great, or even a  good, film if you forget to include these basic filmic elements among the razzle-dazzle and flash of high-tech visuals.  Like for instance, some smart, insightful and sharp dialogue, decent pacing and editing, a story that makes sense to everyone, originality, cleverness, decent subplots that make sense, stories that don’t collapse under their various holes that fall apart not by nitpicking but by basic storytelling standards, and, yes, decent acting.  All of these basic filmic elements are horrendously, obviously—and strangely—lacking throughout “Jupiter Ascending.”

The basis story, plots, subplots and character developments do not make sense—even amid the wildest suspending of disbelief and even amid the craziest of science fiction imaginations that are required to enjoy or understand the film.  The dialogue in “Jupiter” is terrible—hokey, tacky, campy, schmaltzy, even embarrassing and eye-rolling at times.  There is no depth or intelligence—the film is strangely meandering and empty-headed.  The film strives to impart important messages, themes and morals about basic good versus evil, greed, courage, bravery, honor and valor—all impressive intentions, of course—but fails on every level to deliver these messages because the dialogue, pacing and structure are all so stodgy, plodding, ridiculously campy and, again, over-done and over-blown.  Any intentions of delivering important messages are lost amid the chases, shootings, fights, explosions and visual effects that drown out, over and over and over again, everything else.

“Jupiter Ascending,” written, directed and produced by Lana Wachowski and Andy Wachowski, represents yet another big-budget, effects-driven overall disappointment from the Wachowskis, who have to be, along with Michael Bay and other, similar fellow members of the big-budget, effects-driven Cult of Moviemaking Excess, some of the luckiest filmmakers on the planet—this planet, Earth, by the way.  This is true because for years now, the Wachowskis, much like Bay, have been torturing filmgoers with one big disappointment after another, and yet the Wachowskis somehow keep churning out the dreck. The list can start with the second and third “Matrix” films—both unneeded—and then melting into “V for Vendetta,” “Speed Racer” and then “Cloud Atlas”—all huge disappointments.  Why the Wachowskis keep getting green lights for continually terrible movies is a strange Hollywood mystery.

Additionally, “Ascending” completely wastes the talents of some quality actors and filmmakers.  Cinematographer John Toll, one of the best in the business (“Braveheart,” “Legends of the Fall”) has his talent lost in that daze and haze of visual effects, which really prevents any interesting, really creative uses of camera angles, lighting and composition.

And the film—mainly through bad directorial choices that were obviously thrown onto the actor—completely squanders the very real acting talents of some very A-list actors at the moment:  Mila Kunis, while stunningly beautiful and sexy, drowns amid layers of inconsistencies that the story throws onto her character.   Her character’s actions, reactions, decisions and developments in general, make little sense amid the over-arching stories, plots and subplots.  The same with the performance of Eddie Redmayne, who plays his evil-lord-type, Caesar/Howard Hughes/Darth Vader-type villain in such an over-the-top, laughable and campy style—again, probably the decision of the Wachowskis and not Redmayne—it’s simply an embarrassment.  Redmayne’s take on this character—a huge mistake overall–completely takes the viewer out of the story and out of the film every time his character appears.  And Channing Tatum gets absolutely nothing to do in this film except show his muscles, fly through the air, pilot some space ships, shoot some guns, grunt—and mumble dialogue unintelligibly, as if he’s impersonating some alien race hybrid of Vin Diesel and Sylvester Stallone.  And poor Sean Bean–his characters looks so confused in every scene, and seems so uncertain of what he’s doing, you can’t really blame Bean, because his character’s dialogue and actions, too, are similarly confusing, out-of-place, nonsensical and clunky.

The original story by the Wachowskis—who seemed to have taken bits and pieces of 500 previous science fiction and fantasy films, thrown them all into a raffle bin, turned the raffle bin a few times and then picked random plot devices and absentmindedly strung them together—centers on a beautiful girl on Earth, Jupiter Jones (yes, her father named her Jupiter, after the planet), who lives with her low-income family and gets up super-early every day and cleans houses with her family for a living.  The family is poor, but they love each other and are hard workers, and Jones simply dreams of earning enough money to just buy a telescope, so she can scan the stars like her late father.  Then, suddenly, one day, conveniently, all at once, several space bounty hunters, assassins, kidnappers and abductors descend upon Earth to either kill or capture Jones, who, it turns out, “Terminator”-like and like dozens of other heroines in dozens of other films, is some  rare genetic mutation being, and her distinction gives her special status, a special royal title—and grants her the lofty status to be the heir to the planet Earth.  She is also, by way of the rare genetic happening, thrust immediately into the middle of a family battle royal among three brothers—“King Lear”-like—who want to either kill her, take advantage of her or simply dispose of her so they can continue to have access to Earth for their villianly evil deeds and doings.

Tatum’s generally lunkheaded, but somewhat lovable, bounty hunter—a good guy who becomes Jones’ main ally—named Caine Wise, again, seems to alternate between saving Jones, abandoning Jones and then saving her again. The same with Bean, whose alien character living on Earth bounces back and forth between ally, bounty hunter and comrade in arms.  Various evil alien brothers, pirates, rogues and rebels all subsequently mush and melt together amid a confusing, multi-layered science-fiction plot that expands the backstory of Jones, Earth, the universe, alien abductions and interstellar gothic space drama and tragedy.

Yet despite everyone’s best intentions, all of the visual and special effects and gaudy production design, clichéd storylines and overly-confusing plot points drown out what could have been a better picture if it all had just been scaled down.  It’s interesting—a serious deficiency in many films—too many films—is a drastic lack in strong sub-plots and backstory, deficiencies that often can be modified by adding some simple plot elements and scenes to a script.  Yet in “Ascending,” there are too many plots, subplots, backstories, characters, stories and developments.  Some simple editing in the writing room and the editing room could easily have cut out many of the stories’ confusing, overlapping elements and resulted in a more simple, streamlined—and enjoyable—story and film, possibly.

And, again, the film just needed better writers.   The dialogue is so hokey, campy and schlocky, the viewer just zones out and thinks of other, better films that accomplished what “Ascending” failed to accomplish.  For starters. 2013’s “Gravity,” the first three “Terminator” films, 2014’s excellent and thoroughly fun  “Guardians of the Galaxy,”  and a hundred or so other science fiction and fantasy films that obviously influenced “Ascending.”

As for the Wachowskis, and so many other filmmakers who continually dump these excessive, over-budgeted, visually excessive films on a continually irritated and uninterested moviegoing public (See:  constantly declining domestic and international box office sales and more and more big-budget, Cult of Excess flops), their real next movie should be to head out to the theaters right now and watch, observe and take notes on the quality films that are indeed original, smart, intriguing, insightful, perceptive, thoughtful and entertaining, such as “Birdman,” “Boyhood,” “Cake,” “Still Alice,” “The Theory of Everything,” “The Imitation Game,” “Selma,” “The Grand Budapest Hotel,” “Foxcatcher,” “American Sniper,” “Whiplash,” “Spare Parts” and “Unbroken,” among others.  The Cult of Excess filmmakers’ second move should be to simply make smaller-scale, well-crafted, character-driven, intelligent movies such as these films.

And their third move should be to apologize for films like “Jupiter Ascending.”