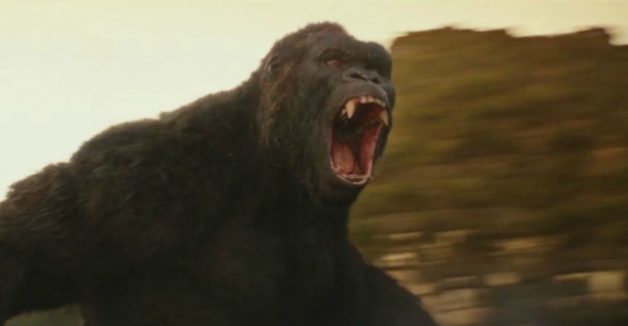 Based on “King Kong” by Merian C. Cooper and Edgar Wallace

The over-done, overwrought, over-everything “Kong: Skull Island” provides an easy, quick answer to the valid question, “Do we really need any more King Kong movies or any more monsters-chasing-people-through-woods movies?”  The answer is a defiant no, not right now, thank you.

“Kong: Skull Island,” opens today, Friday, March 10, 2017, and this is indeed one island you do not want to visit in the movie theaters this weekend, or any weekend.  Listless, unoriginal, clichéd, one-dimensional, one-directional, hackneyed and completely lacking in depth, this collection of state-of-the-art visual effects is just that—a long, endless collection of state-of-the-art visual effects.  Masquerading as a movie.

This is not spoiling anything, but one of the early, opening scenes in this mess is an early, easy indication of just how awfully scripted, directed, edited and paced this film is:  A group of out-of-control, seemingly-crazed archeologists, government explorers, treasure hunters, trackers, scientists and soldiers—all of them generally, thoroughly unlikeable from the start of the film—storm a previously-uncharted island that could be teeming with never-before-seen, scientifically-valuable and historically-significant creatures and artifacts and biological plants and fauna in a brigade of helicopters—-and the first thing this group does is instantly drop a barrage of explosives into the wilderness, causing instant chaos, harm, destruction and general idiocy, ignorance and stupidity.  This all happens in the first scenes, and more intelligent viewers—like many at a recent screening—will just sit there in their seats, dumbfounded, slackjawed and completely shocked at just the overall sheer idiocy of this scene.  Viewers will just wonder why and what is actually happening, and will naturally think that anyone with any degree of actual, real intelligence would never instigate this type of operation at this type of place at any time during the entire history of mankind—even in the overall context of a sci-fi monster movie.

This initial scene is so amazingly dumb as a basic story and plot point—on every level, even in the imaginary context of a monster movie and even considering very basic suspension of disbelief in a fantasy and sci-fi movie setting and in every other filmic consideration—this course of action sets the course for the continuing reign of dumbness that follows in this scattered, shattered mess of a movie:  After the crew stupidly drops these bombs, well, within what seems to be seconds—obliterating any possible hope or sense of suspense, tension or build-up in terms of basic story, plot, story arc or story development—Kong just suddenly appears, just standing there, clenching his fist, yelling, and ready for a fight.  That’s it—right out of the bat, there it is, just—there.  Again, no build-up, no suspense, no tension on any level.

And then—another level of dumbness, even in, well, all of the aforementioned contexts:  Kong just suddenly starts batting down many of the helicopters in the squadron, sending the copters, people and gear crashing to the ground in horrible fashions.  What makes this scene so dumb is that the way the scene is clumsily, awkwardly staged and constructed, the filmmakers want to make the already-stunned-into-numbness viewers believe that the copters, filmed at first from far away, suddenly, oddly, weirdly, could not get out of the way of this big ape—who’s just standing there, barely even running at the copters.  Kong just starts waving his arms—and copters conveniently crash and people are killed.

And that’s just the first few minutes of the movie, and it could be recounted as Kong would tell it:  Dumb, clueless people invade never-before-seen island.  People drop bombs.  Kong steps into frame.  Kong waves arms.  Kong knocks down helicopters.  Kong kills people.

A quick look at the watch at this point would indicate that there’s still about two long, horrible hours left to go—and the numbness just increases.

The movie does not get any better after these first bizarrely weird opening scenes.  That’s because all the rest of the movie involves dumb, unlikeable people running through forests trying to avoid being eaten by a parade of special-effects monsters whose only purpose in the story seems to be—to kill people by eating them.  That’s it.  There’s no talking apes—which would have helped.  There’s no capture of the beautiful women to lead to ruminations on beauty and the beast and all of the deeper, more intelligent, more complex themes, messages and introspective thoughts about man and beauty, beauty killed the beast, man’s inhumanity to non-men, and the dozens of other themes that previous King Kong movies actually tackled in far better manners.   The best of this lot was most noticeably Peter Jackson’s excellent, intelligent, suspenseful, fun, exciting, classic—and quite classy epic “King Kong” from 2005.  Now, that was everything that “Kong: Skull Island” fails so miserably to be—entertaining, thought-provoking, tense, smart, clever, beautifully-produced, strongly-directed, well-acted, and well-written.  Do you want to see a great, epic King Kong movie?  Then rent or buy Peter Jackson’s version—and you will love it, if you haven’t already seen it.

But “Skull Island” has just one, single, sole, lonely positive attribute to its credit—the overall collection of special, visual, computer, model, matte, green-screen and computer-generated-imagery technological effects.  They are indeed excellent.  But that’s it on the plus-side for this movie.  The movie,  like some of the similarly-awful latter “Jurassic Park” movies, or like most of the “Godzilla” movies throughout history,  or like all of the “Predator” movies, or like all of the “Alien” sequels, or like, really, most monster movies throughout film history, is mainly trying to exist, entertain and succeed based solely on the succession of modern-day, technological visual and special effects—and dumb people getting killed and eaten by monsters.  But as filmgoers need to be reminded too often these days, or these decades now, a sequence of dazzling special and visual effects does not singularly make a movie whole, entertaining—or good.  And neither does a series of scenes involving, basically, only people dying and getting eaten.  There is more to life—and movies—than people getting chased and eaten by monsters and a batch of technological bells and whistles.

There needs to be far more, and that, again, is where “Kong: Skull Island” falters.  There is no there, there.  There is no depth to the movie—in terms of basic filmic factions such as direction, the script, dialogue, story, plot, story arch, characterizations, character development, story development, character arch, plot development.  There is simply no depth to the story, in general.  The movie, again, is basically people running through the woods, chased by monsters.  Yes, that point needs to be made over and over again—just like that basic plot point that occurs in the movie.

The acting, from a group of usually talented and reliable actors, is perfunctory, and serves its purpose, but, again, without a deep, intelligent script or original direction, there’s nothing special about the acting performances.  However, any lack of depth regarding the acting in “Skull Island” is not necessarily the fault of the actors, most of whom actually shine in their performances.  It’s that darn script and story again.  When the overall movie doesn’t give actors much to do other than yield guns or bombs or knives while fighting monsters, and, for much of the cast, trying to avoid being eaten—or actually being eaten—the actors can’t be faulted with the overall basicness of the acting.

The story, such as it is, basically involved that aforementioned team of government agents, explorers, scientists and soldiers invading that island to see what is there, to uncover whatever may live there, and to prove to the world that a previously-uncharted island could be the home to scientifically-valuable creatures.  They not only find Kong, but they find much more on the island.  And, yes, there is a somewhat stilted explanation later in the film for why, exactly, Kong appeared and started wiping out the helicopters and people—but the lame, long-to-the-game, desperate explanation still doesn’t make up for the sudden, abrupt, and suspense-less manner in which the early scenes were crafted and filmed.  Again, since the suspense was gone early in the film, any later attempts to explain the previous lack of suspense just falls short.

If the writers—and somehow, there are three of them credited to this film—had altered their script immensely, and changed the entire focus of the entire film to be centered on Reilly’s character, and his connection to Kong, and his life on the island, with all of this explored far more in depth, and perhaps with some original flashbacks on Marlow’s life on the island—that would have instantly contributed to a more deep, probing, intelligent and original movie.  Reilly as Marlow simply steals the film, showing how an actual, likeable, original character with an actual original story and backstory can contribute to the enjoyment of a movie in an inventive manner.  But, once again, the director, writers and producers are still so concerned and so focused on the monsters and murders and special effects, they completely lose the chance to focus on Marlow and they lose the chance for any resemblance of an original film.

The film dares to suggest that it needs to be seen in 3-D or on an Imax screen, and, essentially, there is barely any 3-D worth noting or getting excited about anywhere in the movie—it’s just not there.  And, no, “Skull Island” does not need to be seen on an Imax screen.

And, to add to all of this mess, the filmmakers dare to tack on a tacky, also-hackneyed, post-closing-credit epilogue scene—one of those tired, clichéd and unoriginal post-credit tack-on things that many superhero and comic book movies dare to use to lead people to the next movie in the series.  Well, there was simply no need for this Kong movie, and there certainly is no dire, pressing need for another Kong movie in any foreseeable future.  For that reason, the sheer presence of that post-credit sequence was far more scary, far more frightening than anything that was previously seen in the movie.

There’s a room and a time and a place for fun, entertaining monster movies, of course, and they are welcomed, of course—if they are done well.  In fact, 2016 was a banner, wonderful, positive year for several great fantasy, science fiction and supernatural films that did include some scary monsters.  But that collection of films were films that added more depth to their stories, scripts, characters, dialogue and themes, letting those basic filmic elements compliment—and not be overtaken by—the special effects.  “The BFG,” “Alice Through the Looking Glass,” “Fantastic Beasts and Where to Find Them,” “A Monster Calls,” “Miss Peregrine’s Home for Peculiar Children,” “Pete’s Dragon” and other similar, quality, enjoyable films in 2016 all contained monsters—but these, again, were also excellent, entertaining films that succeeded on all filmic levels.

It’s time for filmmakers to put these big-budget, only-special-effects-centered, empty-brained type of monster movies to rest and focus on intelligent, introspective, probing, thoughtful films that strive to make a point, have smart, likeable and care-able characters, focus on a theme, present an important message—and tell a good story.  The more realistic, reality-based human monsters—or, yes, actual fantasy, sci-fi and supernatural monsters—are always more scary, more suspenseful, and more entertaining, when presented in the overall context of a film that tries and manages to succeed intelligently at all filmic levels.

As one of the themes that does manage to come through—although just slightly–in “Kong: Skull Island” warns—sometimes, man is not meant to visit certain islands, places and creatures on Earth too often—or at all.  That’s a lesson that some filmmakers need to heed—because, out in the moviemaking world, sometimes man is not meant to go to the monster movie well too often, lest that monster story end up irreparably broken at last.