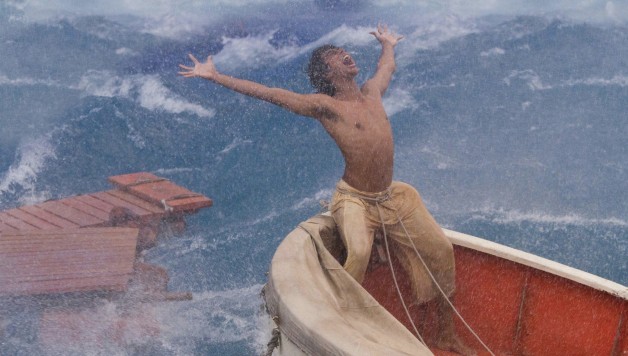 Nobody reading Yann Martel would have imagined that his Booker winning allegory of a starving tiger and a starving boy at sea would turn out to be such a feast for the eyes. Production designer David Gropman and cinematographer Claudio Miranda conjure up indelible scenes – a sinking, lit-up shipwreck, a live menagerie hurtling many fathoms down, a roiling typhoon, a humpback whale lobtailing on waves, marine bioluminescence, flying fish, a lone boy on a raft on a membrane of serene liquid glass, multiples of meerkats on an iridescent flesh-eating island.

The serene mysteries of the blue briny deep, or nature, red in tooth and claw – no matter what the lens captures, eyes will pop, jaws will drop, souls will be stirred in a way that no CGI or 3D has any business stirring. The dangers of a vegetarian teenager sharing a tiny 27-foot lifeboat with a 450 pound royal Bengal tiger, a bereaved orangutan mother, a wounded zebra, and a savage hyena at such gnawingly close (hind) quarters are full of teeth-gnashing realism and nail-biting suspense. This carnivorous carnival of Nat Geo-rivaling verisimilitude makes it hard to guess that the “sea” is actually a mammoth water tank in an airport in Taiwan, that only 23 actual tiger shots have been used in filming, and the rest is all high-tech magic and Ang Lee’s coaxing direction. In the mesmerizing heart of the film, a boy called Pi (short for Piscine, “Pissing” to mean school kids), a tiger called Richard Parker (so named due to a bureaucratic mix-up), god and the Pacific are the only characters left for miles and months on end.

Nature without mercy, an ocean without measure, and images without words nudge us to contemplate the infinite. The film, not content with gentle nudging, pushes for a more overt spirituality – the fluttery frame is provided by a writer (Rafe Spall, who replaced Tobey Maguire) getting an older Pi Patel (Irrfan Khan) in Canada to tell a “story that will bring me closer to god”. Are we 3.14159265359 times likely to be exalted for having heard the grown-up Pi’s metaphysical musings at the end? Not really.

That Pi is a transcendental number must surely count for something in this film rife with symbolism and symmetries. For example, the sign by a teenage dancer’s (Sravanthi Sainath) of a lotus in the forest, inexplicable to Pi as a teenager, foreshadows the flower with the tooth inside in the lush, flesh-eating island he visits later. Against the wishes of Pi’s religious mother (Tabu), Pi’s father (Adil Hussain) makes Pi watch a zoo tiger eat a helpless goat to teach him respect for nature, a lesson that comes in useful later on in his life-and-death dealings on the boat. Pi’s embrace of three religions (Hinduism, Christianity and Islam) at age 12, defying his father’s love for science, surfaces in the lessons of pantheism drawn from his seafaring struggles. Pi’s double major in zoology and religious studies in Yann Martel’s original book sets the poetico-philosophic tone, a little uneasily reflected in the film.

Luckily, the younger Pi’s story is more potent – his childhood (played by Ayush Tandon) with his family zoo and his school mates in the French coastal outpost of Pondicherry in India, a teenaged Pi (Suraj Sharma) setting sail for Canada with his family and animals in a cargo ship with a vicious cook (Gerard Depardieu), getting marooned on a boat in the South Pacific, fleeing from an enchanted island, washing up ashore in Mexico, beginning a new life in Canada. The wonderful thing about a film by a Taiwanese-born, New York-settled director, based on a book written by a Spanish-born Canadian is that the setting doesn’t really matter.

The film is mostly anchored in Lee’s stunningly rendered picaresque. Pi (played by Suraj Sharma) falls back on a survival manual, provisions, faith and pluck. The shaggy dog tale is made believable through animal trivia, brutal food chain reality checks, and survival strategies. Choices are stark. Sink or swim, kill or be killed – or in Pi’s case, eat and be eaten (if he feeds himself and lets the tiger starve, he will be the tiger’s next meal). It is interspecies bonding at its most humane, storytelling at its most natural. How does 16 year old Pi keep his sanity on his 227 day odyssey? When do rations run out? Which is worse – being pounced on by a tiger, or peed on? Pummeled by storms, or parched by the sun?

This central narrative, whose basic questions are so visceral, stays afloat far better than the adult Pi’s deconstruction of the shipwreck to the Japanese shipping company investigators, and his disappointing alternative version at the end. We are cast adrift whenever Lee moves away from present spectacle to pious treacle – slightly gawky, grown-up New Age-y god vs man, truth vs fiction discussions. The luminous seascape scenes without speech say much more about the struggle between all that is base and all that is pure within us, the love that can grow between man and beast, and the beauty and horror contained in the universe.

Life of Pi is also a leap of faith for flirting with filming no-nos – oceans, animals, and unknown underage actors. (A Subway sandwich was all it took for Suraj Sharma to join his older actor brother for his audition – the teenaged, untried non-actor came for his sandwich, and walked off with the role.) With its $100 million budget and easy PG-13 rating already pushing the film towards box office and Oscar success, it is easy to forget that it passed through many famous hands – Alfonso Cuaron, M. Night Shyamalan, and Jean-Pierre Jeunet – before Ang Lee stepped up to save the day. With Life of Pi, Lee treads deep, unfamiliar waters, but then he has always pulled off varying subjects – a lady-like romance full of Sense And Sensibility in Kent here, a student uprising full of Lust and Caution in Shanghai there, a Taiwanese closet gay here, a broken-hearted gay cowboy by Wyoming’s Brokeback Mountain there. Lee’s Hidden Dragon of aerial martial arts fame may be absent this time around, but the fierce 450 pound crouching tiger here effectively lunges, roars, splashes, strides into an island forest without a backward look. And in an unforgettable drowning scene close-up, it mutely beseeches us with desperate eyes – substantiating (beyond any rational doubt Pi’s father could express) the ancient Hindu belief that animals do indeed possess souls.