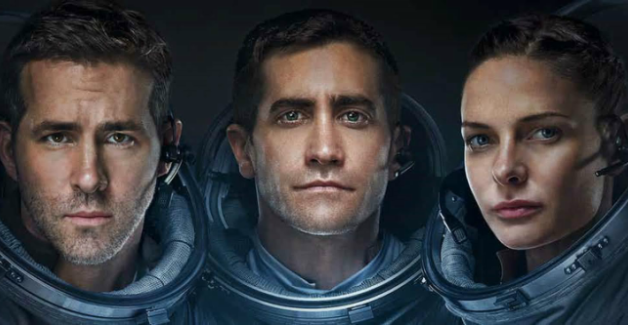 “Life,” a disappointing science-fiction film opening today, Friday, March 24, 2017, desperately wants to be “Alien,” “Gravity” or some weird hybrid of the two, but the movie fails miserably at coming close to either of those films’ quality. “Life” is, overall, another big-budget, heavily-advertised, early-year failure, and the film is definitely not recommended, as it falls into the same dumb trap as the recent, equally-disappointing and dumb “Kong: Skull Island:” There is strong acting, direction, production and special and visual effects–but the story is, well, lifeless. It’s basically—very basically: Astronauts bring home alien creature on their ship, alien creature gets loose on the ship, alien creature kills everyone, end of movie. That’s just about it–and it’s not enough to sustain the film.

The same basic overall problem plagued “Kong” because that big-budget, heavily-advertised, early-year movie had an equally overly-basic plot and story: Soldiers and scientists land on island. Kong and other big monsters chase soldiers and scientists. Kong and big animals eat soldiers and scientists. End of movie. However—before “Kong” fans get too upset: Yes, “Kong” at least made somewhat of an attempt at some very minor backstory, subplot and explanation for some of the movie’s more ridiculous actions, but, still—it wasn’t enough. The backstory attempts were too thin, and were not fleshed out enough to counter the constant tearing and shredding of human flesh by big monsters that dominated that film.

Amazingly, “Life” is even worse than “Kong”—there is just about zero back story, subplots, and just about zero story development, character development, plot development, depth, probing dialogue, in-depth analysis, messages, themes, and just about zero time spent in any resemblance of intelligent, insightful or perceptive talk, analyzing, discussions about just what is going on, what they should be doing, or even delving into the very serious consequences that forms the very foundation of the movie’s story: obtaining a sample of an alien life form from Mars from a Mars probe, bringing the Mars organism aboard the International Space Station and analyzing the Martian creature in a Space Station laboratory. Even the most infrequent moviegoer, half-asleep in his chair, suffering from a lack of sleep and with a severe head cold and pounding headaches deep in the throes of delirium would reason and figure out within “Life’s” first few minutes that either this decision to bring this organism aboard the station—in the context of a movie—is either very stupid, or something horribly wrong is going to happen to everyone on board and the station itself—or both. So not only is the story horribly flat, uninspired, unoriginal and lacking in any type of depth—it’s also terribly predictable.

It wouldn’t be too surprising if original “Alien” screenwriter Dan O’Bannon and original “Alien” director Ridley Scott would start having serious flashbacks to their movie while watching “Life.” They should also get on the phone to “Life” director Daniel Espinosa and writers—there are two of them—Rhett Reese and Paul Wernick and ask for some credit in the credits of future copies of the movie. Because no one who has seen “Alien” can sit through “Life” without thinking—point-black—that “Life” is just a complete rip-off of “Alien.”

There are very limited, very tiny attempts at rounding out the “Life” astronauts—but those attempts are too thin, and they don’t even amount to basic backstory and basic subplots to adequately support or enhance the main, paper-thin story. One astronaut is apparently captivated by another astronaut; one astronaut prefers space to earth; and another astronaut’s wife gives birth to his child back on Earth. But, again, none of these attempts to flesh out the characters is presented in an adequate manner to provide any real depth amid the prevailing mayhem, chaos—and killings.

“Life” also attempts to replicate the atmosphere and aura—and, in part, in a way—the story of “Gravity.” However, “Gravity” had a gravitas and a grandiose nature, and a constant, underlying maturity, professionalism and intelligence—along with subplots, sharp dialogue and an overall atmosphere that projected importance—all of which are completely missing from “Life.”

As noted, the problems rest squarely with the script, dialogue, story and plot of “Life”—and not really so much with the actors, director, producers and the hundreds of visual, computer and special effects workers. The actors—basically, the six leads who form a nice, comfortable ensemble of six astronauts on the International Space Stations, and who are Jake Gyllenhaal, Ryan Reynolds, Rebecca Ferguson, Hiroyuki Sanada, Ariyon Bakare and Olga Dihovichnaya—all do a great job, with the limited story, script and dialogue that they are given. However, that said, the script still doesn’t provide them with much to do than run around the station either looking for the creature, running from the creature—or dying those horrible, too-bloody, too-gory deaths.

Espinosa’s direction is strong, on some levels—he manages to present a claustrophobic, smothering, scary atmosphere on the station once the creature gets loose; he handles the aforementioned bevy of special effects well—the creature is at least an original-looking and original-acting organism; he gets some strong reactions from his actors; and he mixes some suspense, terror, horror and tension amid the science fiction, but—can you guess—in the end, he doesn’t have much to direct other than—you did guess it—a creature running around a space station killing astronauts.

The production, in terms of the production, art and set design, special effects and overall sci-fi presentation, is exceptional—never does the viewer doubt that this movie takes place on board the International Space Station, in space, and all of the scenes on the station and around the station when astronauts take space walks are believable, breathtaking, impressive and, yes, for the production and art design, highly-watchable. However, loads of beautiful, believable, breathtaking production, art, set, sound and effects designs still do not make a movie whole. Even with all of this quality production, set and art design—there still needs to be an intelligent, probing story to balance everything out.

Toward the end of “Life,” one of the astronauts delivers a rushed, desperate, breathy and somewhat crazed monologue in which she attempts to warn about the dangers of bringing alien life forms onto a space station, into contact with humans, and, possibly, in contact with other worlds, including Earth. The astronaut presents, of course, a valid point: Who knows what dangers lurk amid alien life forms found on other planets? But, alas, the lesson, the monologue, the point, occurs far too late in the movie, and it’s simply too little, too late in the proceedings to make up for the preceding lack of depth in the movie. Life” itself presents itself as a movie that’s too little, too late,” and a movie that was also a bit desperate in its attempts to please moviegoers. “Life” needed much more depth, and, as it is now, in the end, it’s simply another forgettable sci-fi monster movie.