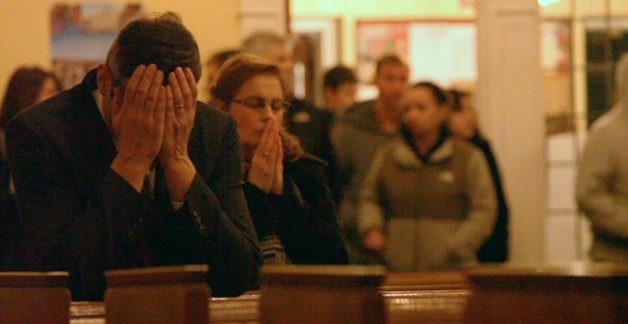 This highly honored film is a documentary addressing the aftermath of a devastating shooting at  Sandy Hook Elementary School in Newtown, Connecticut in 2012. The filmmaker heard of the shooting on a car radio and knew immediately she wanted to make a film about it and quickly moved into action.

A twenty-year old man, who lived close to the school, first killed his mother and then appeared with an assault weapon and a Glock and a Sig Sauer at the door of the school and shot his way in. In addition to killing 20 first graders, he also killed teachers, a principal and a librarian. As the police arrived, he killed himself. What we know of the shooter, we know from news articles, not from the film as Kim Snyder has chosen not to take the more usual path of exploring the killer, but rather to film the aftermath of the deaths he caused.

The aftermath is almost unthinkable, but the very point of the film is to make us think about it, and to preserve the experience for future viewers The wisdom and control of the Director and the trust she earned from the bereaved families makes this film extraordinary, but not impossible to view. It should be seen. She asks us to think not only about individuals, but also to see the risk of destruction of families as parents and friends try to hold on to memories and to re-connect with each other.

The film makes clear from its interviews that everyone involved is in shock. First responders have to contend with severe emotional reactions; teachers and children who were in the school need help. An elementary school teacher is often a major person in the emotional life of a child. Seeing your teacher killed must be judged as a terrible event. This was a large school with hundreds of students. How do you help the children who survived?

So, as with a political assassination that threatens the national security and leadership; a school shooting not only destroys the lives of children, but it also affects the safety and order of an entire community. This is far from the first school shooting, as a country we have suffered many of them. If you doubt this, check out school shootings on the Internet and that list doesn’t include events such as Orlando or San Bernardino. One of the saddest things about these shootings and one of the reasons this film is such a valuable document, is that we tend to react and then suppress our memories of even recent school shootings and fail to understand the long-term needs of such a community.

For the Director, the issue of gun safety, gun ownership and arguments about how guns fit into our society, is a real one. But perhaps, this movie demonstrates not only that this is an urgent issue, but also that we need not only more fortified schools, but also some better grasp of the troubled members of our community.

The families that took part in this film made a tribute to their children and deserve our attention. They gave us what they learned and what actions they would like to see made to prevent future tragedies. The filmmakers operated with care and the film never slips into melodrama. Every member of this crew deserves high praise. We need this film.

Is this film too hard to see? No. It is gripping in a way no scripted film could be. It leaves us more sensitive to all the issues that need to be addressed. It is a salute to the dedication of parents.

I found myself preoccupied with the power of the film. The times that I have seen it audiences have been riveted, quiet and very moved. I think of it as a document of American history. A documentary is a special form. This form is a specialty of Kim Snyder. One definition is that a documentary is a film that is largely unscripted, capturing the real people who were involved, filmed without actors, and with the purpose of presenting issues or actual events. It is assumed to be objective, but more often than not a documentary grows out of a cause and has a distinct point of view. It is assumed to contain or portray real facts, real people or real places. This film is an exemplar of its kind.