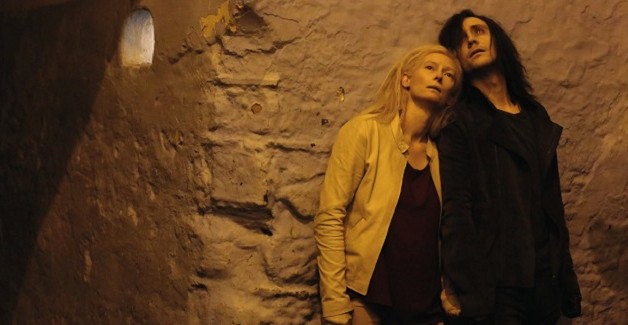 A vampire love story.  A Jim Jarmusch movie.  A Tilda Swinton movie.  Set all your expectations aside except for the reminder that this is a Jim Jarmusch movie.  It will draw you in.  This is a brilliant film, a little tragic and very amusing.   Adam, played by Tom Hiddleston is a reclusive rock and roll musician.   Eve, played brilliantly by a totally beige Tilda Swinton, is an intellectual who speed reads all the books ever written.  They have been married for centuries, but are marvelously sensitive to each other and they live far apart.  They talk on Face Time.  She lives in Tangier, he in Detroit.  They live in the dark and find hospital-screened blood to buy so they can be sure they have “the good stuff.“  Jeffrey Wright plays Dr. Watson, the somewhat nervous phlebotomist who black-markets the blood.

Adam is world weary and depressive, almost despairing:  Eve is content, goes out dressed in a simple beige suit and at home dresses in extraordinary silk embroidered robes.  Her best friend is Christopher Marlowe who is still sulking over “that illiterate” who claimed to have written his plays.  Marlowe peevishly says that Adam “was ruined by hanging out with Shelley and Byron.”  Some how it seems right that grudges last centuries.  The question is can love triumph over depression and suicidal impulses?   We know that Adam is suicidal because along with the antique guitars he orders his friend Ian to find, he asks him to obtain a wooden bullet made of the hardest wood available.  A dead giveaway for vampire fans.

This is a dreamy movie, lit low with jewel tones and amber lights.  The vampires wear sunglasses whenever they go out.  They also wear very chic gloves, a new costume touch, according to Jarmusch in an interview at the Cannes Film Festival, because “vampires are always cold.”  They live in the dark and every bloody scene has layers of references of all kinds: literary, musical, and philosophical.   It is witty, dark, and of course, a comment on the mess the “zombies” have made of the world, breaking it down and contaminating it as well as themselves.

Tangiers is exotic and decadent.  Men promise Eve “something special,” as they watch her walk along small alleys.  Drugs are everywhere, but ignored as the vampires are only interested in blood.  When they drink the blood their mouths, lips and teeth are coated deep red.   Quite an effect, making it surprising that no one has invented colored mouthwash as a cosmetic.

But the love story is remarkable.  Anyone would want such a love in their lives and while it isn’t easy to be married for centuries, there are lessons here.  The lovers are exquisitely tuned to each other.  You can almost see the connection between them.  When Adam sinks, Eve books a night flight to Paris connecting to Detroit.  Seen at night, today’s Detroit is a wonderful place for reclusive vampires.   Adam takes Eve on a guided tour of the City including the deserted Packard plant, the huge ornate theater ruins that still remain and down streets of deserted homes and vacant lots.   And Adam appears to be driving a Jaguar—a foreign car in Detroit, a slap in the face of Motor City.

When Adam and Eve come together they are truly lovers, there are echoes of John Lennon and Yoko Ono as they sleep naked and beautifully white facing each other on black sheets.  They can do for each other what no one else can do.  They define love.  But life is hard; Christopher Marlowe is dying because he got “bad stuff.”  Eve’s sister, played by Mia Wasikowska, is a pain and she comes unexpectedly to visit.  Eve tries to calm Adam and reminds him he hasn’t seen her in 87 years.  She is a great drummer and an irresponsible sex pot.  She sulks and urges them to go out to a club and then gets drunk or high or both and bites Ian, Adam’s only friend.  “You drank Ian,” Eve screams and throws her sister out.  They flee back to Tangier.

Jarmusch has an amazing list of successful movies, but it always seems that each one is his first and his best.  He is deadpan but never jaded.  I thought “Night on Earth,” was my favorite, although I loved “Broken Flowers,” and his “Coffee and Cigarettes.”  He creates entire worlds in his films and brings you for a few hours into his highly idiosyncratic world.  What a treat.  My motto is: Don’t miss a Jarmusch movie.