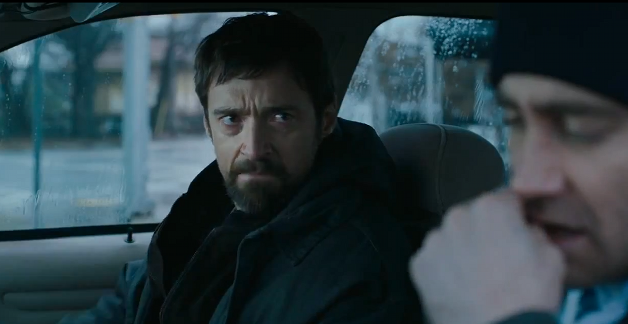 I had spent the day watching the news about the shooting rampage at the Washington Naval Yard that is within walking distance of my house. I hoped the film with its many wonderful actors would distract me. It did, but as soon as it ended, the film seemed to blend with the news of the day and to be all too real. Denis Villeneuve directed one of my all time favorite films, Incendies, and described Prisoners in a Director’s Statement as his “Hollywood effort” after doing independent films. Unfortunately this film did not honor the exceptional talent that went into it.

Hugh Jackman plays Keller Dover, a plumber living with his wife, played by Maria Bello, in a low middle class suburb in Pennsylvania. The movie opens in a wintry forest as he teaches his son how to shoot a deer. The opening reminded me of the first scene of the movie Hannah, making the case that violence is acceptable and needed in order to be safe. To further make the point there are references to “needing to be ready for anything.” The son, played by Dylan Minnette, is disquieted as are others who watch the venison being prepared for Thanksgiving dinner. The Dovers and their neighbors, Franklin and Nancy Birch, played by Terrence Howard and Viola Davis, look exhausted and as they relax after the meal, they realize that their young daughters had gone out and could not be found. The older children, the Dover son and Birch daughter look uncomfortable with their parents as they all run out to try and find the missing girls. Eliza Birch is played by Kyla Drew Simmons. An RV that had been parked outside the Birch house disappeared and quickly became the target of the search.

This movie cannot be thoroughly discussed without issuing countless Spoiler Alerts. It addresses American violence in all its riveting horror and lurid variety. Hugh Jackman earned raves from critics who saw the film in the Telluride or Toronto Film Festivals, but I wish he had never played in it. He turned in a wooden performance, caught perhaps by the script that gave more intensity to the father’s violent tendencies than to his anguish. There was one moment, when he recognized a dirty, sock that his daughter had worn, that showed what he could have done with the part had it been better written.

Viola Davis and Terrence Howard as the Birch parents, displayed true desperation and pain as they went through the motions of searching and waiting. They conveyed true knowledge of how the effort was sure to damage them forever and bore it in the effort to find their child.

Detective Loki, played brilliantly by Jake Gyllenhaal, brings a much needed quiet center to the search and its twists and turns. We read his mind through his extraordinarily expressive eyes. He carefully under reacts and thinks his way through every move. He turns each page literally and figuratively. Tough and agile, leaping suburban backyard fences and focusing on every word spoken to try to discern the truth, he plays a man who has accepted the law and police work as a discipline and even a holy commitment. He literally risks his life to save little Anna Dover, played by Erin Gerasimovich. I held my breath during his desperate drive to the hospital.

Be careful if you decide to see this film. The blood is too red, the horror too shocking. The ending is too cruel and ultimately the film is unsatisfying and exploitive.