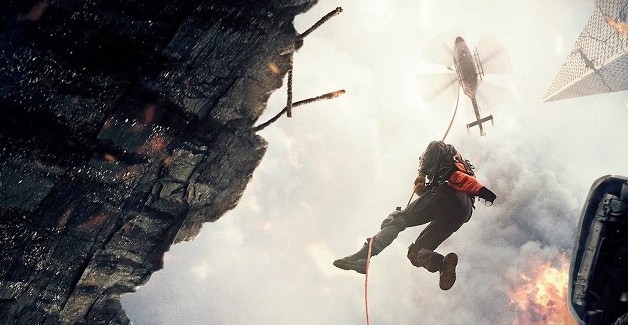 Forty-one years ago, in 1974, an over-produced, overdone, hokey, campy, corny, special effects-drenched, goofy and somewhat-embarrassing monstrosity of a movie, “Earthquake,” was somehow released upon the masses, and, although a box office hit, many intelligent film observers cringed at the movie’s overall ridiculousness, and they hoped and prayed that the movie would bring a quick, abrupt end to the then-popular disaster film genre that was stinking up movie theaters.

Well, alas, those prayers did not come true, unfortunately. Here we are, forty-one years later, in 2015, with another over-produced, overdone, hokey, corny, special effects-drenched, goofy and completely embarrassing monstrosity of a movie, “San Andreas,” about, well, an earthquake, stinking up movie theaters again. And, alas, during the previous forty-one years, filmgoers have continually been bombarded with a stream of similarly overdone, campy, corny and embarrassing disaster films—few of which ever seen to rise above either terribleness or a just-barely-average level.

“Earthquake” was about an earthquake that destroyed much of Los Angeles. “San Andreas” is about an earthquake that destroys much of the West Coast, including San Francisco. Both films, and especially “San Andreas,” drown—like many of their characters—amid a sea of tiresome special effects that, essentially, show basically monstrous scenes of destruction reigned upon buildings, bridges, dams, roads, rivers, towns, cities, people, cars, infrastructure, the earth, waterways, even bucolic parts of the country outside of cities. In “San Andreas,” there is simply so much destruction, so many special effects, so many scenes of simple total chaos, destruction and obliteration—including bizarro shots of people getting killed in various gruesome manners—that, like so many other special effects-drenched modern-day films, it all becomes the same: a blur, a mess, an eye-glazing-over mind-numbing montage of mayhem and monstrosity that dulls the senses, dulls the mind, dulls the imagination, and dulls the enthusiasm for finding any sense of intelligence, cleverness, originality and uniqueness in these types of overdone, over-produced big-budget summer blockbuster movies.

“San Andreas” ends up simply being, despite its budget and special effects and big-name stars and big budget production costs, a terrible movie, drowning and dying like the movie’s victims amid its own self-made disasters of overdone, over-produced production; stilted, unoriginal, cookie-cutter and wholly by-the-books direction; okay acting by competent actors, but acting that is brought down to average and even below-average levels by the corny, campy and dumbed-down script; and, as just noted, a script that is so unoriginal, so lacking in cleverness, so empty, and so completely lacking in intelligence, depth, backstory, character development, story development, subplots, conflict, tension or suspense (despite attempts in several of these areas), it ends up just being an embarrassment. The script, direction and production are also thoroughly clichéd on every level—even with the special effects—and the film brings nothing new to any of these areas in the disaster film genre. It’s simply the same over-done disaster film we’ve seen over and over again during the last forty-five years, at least.

For example, “San Andreas” is one of those movies where nearly everything happens to characters within split seconds of time: A woman runs along the top of a crumbling high-rise, just barely out-running the roof’s collapse, literally step by step. Of course, every piece of roof crumbles just after the woman runs past it. Another woman is rescued from a car by a helicopter crew just within seconds of the car plummeting down a hillside. A man hides behind a building within seconds of debris blowing by. A car stops within feet of plummeting into an earthquake-created ravine. A woman escapes from a car—just seconds before the car is crushed. Characters escape from a crumbling building—just seconds before the building collapses. And on and on. It’s just ridiculous.

For example, despite the complete destruction of San Francisco and much of the West Coast, the film gives the insane impression that the world centers completely around five people struggling to survive. At times, it seem these five are the only people who are able to survive horrendous destruction—and that, again, these five people appear to be able to survive all of the destruction while, seemingly, most of the millions of people around them can’t seem to be also able to survive in quite the same manner. Filmmakers will argue that this storytelling tactic needs to be employed so the viewer has central characters to focus on and sympathize with, but in “San Andreas,” the filmmakers create such a ridiculously moronic narrow and tunnel-vision view of the crumbling world, it often appears, simply, that they didn’t care about–or couldn’t afford–to add just a few more characters who are also struggling to survive. As it is, the film has very few others struggling to survive, so you’re left with five people who seem to inhabit their own miraculous-like ability to survive while nearly everyone around them suffers horrible deaths. It’s just ridiculous.

For example, the movie offers very little political, cultural, environmental, sociological, historical and scientific backstory to the issue at hand—earthquakes. There is some lame attempt at focusing on the work of some university researchers and scientists and their academic, scientific work with earthquakes, but, again, there is so little depth, substance, backstory or fleshing-out of the scientists’ work, that side story becomes just about worthless and non-existent. Just like everything else in this terrible movie, the movie casts aside the scientists to focus on something else blowing up, falling down, crumbling, exploding or killing people. Additionally, the scientists, including one played by poor Paul Giamatti, are given, again, clichéd, stilted, moronic dialogue that does nothing to add to any dramatic story or tension.

Those are just a few examples of just how badly “San Andreas” fails on every level.

The story centers around a Los Angeles helicopter rescue pilot played by Dwayne Johnson, and his attempts to rescue his wife and daughter as an earthquake starts to tear apart the West Coast. Meanwhile, Giamatti and his crew work to alert people about the earthquake—but even that subplot is handled so moronically, it just become nothing—as soon as they need to alert officials, the earthquake strikes—allowing for those scenes of endless destruction—and there is absolutely no tension or suspense regarding the actions of the scientists. They, like everything else, are just cast aside, as noted, for the next scene of something having to do with special effects.

There’s not much else to tell about “San Andreas.”

First, why can’t filmmakers find an intelligent, decent role and film for Dwayne Johnson? He’s a likeable guy, smart, funny, personable, even a tiny bit humble, built like a Mack truck, with a strong screen presence and an apparent talent for appealing to various demographics. Yet most of the films he appears in are, in a word, terrible. So far in 2015, his films include the terrible “Furious 7” and the terrible “San Andreas,” and there are others. Someone needs to find the right role and the right film for this guy—a dramatic independent film that takes him out of the moronic, dumbed-down heroic superhero type of role, and a film that presents him as a relatable, real-life-leaning human being.

Second, what is Paul Giamatti doing in this movie? He has a good presence and handles himself well, but, again, his character, like all other characters, is given clichéd, dumbed-down dialogue that does not nothing to further the character. Giamatti should be starring in historical dramas like “John Adams” or quirky independent films—a good domain for him—but he should not be appearing in films like “San Andreas.”

Third, what is the somewhat psycho, somewhat sick, completely perverse attraction of seeing people killed in multiple horrific ways in disaster films? In “San Andreas,” a character has his foot impaled by a metal rod and then falls to his death in a crevice; several people are crushed by falling concrete; one man is killed with a cargo container falls on him; numerous people are swept away by waves and flying debris; several people fall off buildings; and people die in other horrific ways. Why is this entertaining? What does this add to the story? It’s not entertaining—it’s slightly sick—and it adds nothing to the storyline. Yes, people die horrific deaths all the time in film, but the trick is presenting those deaths in the right manner that connects to the story, the meaning, the message and the overall atmosphere of the story and film. The best example is the horrific deaths in, say, horror films or war films. In horror films, the deaths contribute to the horror—again, if done correctly. In war films, deaths symbolize the destructive aspects of war. In disaster films, however, the presentation of human death often appears to be simply a perverse device to show death and destruction for purely the reason of appealing to that horrible, hidden, oddball train-wreck-watching, rubber-necking part of the human psyche where people are momentarily fascinated with people dying. But that’s just curiosity, and when presented in a disaster film, in scene after numbing scene, these types of disaster film deaths are just unsettling, disturbing–and not entertaining.

Finally, why does Hollywood keep churning out these disastrous disaster films? In recent years, there’s been the equally-horrendous “2012,” the terrible “The Day After Tomorrow,” the completely unneeded and unwanted remake “Poseidon” (a remake of another somewhat corny and campy disaster film, “The Poseidon Adventure”), “Into the Storm,” “Twister,” “Tidal Wave,” “Dante’s Peak,” “Volcano,” “Pompeii,” and James Cameron’s “Titanic.” Out of all of these, and out of many more, the only one that rises above the dreck to be an actual quality film is Cameron’s “Titanic.”

Instead of heading out to the movie theaters during this last weekend of May, 2015, to see “San Andreas,” here is what people should do: Have a picnic, and bring plenty of ham, pork, bologna and corn. You will feel the same things as you would watching the movie—and you would have real nutrition for the mind, body and soul.