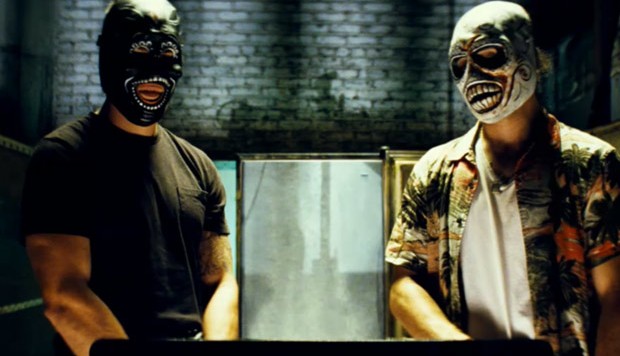 Shane Salerno’s show-offy script mostly succeeds, except for an epic-fail voiceover with a bad case of the cutes. It’s a relief to see Stone step back from his recent clunkers like Wall Street (Money Never Sleeps) and George Bush (W), and return, if not to his Vietnam classics, then at least to the campy mayhem that entertained his fans in the ’80s and ’90s.  Stone gave up cocaine during his cathartic Scarface screen-writing phase, but tales of addiction have defined him on and off camera. The gangster vs gringo/drug angle in Savages has already been explored less exploitatively in films like City Of God, Maria Full of Grace, Amores Perros, and Sin Nombre. Well, we can’t expect moving stories of helpless, humble folk from Stone, or even Pineapple Express’s comedy on hash-rich hedonism, or the docudrama feel of Traffic (Soderberg shares Stone’s anti-narc stance, less controversial than Stone’s pro-FARC one).

Ben grows his pot strong and his hair long. He “goes all Bono” by using some of his profits to save the Third World. If “Buddhist” Ben is the bleeding heart, “baddist” Chon provides the muscle to their empire. A war-scorched Navy SEAL, he has come back from Afghanistan with no soul, but lots of cash and cannabis seeds. Dennis (John Travolta) is their toke cop on the take. O with her orgasms, Ben with his peace pipe dreams, and Chon with his “wargasms” (one of the film’s many stupid puns) have a good thing going.

Harshing their mellow, to use urban slang (to go with all that prime Pacific-facing real estate, and primed camera-facing male butt), are some Mexican Baja baddies wanting a cut on their “joint venture” (groany pun theirs). The expansionist drug cartel sends a threatening video with Lado (Benicio del Toro) “going all Henry VIII” with mass decapitations, and his colleague (Demian Bichir) refereeing their reefer request in person. Chon finds this too much of “a drag” (double groan), and says, “You want us to eat your shit and call it caviar”. The drug boss, Elena (Salma Hayek), watching them on secret camera from Mexico, returns that insult by getting Lado to kidnap O. Ben and Chon choose revenge over ransom, take the help of their computer hacking, money laundering whiz (Emile Hirsch), and a crooked DEA agent, Dennis (John Travolta), who plays both sides. What follows is an interesting game of negotiations, fund transfers, consignment blow-ups, torture and counter-kidnappings in a bid to get O back. People are turned against each other.

The seasoned actors do very well here. A thick, balding John Travolta wheedles, bullies, double deals, and still manages to get some sympathy for his two daughters and a wife on chemo. With the Mexican lot, it’s all torture, cheesy hairdos and histrionics. The ruthless black wig-wearing Salma Hayek – now icy, now melodramatic – is perfect as the imperious black widow, Elena, who sometimes has maternal stirrings for O when her own daughter ignores her. With his ridiculous moustachio and pompadour, Benicio del Toro looks the part of Lado, an unhinged sadist that Elena is no longer sure whether to trust. When O protests at prison food, Lado feeds her steak piece by piece with a menacing knife. When O spits at him, he eats it with finger licking relish, and rubs his face all over her hair in a scene that is uncomfortably intimate.

The milksop Californian lead trio are a letdown. Jennifer Lawrence, who showed such intensity in Winter’s Bone, was first cast as O, but had to leave for Hunger Games. Pity. Her replacement, the far from lively Blake Lively, with her lightweight Gossip Girl vibe, makes us wonder if a spoiled girl like O could ever have two lovers. And if she did, if they would go to such lengths to get such a vapid victim back.

Aaron Johnson’s dreamy eyes and dreads are made to fill in for Ben’s peacenik ways. Taylor Kitsch’s hunky body is meant to indicate his battle weary past and his latent aggression. When we think of how convincing Tommy Lee Jones was as a war-singed soldier in Stones’ far more powerful Heaven and Earth, we can only shake our heads.

There is a lot of head-chopping, eye-melting, finger-impaling, kneecap-busting, and brain-splattering in the kitchen, cell, desert and seaside. In keeping with the general violence, the mommy role that Uma Thurman was supposed to have had is now only exists on their cutting floor. In one searing scene, Ben, a pacifist, is forced to set on fire a man he barely knows (Demian Bichir), and his trapped girl friend, O, is made to watch him live from her cell. For all that, Savages isn’t as hypnotic or hard-hitting as recently acclaimed films with similar themes and body counts, like Animal Kingdom (Australia) and Gomorrah (Italy).