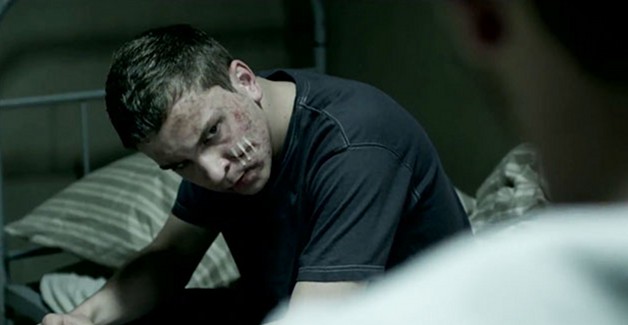 This is an extraordinary film, offering a view of today’s Germany as well as a tightly edited thriller.  Presented as part of the 2013 Film NEU series by the Goethe-Institut of Washington, and viewed at the E Street Cinema followed by a discussion with the Director Lars-Gunnar Lotz, the film has an unromantic view of violence and the hell it wreaks in everyday life.  Every detail is deliberate and intelligently presented making it feel more like a stage play than a movie.  Along with the lead actors, violence plays a role all its own in the film, staining everything like an indelible dye.

Set in a warehouse district of Stuttgart, a young man in a ski mask and his masked accomplice, carjack a woman and force her to make a withdrawal from her ATM.   As she hands over the money, one man beats and viciously kicks her as she lies curled on the cement. There is no need for the beating as she does not resist, but the opportunity  is all that the robber needs to inflict damage.  We cannot see the face of the man, and we do not know his name, but his sturdy body and his style make him instantly recognizable later when we see him in jail after being arrested on another crime.

Benjamin Graft, the young criminal, played by Edin Hasanovic is sullen and defiant, almost certain to spend his life in prison, until Niklas, a social worker, played by Marc Benjamin Puch, sees a potential client for his rural reform camp and convinces the boy to chose it over jail.  The camp, named Waldhaus is without locks and guards and appears attractive, but its psychological controls and its process of using each inmate as a guard, is as highly regulated as a place can be.

In America we at least give lip service to “understanding” criminals.  Here behavior, discipline and patterning replace cells and rolls of barbed wire atop of walls.  In this reform camp few scraps of past histories are provided nor are reasons sought for anyone’s behavior.  It is what it is.  There are no excuses.  The Waldhaus, is a tough place with little forgiveness for bad behavior.   Are walls, armed guards and cells tougher than the stringent demands for personal change intrinsic to this setting?  One asks for personal change while the other method asks for compliance.  At Waldhaus, there is a continuous confrontation about behavior carried out in many ways, but notably in a routine whereby one man stands in the center of a small circle and assesses himself and then others are invited to comment on him.

The members of the group are forced to confront their behavior and are continually pressed to accept responsibility for their acts.  There is risk and temptation in this setting, notably when the men swing heavy axes to split heavy logs.  The programs asks each man to attempt reconciliation with and to earn forgiveness from those they have injured.  At first, Ben challenges the rules and discipline with every part of his being and in return, receives a bad beating.  But seeing another inmate sent back to prison, he gives in and at least appears to be behaving but it is hard, having seen how vicious Ben can be, to believe he has changed.  Freedoms and privileges are granted in stages symbolized by animals and displayed by sweatshirts with various designs, a bear, etc.

Ben, is monitored from the beginning by his roommate, Tobi, played by Pit Bukowsky, who has achieved the highest level in the Waldhaus merit reward system.  His is an uneasy assignment as Ben radiates rebellion and there is risk for Tobi if he fails to monitor and control this dangerous newcomer.

Almost like Eve in the garden of Eden, Mariana, a young psychology student taking an internship at Waldhaus, played by Natalia Rudziewicz, stands too close, and is too taken with Ben, caressing him and infuriating Tobi who clearly cares about her.

But tension grows as we begin to realize that Niklas heads a family resident at Waldhaus.  This fact not so obvious until his wife Eva, played by Julia Brendler, returns after a convalescence from a beating and a miscarriage.  She has a tattoo of small stars behind one ear and this signals that she is the woman who had been beaten by Ben. The point of a murdered child is pressed home as Eva pores over sonograms that clearly show a fetus.  The rather touching idea that the resident family presents a model of normal behavior now becomes a dangerous challenge if not a naïve fantasy.  Ben instantly knows that Eva is the woman he kicked and beat so viciously.  He almost visibly gives off guilt and it becomes obvious to Eva that he is man who so badly injured her.

She begins to crumble.  The vulnerability of her family is frightening. It seems her husband is the last to know that Ben beat Eva and killed their child.  At Waldhaus the rule that each should forgive and be forgiven in turn almost breaks Eva who unable to forgive, feels threatened and conflicted.  During a confrontation she makes clear she knows what he has done and Ben breaks down and confesses.  He is quickly expelled and Niklas has the unenviable job of taking him back to prison.  Ben is stricken, not only with guilt, but with the awareness that he alone is responsible for losing the Waldhaus opportunity.  Tears run down his face and for the first time, one believes he can be redeemed.  The screams of the husband driving at breakneck speed become an opera of pain and suffering.

This spare film with its contrasts of beautiful sky and country and the dirty streets and rough jail of Stuttgart is so carefully directed that the reality of the human relationships stands out in bold relief.  The Waldhaus’ seemingly less punitive rules are actually quite chilling as they are so difficult to follow and the stakes are life and freedom.  Lars-Gunnar Lotz is a director to watch as his career develops past this first full-length film.