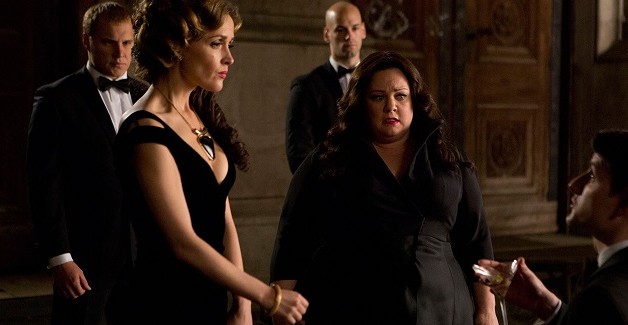 And finding these gems amid the dreck can also provide constant reminders about just how terribly Hollywood fails in certain genres in modern times.

And it’s not a matter of opinion: They are literally lacking in basic comedic tenets.

Many modern-day so-called comedies tend to rely instead on unfiltered, untimed, unoriginal and repetitive coarseness, crudeness, cuss words, shock value, grossness, bathroom humor, uninspired and shock-value violence, increasing attempts to shock and awe through gross acts, unlikeable characters, one-joke stories, thin storylines, unfunny characters, and a weird, awkward reliance on trying to meld comedic jokes and situations with real life, reality and realism. Which, of course, doesn’t ever work—because the best comedy takes the viewer completely out of real life, reality and realism and instead creates a fantasy comedy world where comedy exists on some other lovable, likeable, oddball realm where the outrageous and crazy and goofy and loony—and funny—can occur in its own world, apart from the unfiltered and openly raw rudeness, crudeness, coarseness and in-your-face straightforward violence of the real world.

It’s as if many modern-day filmmakers have completely forgotten the lessons to be learned from prior classic comedies—such as the films listed above, along with, again, hundreds of others. It’s as if many newer filmmakers think the only way they can create a good new comedy is to eliminate the fantasy comedy world and try to meld jokes and humor to the shocking, frightening, grossness and directness of certain aspects of real life. Time and time again, though, this method simply doesn’t work.

And it doesn’t work at all, on most levels, with “Spy,” a terribly average, and barely average, comedy starring Melissa McCarthy as a U.S. Central Intelligence Agency (CIA) office-bound agent who ventures out into the field to foil a terrorist plot involving a rogue nuclear device that’s fallen into criminal hands. The film, like so many modern-day comedies, tries so hard to merge the comedy with a mainstream real-life base, tries so hard to shock with violence and coarseness, tries so hard to summon laughs with cuss words, wrenching violence and crudity, and tries so hard to get laughs out of simple jokes, situations, characters and plots, it all crumbles apart into nothingness before you can say “Top Secret,” “Spy Hard,” “Spies Like Us,” “Casino Royale” (the 1960s original), Austin Powers and other spy spoofs that also terribly failed.

“Spy” has a few laughs here and there, the film has a gloss and sheen to its production values due to an obvious bloated budget, has a few big-name actors (Jason Statham, Jude Law, Rose Byrne, Bobby Cannavale, Allison Janney) trying their best to be constantly funny amid the over-produced mayhem and mind-numbing violence and cussing, Paul Feig (“Bridesmaids”) as director, and a bunch of big-budget toys to draw viewers in: exotic overseas locales and sets, beautiful women, fancy clothes, shiny new sports cars, helicopters, explosions, fist fights, attempts to parody spy and espionage films, and a standard espionage plot that plays off underlying real-life fears about terrorism, terrorist attacks and wayward nuclear devices, explosions and disasters.

But the parts do not, in the end, add up to a worthy whole. After the tenth, or, seemingly, twentieth, excruciatingly unbearable and uncomfortable—and unenjoyable–bone-crushing and head-splitting fist fight, stabbing, car crash, groin kick, limb-breaking, explosion or impalement, the violence takes just about everything away from the comedy. The fish-out-of-water central plot device of the office-bound McCarthy character, Susan Cooper, suddenly becoming an undercover, chasing, fighting, conspiracy-uncovering, tough-and-rumble field agent or operative is clichéd soon into the film, and, through no fault of McCarthy’s comedic skills, the viewer somehow can never buy into the transformation of Cooper from office-bound analyst to James Bond-ish field agent—it’s too sudden, too glaring, too quick, and the situations that Cooper confront are just too outrageous for a sudden transplant to handle—even in the suspension-of-disbelief confines of a comedy and, yes, even within a fantasy comedy world. It’s just not believable, even under the attempted comedic premise.

The writing, plot and subplots are not original or inventive—it’s the same spy tale told in previous spoofs and in previous straight-on spy films and franchises: terrorists hijack a rogue nuclear device, plot to use it for widespread destruction and big payoffs, and various terrorist, criminal and gang elements are fighting each other, and the CIA, for control of the nuclear device. Cooper finds herself in the middle of all of this, with the help of her CIA colleagues, but, again, it’s all predictable, cookie-cutter and formulaic.

Paul Feig’s writing relies so much on coarseness and crudeness, there’s nothing much left in the end—nothing intelligent, deep or in-depth, no messages or themes to ponder, just nothing beneath the coarseness. And his direction is by the book for these modern-day comedies—too much reliance on crude humor, little or no subtlety, frentic editing, awkward pacing and timing, and, too often, crude and nasty jokes that fall flat. There’s even one of those embarrassing celebrity cameos, which has nothing to do with the plot, adds nothing, advances nothing, and just seems to be there for the simple inclusion of someone famous. There’s an attempt at redemption, by having Cooper prove herself to macho, sexist, biased or snooty other agents and bosses, but even that is handled somewhat lamely and underhanded. It’s as if the entire exercise was tired from the start, but everyone decided to proceed forward anyway.

Melissa McCarthy is indeed a funny woman, and she does indeed have comedic sensibilities, but they are just wasted in “Spy.” Like the current situation with Dwayne Johnson, who is another talented, funny and personable actor, Hollywood filmmakers just can’t seem to find a quality film for Melissa McCarthy. Because, definitely, “Tammy,” “The Heat” and “Identity Thief” certainly are not those quality films. Someone, somewhere, needs to write and direct McCarthy and Johnson in a decent film that really, truly showcases their inherent dramatic and comedic talents.

In “Spy,” Jason Statham, Jude Law, Rose Byrne, Bobby Cannavale and Allison Janney all have good screen presence, are talented performers, they show some comedic qualities, and they try their best, as noted, but the overall average writing and direction from Feig can’t save them here.

Additionally, Hollywood filmmakers—for several decades now—just cannot seem to make a quality spy, or espionage, spoof. Scores of failed espionage parodies litter film catalogues through the decades. Rarely are they funny, and rarely are they clever. The world is still waiting for a real, high-quality, inventive espionage spoof. (Some would argue that the James Coburn “Flint” films are quality spoofs, and they do succeed on a certain level, but even those two films are not side-splitting, laugh-out-loud comedic espionage spoofs for the ages.)

“Spy” ends just as you thought it would, and if you were expecting a clever twist or turn, your expectations were far too high. The film ends up being just another average comedy among many recent average Hollywood comedies. “Spy” ends with a character lost in a body of water, with no way out. That’s how filmgoers will feel after watching “Spy:” lost, adrift, wondering whatever became of the great Hollywood comedy film.

It’s enough to steer filmgoers back to cable television, to continue the quest, the search, for those lost comedy gems.