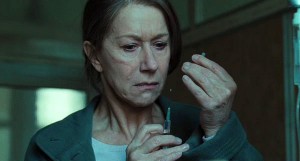 This film was produced in 2010, and although seen at the Toronto International Film Festival and the Washington DC Jewish Film Festival, is now to be released August 31, 2011. This spy thriller, set in the late 1990s, is the story of three retired Mossad agents who are forced to revisit their 1966 experience of arresting “the Surgeon of Birkenau,” and to bring him to trial. (The surgeon is seemingly based on “The Angel of Death”, Josef Mengele, who had carried out horrible medical experimentation, and as a gynecologist he experimented primarily on women and children—blinding children to change their eye color, for example).

The Debt was directed by John Madden and the three Israeli agents were played by Helen Mirren as Rachel Singer, Ciaran Hinds as David, and Tom Wilkinson as Stefan Gold. Jesper Christensen played Dieter Vogel, the Nazi doctor. Flashbacks play an essential role in this film with Jessica Chastain playing the young Rachel Singer, Marton Csokas as Stefan and Sam Worthington as the young David. (If this is confusing, it was also confusing in the film.) Only Jessica Chastain believably foreshadowed and blended with the older woman played by Mirren.

A week or so ago, one of my daughters asked me if I remembered when the Berlin Wall was erected. I told her I remembered when it was built and when it was torn down. My Father was an Army doctor in Europe in WWII and as a young child, I followed every scrap of news and every newsreel. I added that I had once dated a pilot who flew the Berlin airlift. It was an odd moment for both of us. Later I came to know a number of people who had been in concentration camps or who fled the Nazis.

My point is, I knew these times and such people and they were all marked by their experiences to such an extent that though brave, they never recovered and continually fought darkness, cynicism, and a sense of inevitable tragedy. And despite the inherent drama of this film and the strength of an outstanding brilliant director, and the presence of very talented actors, including the incomparable Helen Mirren, the film was more focused on the twists and turns of plot than conveying a sense of the times or its particular horrors. This is more a story of the impact of one bad decision than that of the impossibility of living their lives intact. There were shocking scenes as when the young woman agent visits the doctor as a patient.

The characters, however, did not carry the sense of extinguished lives that I found so characteristic of the times. And the crisis that they face presents a crisis, but one that paled compared to the challenges this trio had faced down. Protecting the innocent from the irreconcilable horrors and truth of the past seems a luxury. Only Mirren as Rachel conveyed the continual sense of danger and anxiety that might be expected from her history. One man seemed disturbed throughout and eventually ran away and then returned to a tragic end while the other sought to protect his reputation and his career. Almost from the first moment there were scenes and choices that puzzled me. Rachel Singer is first seen listening to her daughter talk about the book she has written about her mother’s service as a Mossad agent. We see clearly the mother’s face bears a square scar and one inevitably watches during the film to see how her face was injured. The scar was too visible, there were excellent plastic surgeons then and surely such a woman would have sought treatment for it. There is a saying that if there is “too much blood” the play or movie loses a tragic sense. This one had “too dramatic a scar.”

On the plus side, the music by Thomas Newman beautifully supported and amplified the story of the film. The last act of the film has its own chilling moments with an outstanding performance by Helen Mirren. The Debt, as it is measured in the film, is paid, but the ending is almost too simple. If you compare this film against the extraordinary 2006 Florian Henchel von Donnersmarck film, “The Lives of Others,” set in the same era, The Debt appears strangely lacking in depth and emotional impact.