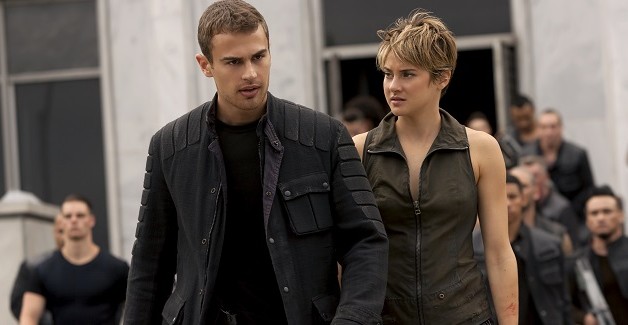 The first big movie surprise of the year is “The Divergent Series: Insurgent,” which pulls a sly, crafty and confident “Empire Strikes Back” move and defiantly overcomes most of the glaring, sometimes embarrassing deficiencies in its predecessor from last year, “Divergent.” “Insurgent,” seemingly out of nowhere, abruptly improves upon its predecessor in all filmic areas; propels the layered stories, plots, subplots characters forward in more of an adult, intelligent and mature manner; and actually rises above most of the clichéd, stereotypical and cookie-cutter anguished teen-angst sci-fi, fantasy and horror muck and grime to actually stand strong as a taut, tight, suspenseful, action-packed– but in a good way–well-acted, strongly-directed and visually stunning—again, in a good way that actually meshes with the story—and mature science-fiction film.

“Insurgent” is actually worth seeing this mid-March, non-holiday, first-weekend-of-spring (technically) weekend (the film opens nationwide on Friday, March 20)—and that’s saying a lot, considering the depressing wasteland that is filled to capacity with these types of teen-angst genre films. Yet, somehow, everything seems to gel, to work, to please, to entertain, to, again, rise above, with “Insurgent”—so much so, viewers will quickly forget “Divergent,” which indeed suffered from everything that “Insurgent” fixes. “Divergent,” alas, was filled with clichés, stereotypes, mediocre to weak acting, weak direction, horribly stilted and formulaic dialogue, and visual effects that didn’t quite cut it in relation to the larger film at hand.
“Insurgent” improves so much on “Divergent” it’s startlingly and astonishingly to see the improvement within just a year’s time from the last film’s release to this film’s release.

The change from a big average film to an above-average film seems to suggest that director Robert Schwentke (“Red,” “Tattoo,” “The Time Traveler’s Wife,” “R.I.P.D.”) secluded himself in a private screening room deep in some out-of-the-way resort or private residence and watched worthy second-in-the-series sequels “The Empire Strikes Back” and “Terminator 2: Judgment Day” and “The Godfather: Part II” and took notebooks full of studied, detailed notes. That’s not saying “Insurgent” is necessarily as great a film as these three films, but it is saying that “Insurgent” is a worthy sequel that stands on its own and is a quality film.

And, again, in this particular instance, “Insurgent” is a better film that not only provides an entertaining night at the movies, but also actually stokes viewers interest again in this story, and actually makes you interested, curious and enthused about just what happens in the next two films in the series. Yes, there are two more films planned in the “Divergent” series. However, where a year ago that was a somewhat depressing notion, now, with the quality of “Insurgent,” viewers will be re-energized in the series, and the prospect of two more films in the franchise, well, actually looks a bit brighter.

“Divergent” and “Insurgent,” for those not familiar with Veronica Roth’s book series that the films are based upon, are, yes, teen-oriented sci-fi and fantasy post-apocalypse films with teens and twentysomethings dealing with the drama and trauma of not just a post-apocalyptic world and everything that comes with that, but with normal teen angst, teen romance and additional elements of sci-fi and fantasy storytelling that, yes, mirror the “Twilight” series, the “Hunger Games” series, the “Harry Potter” series and probably several dozen other similar series that the mind does not wish to recall at this moment.

However, Roth invented a novel twist that was quite intriguing and original: In this post-apocalyptic world, people have been divided into various, odd factions of society, each with their own unique, somewhat-bizarro (to our view, but not in the view of many of the invented world’s citizens, of course) set of ideals, beliefs, tenets, morals, rules, regulations and guidelines to living, life, relationships—and citizenship. Each faction lives in their own little world, but all live an unstable, unsteady existence, with political, sociological, cultural and mystical differences that separate the factions in, ultimately, unhealthy, scary and tense ways. Of course, there are, well divergents, who don’t quite fit in with any faction, and insurgents, who, well, are insurgent and fight the increasingly crazy and psychotic power structure of the factions.

With not-so-subtle names like Erudite, Amity, Candor, Divergent, Dauntless and Factionless, it’s quite obvious that the factions are symbolic and representative of myriad real-life political, cultural, geographic, sociological, racial, gender and nationality nations, states, groups, organizations and political parties. The mind could have a field day just by watching the movies and matching the various oddball, weird and psychotic leaders of the factions to real-life group and organization leaders, activists, celebrities, politicians, corporate bosses, criminals, dictators and talking heads. Roth doesn’t skimp on the easy-to-read messages, but, again, with the improved quality of “Insurgent” and its story’s various political power plays, machinations, deceptions, double crosses, mind games, war games and diabolical twists and turns, the messages come across not as broad and obvious, but actually indicative of important messages about the very real dangers of power, absolute power, mind-control, brainwashing, submissiveness, lack of freedom and dictatorships.

“Insurgent” follows a heroic group of Divergent rebels—good rebels, it should be noted—who have broken free of the faction system, are out on the run, are being pursued, and are trying to figure out just why they are being pursued so intensely and so crazily by the increasingly crazy and secluded Erudite leader Jeanine Matthews. This time around, Jeanine is portrayed by a better, more wicked and somewhat terrifying Kate Winslet, in an improvement on her “Divergent” performance and turning in a solid performance as a scary, power-mad, diabolical dictator. The heroes are also trying to find out how they can free this world from this nutball faction system and the increasingly unstable leadership of the cold-hearted Jeanine.

Tris (Shailene Woodley), Tobias, or Four (Theo James), Peter (Miles Teller) and Caleb (Ansel Elgort) are not only on the run and out to save the world, but each are facing their own internal questions about their own actions, about whether to remain as rebels or to join the factions (simple decisions that mirror multiple aspects of everyday life and society and are great analogies to ponder, also), and how they should deal with, yes, again, an interesting and improved set of plot points that keep coming and piling up—indications of an improved script, an improved story and a more intelligent story that adds depth through several underlying subplots that you actually have to think about and follow on an intelligent level.

These various conflicts and decisions, too, provide a deeper, more adult aspect to the story, overall, and thus, to the film overall as well. It’s much more than simple teen romance, teen angst and dealing with a ruined, crumbled, post-apocalyptic world. They are dealing with an increasingly dangerous, warring, violent, broken-down and scarily, intensely frightening world that they feel they can fix and that they must fix.

That’s a world of weariness for some youngsters to have to deal with, but that forced heroism and dedication to fixing and saving the world gives the story and film some depth and heft and strength. Tris, Tobias, Peter and Caleb learn that they have to grow up a little bit, that there’s more to the world than simple romance, that they have a definite purpose, that they are out there fighting and running for a very real purpose, and they have to put themselves on the line and in danger and risk their lives for the greater good.

That’s real depth, and real intelligence, and the young actors in “Insurgent” smartly rise to the occasion. Their acting, across all actors and characters, is strong from start to finish. It’s such a marked, stark improvement in one year’s time, it’s slightly amazing. Woodley, James, Teller and Elgort, who carry most of the story and the film, all rise above their performances in “Divergent,” show more of a range, are more in control, show a wider range of emotions, are stronger people and actors in general, and even display some strong, real, deep chemistry that was lacking in the first film. The actors are just better on every level, and it’s great to observe, and entertaining to watch.

Credit must go to director Schwentke and screenwriters Brian Duffield, Akiva Goldsman and Mark Bomback, as well as the posse of producers credited to the film.

Along their travels in “Insurgent,” Tris, Tobias, Peter and Caleb—who are the film’s heroes—meet with, fight with, scheme with and against, and deceive several of this oddball world’s factions, including Erudite—the militaristic, tough-guy, hawish group which is bent on power and control to the point of danger; Candor, the truthseekers who value, well, candor and truth above everything; Factionless, fellow rebels who are battling everyone, it seems; and Amity, the peace-and-love hippie and granola and tree-hugging nature and earth lovers who just want to be left alone to work the fields and live in simple peace, love and harmony.

And, for a welcome rare instance, the film is strengthened by, supported by and enhanced by sustained and frequent stunning and arresting state-of-the-art visual and special effects that actually compliment, assist and align smartly with the story. That statement, of course, cannot be said with confidence most of the time during the last twenty years. Far too often, computer and digital effects have evolved so quickly and cleanly and amazingly, often the effects are over-done, too smoothly done, done too often or just done in such a head-banging, loud, and obvious manner, all the viewer thinks is, “Oh, they’re showing us more special effects. Great. What on earth does this have to do with story, plot, characterization, acting writing or character and story development?” Often, the sad answer is: nothing.

However, “Insurgent’s” special effects—the work of numerous visual effects supervisors and coordinators and literally hundreds of computer, digital, matte and artistic visual and special effects artists—directly and smartly compliments the story. The story, often, is the visual effects—for reasons that won’t be fully explained here, because the explanations will give away vital plot elements. But it can be said with confidence that numerous sequences in “Insurgent” that involve visually stunning visual effects connect straight to the plot, the story and the characters, and the overall result is one of enjoyment and satisfaction.

Even the ending of “Insurgent” is a stunner—leading the viewer and, now, fan of the series to laugh, gasp—and look forward with excitement to the next installment.