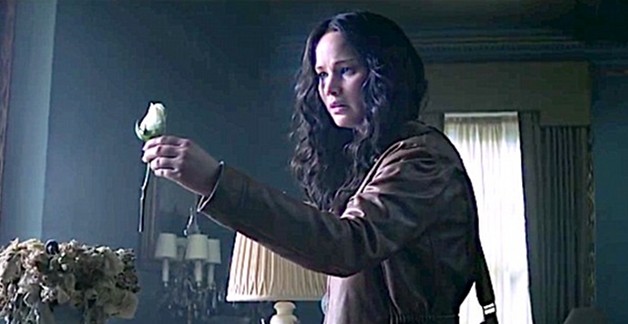 THE HUNGER GAMES: MOCKINGJAY—PART I

The entire teen-angst-science-fiction-fantasy thing during the last fifteen years has not only run its course, but the sub-genre ran and finished its course, exhausted and out of air and life, about ten years ago, about the time of the third “Harry Potter” film.  As mediocre, uninspired, unoriginal and just plain boring film after film after film in this tired genre has shown, pretty faces, cute kids and truckloads of state-of-the-art visual, special and computer effects do not make great films—and there’s only so many ways you can tell the same teen-angst story with a fantasy, science fiction or horror background before all the teen-angst overwhelms everything, all the stories and films meld into each other, and you just want to stand up and shout, “Grow up, already!  Take a part in a stage version of ‘Equus,’ already!”

The barrage of mediocre or, at times, below-average “Harry Potter,” “Twilight” and “Hunger Games” films, and others in the genre—most of them forgettable—have cluttered the cineplexes for more than a decade now, adding to the long list of recent-era unneeded Hollywood sequels, franchises, re-boots, re-makes and prequels that may have made money for many folks, but added little to the intellectual advancement of the art of filmmaking.

Add the unfortunate, somewhat-forgettable, surprisingly flat and overall disappointing “The Hunger Games: Mockingjay—Part I” to this list of big average films, or average big films.  These average big films are big in the sense that there are huge budgets, stellar production values, A-list casts, loads of marketing and production, plenty of advance hype and buzz and zeitgeist, and pop-culture tie-ins to popular books.  But these films are average in the sense that they generally lack an overall mature, adult, intelligent, inventive and insightful sensibility, and they tend to focus more on the sulky, sultry and tortured life of teens thrown into challenging, dark and scary worlds, situations and societies.  That basic storyline is fine—but it’s what you do with it that counts, and, again, most of these films do not make the most of it, and they tend to coast along smoothly—and with loads of luck—on their name, brand, book tie-ins and hype.

Coasting along based on name recognition alone does not make great films, either.

It’s long past the time to get back to mature, adult dialogue, adult action and adventure, and mature, adult, intelligent movies that can appeal to all audiences—not just teenagers hyped up about books and movies geared toward teens. It is indeed possible to make mature, adult, intelligent—and entertaining—films that can appeal intelligently to people of all ages—including teens.  It’s time to stop the pandering to teens with sub-par films that pounce upon popular books, embrace a lame, somewhat sterile connection to fantasy, science fiction and horror on only shallow levels, and avoid—often, intentionally so—smart, intellectual, in-depth, insightful and analytical dialogue, emotions, interactions, plots, characters and characterizations.

“The Hunger Games: Mockingjay—Part I”—the third in an over-done, over-extended four-film series based on the popular series of science fiction books by writer Suzanne Collins, tries gamely to present itself as some type of epic examination of post-apocalyptic divided societies in a futuristic world, with attempts at comments and analysis on civil war, revolution, hero-making, military propaganda, brainwashing, rebel leadership and the evils of psychotic, power-mad dictators and rulers.  These attempts, good intentions and lofty ambitions are commendable, but just as Christopher Nolan failed with the recent, similarly disappointing, flat and over-done “Interstellar,” any major good intentions are deflated in “Mockingjay” by uninspired, unoriginal, straightforward and by-the-books direction, screenplay, timing, pacing, characters and characterizations.

The script wants so hard to examine these lofty issues and in-depth matters, but the writing, by Danny Strong and Peter Craig, and the direction, by Francis Lawrence, simply don’t have the inspired originality, cleverness, insightfulness and ability to probe larger issues on a major level of introspection.  This film actually needed a better scriptwriter, a more clever direction, and less reliance on fancy special effects and stilted, clichéd teenage angst and emotion, and more moments of dialogue, direction and characterization that probed these serious issues on, again, a more mature, adult level.  For too much of the film, there are long moments that are just flat, uninspired, and paced and timed in a manner that completely lacks suspension, action, adventure or excitement—all of which are meant to be portrayed.

The film also suffers from this moronic insistence in Hollywood to drag out these types of books and films into more films than there should be.  “Mockingjay—Part I” should be just “The Hunger Games: Mockingjay,” with no “Part I” and no “Part II.”  The film adaptation of the “Mockingjay” book by Collins should have been just one film, just as the last “Harry Potter” film adaptation of the last book should have been just one film, and, well, arguably, there should only have been one—just one—“Twilight” movie.

Sometimes with these books and films, enough is simply enough.

“Mockingjay—Part I” picks up from the previous “Hunger Games” film, “Catching Fire,” as reluctant, too-sulking, too-angsty, non-eloquent, non-well-spoken and awkwardly-named heroine Katniss Everdeen (Collins has a tendency to give her characters oddball, smirk-inducing names that detract from the story) finds herself being solicited to be a rebellion and revolutionary hero, mouthpiece—and propaganda tool—in the militaristic District 13 in Collins’ futuristic nation of Panem.   Everdeen ended the horrific games from the previous films, and now she is engulfed in a civil war led by various factions of rebels, revolutionaries and districts of soldiers fighting the repressive, reactionary regime led by the evil, corrupt and psycho Coriolanus Snow (these names—ugh), ably and spookily played by good-sport veteran Donald Sutherland.

District 13 leader Alma Coin (these names are not jokes, but they do appear to be), ably played by fellow good sport Julianne Moore, looking sexy and svelte in green revolutionary uniforms and long, straight, streaked blonde hair, wants to utilize and capitalize on Everdeen’s zeitgeist popularity in the revolutionary world and use the young girl as a rebel symbol, leader, confidence-builder and, in a real sense, motivational speaker to the rebels.   Coin is aided by her public relations and public affairs adviser Plutarch Heavensbee (research could not find what particular narcotic, stimulant or alcoholic beverage affected Collins to come up with these moronic, goofball character names, which come across as names more suited to a Second City or “Saturday Night Live” parody), ably played by additional good sport Philip Seymour Hoffman in one of his last film roles before his untimely death.  Thanks in part to the talents of Hoffman, which the film world will indeed miss, and Hoffman’s understated portrayal, Heavensbee comes across as one of the film’s few truly likable characters, and Heavensbee thankfully counters Coin’s rougher, more awful militaristic and nationalist tendencies by offering a degree of actual, real human caring, sympathy and emotion.

The somewhat rigid Coin and the likable Heavensbee are aided, in part, by the greatly welcome, more realistic character Haymitch Abernathy (we, alas, are not making up these names, although it would appear that we are indeed making up these names), ably played by fourth good sport Woody Harrelson.  Abernathy provides a welcome bit of rough-edged, down-to-earth, gritty—and very mature and adult—presence, as his character is smart, insightful, helpful and likable, but also a man with his own set of adult problems, mainly recovering from, and working through, alcoholism.  Thanks to the talents and natural presence and acting abilities of Harrelson, Abernathy, like Heavensbee, provides a counter-balance to the teens and their angst, Coin’s rigidness and Snow’s terrifying psychoness.  That’s a nice balance and good point-counterpoint—but, illustrating the film’s general lack of insightfulness or cleverness, there is far too little of Hoffman, Harrelson, Moore and Sutherland and far too little examination of these characters’ motives, background, feelings and emotions played against the larger post-apocalyptic backdrop.  And that is exactly what this film needed—a deeper examination of these adult characters, because these are the real characters that ground, anchor and steer the film—not, alas, the teen characters or the real-life younger actors.

Jennifer Lawrence is beautiful, and she has a presence, and you can sympathize with her “Hunger” character, but in “Mockingjay” she too often seems to be riding on her looks and presence—and little else.  Her performance here is strangely flat, one-note-oriented, with too much sulking and too little expansion into other areas, say, for instance, humor.   And it is all far too focused on her sulking, rage and disappointment at being separated from her one, true love, the captured and brainwashed fellow rebel Peeta Mellark (yes, Peeta Mellark), played by a similarly good-looks-and-presence-blessed youthful Josh Hutcherson.  Yes, that is Everdeen’s situation in “Mockingjay”—Everdeen is indeed upset, confused, saddened and down.  But if the filmmakers are going to present Everdeen as some type of great, reluctant hero of the revolution, then a hero of the revolution has to show, consistently, character traits other than, again, teenage sulky and corny romanticism.  A hero, any hero, in any circumstance, has to be strong, tough, relatable, likable, and, yes, also has to be well-spoken, eloquent, intelligent and even humorous and, well, human.  Lawrence’s portrayal in “Mockingjay” simply lacks good dialogue, lacks in emotional range, and somehow just falls flat.  And you cannot center a film around a character and a portrayal that overall falls flat.

The other young supporting actors try their best to muster up revolutionary and, yes, humorous support, but their performances are all too similarly uninspired, flat and lacking in good dialogue, situations or scenes.  They all look good, and they have a purpose, and they are commendable for fighting the good fight, but they are all in need of something more original, inspired and suspenseful.

There are indeed battle scenes, fight scenes, a daring night raid on a huge, daunting dam that provides much of the power to Snow’s fortress, and a definitely scary bombing raid by Snow’s forces on District 13 that does provide some much-needed suspense and emotion, and is well-executed and well-staged–but these action scenes are too few and too far between, and they are bookended by the other, more flat, lacking scenes that needed that same level of excitement, suspense and pacing.  The overall production design, special effects and production values are indeed all top-level, and the visual effects crews, production design crews and costumers and set designers need to be credited for creating a realistic, impressive futuristic world that does indeed create a true sci-fi world of the future.

Everyone needs to stop and look at the recent science fiction, fantasy and horror films that do succeed on multi-layered levels of intelligence, entertainment, introspection, eloquence, great writing, suspense, great direction, great visual effects that not only dazzle but contribute directly to the story at hand, and overall excellent storytelling:  All of the “Lord of the Rings” films, all of the “Hobbit” films, “Guardians of the Galaxy,” “Zombieland,” “Looper,” and the first two “Potter” films.  Lessons can be learned from watching these films and wisely adapting their techniques.

Meanwhile, Hollywood continues its tired path:  The next film in the “Divergent” series is scheduled to be released in March of  2015.  And, according to Wikipedia:   “On April 11, 2014, Summit Entertainment announced that a two-part film based on the final book in theDivergent trilogy, Allegiant, was scheduled to be released.  The first part, The Divergent Series: Allegiant – Part 1, will be released onMarch 18, 2016 while the second part, The Divergent Series: Allegiant – Part 2, on March 24, 2017.”

And, no, we didn’t make that up and that is not a premise for a “Saturday Night Live” skit, alas.  One can only hope that the producers of the “Divergent” series will have carefully watched the excellent “Lord” and “Hobbit” films and the equally-excellent “Guardians of the Galaxy”—and taken several pages of detailed notes.