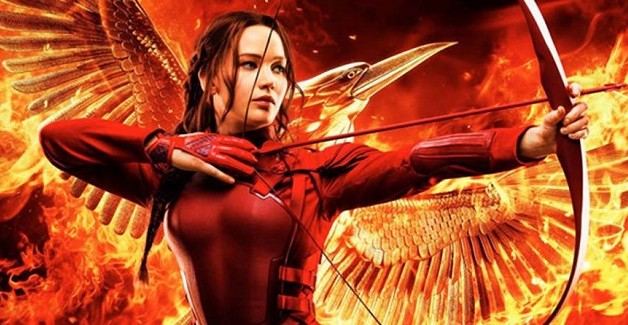 Post Views [post_view]
“The Hunger Games: Mockingjay Part 2” ends the four-film series based on writer Suzanne Collins’ “Hunger Games” trilogy of books as an average-to-good film—not great by any means, but not terrible, which it could have been, either—but that status is marred somewhat by the faltering, shaky, unclear and disjointed third act, which abruptly alters the entire cadence, pacing, mood and atmosphere that the film worked so hard to achieve in the first and second acts. Thus, the film could leave die-hard and non-die-hard fans disappointed, as that third act is decidedly anti-climactic, a bit of a downer and questionable in terms of its storytelling, plot structure and plot development.

However, it would be unfair to fans to reveal just what plot structures and developments lead to this clunky, wayward third act, as that would indeed spoil the film. It’s not giving anything away to say, though, that even the most die-hard fans will likely leave the theater shaking their heads at the final thirty minutes of the film, wondering just why the filmmakers decided to take this course.

The overall problem with this third act is that the entire film before it concerns a coordinated, well-planned, well-structured war game with a sole focus of a clear victory for heroic rebels fighting a war, and with that in place, viewers naturally expect a huge, celebratory war victory payoff on several levels at the end. After all, that victory is what the entire film is about and leading up to—but the way that this conclusion and pay-off is presented, written and filmed is so off-kilter and disappointing—and, again, mainly anti-climactic—the ending is simply perfunctory and presentable, but not as great, grand, satisfying and celebratory as it could have been. The disappointing third act brings down the film, brings down the film franchise, and even brings down the entire three-novel, four-film story.

This average-to-good, generally over-extended “Mockingjay Part 2” film also proves, yet again, that Hollywood suits and filmmakers desperately, decidedly need to stop this horrendous, moronic practice of stretching out the filmic versions of novels into one more film than is actually needed. There was zero need for Collins’ “Mockingjay” novel to be made into two films. One well-written, well-edited and well-directed film version would have been—and should have been—enough. But stretching out the story into two films—both average-to-good films, but not really great films—simply helped to dilute, soften, dampen and weaken the overall story. “Mockingjay,” simply, should have been just one film, not two films.

The same problem plagued the latter “Harry Potter” films, the “Twilight” franchise and other similar teen-oriented fantasy and science-fiction films. Hollywood, studio and producer greed has overrun, over-saturated and over-done books, stories and films with unnecessary film sequels that simply did not need to be made, should not have been made, and would have worked better in single, solitary, better-made films. Everyone complains, everyone criticizes—even fans—but the studios continue to crank out average-to-good, average and even just-plain-awful sequels, prequels, remakes, reboots and whatnots to the point where they all end up mushed together like some crazy filmic collage clip job.

“Mockingjay Part 2” picks up directly from where 2014’s “The Hunger Games: Mockingjay Part I” left off—with the rugged, well-armed and well-informed rebels in the nation of Panem continuing their steady, dogged fight to overturn the ruthless, cruel, psycho and devious—and hated—President Snow (Donald Sutherland, at his most creepy, snaky and slimy) and his oppressive regime. The rebels, led by the increasingly questionable President Alma Coin (Julianne Moore—also at her most creepy, snaky and slimy), and her trusted advisers Haymitch Abernathy (a steady, reliable, understated and likeable Woody Harrelson) and Plutarch Heavensbee (Philip Seymour Hoffman, also steady, reliable, understated and likeable, in his last film role, alas), have increased their intelligence gathering, surveillance, reconnaissance, arms gathering and even technological abilities, enabling them to steadily advance on Snow’s well-protected, well-armed and dangerously booby-trapped center city, outlying protective areas and inner fortress.

The rebels, also led by in-the-trenches lead soldiers Boggs (Mahershala Ali), Gale Hawthorne (Liam Hemsworth) and Peeta Mellark (Josh Hutcherson) and a battalion of additional brave, courageous, strong and devoted comrades in arms, are accompanied on their missions and operations, figuratively and literally, by what the rebel leadership has deemed to be their mockingjay, or heroic spokesman, guiding light and psychological morale-lifter, public relations face and overall symbol of all they are fighting for—the spunky, tough, fetching—and quite cute—Katniss Everdeen (a much-improved Jennifer Lawrence in this third film, as she gives her best performance here in all of the four “Hunger Games” films). Everdeen, while quite talented with a bow and arrow and quite tough, like any good tragic or semi-tragic war, fantasy and science fiction heroine, is not only a rebel symbol of hope and a tough soldier, but she is also a conflicted character who finds herself in the center of not only a literal war, but a government and politics war, a military and power tug-of-war, a crazed quest for power by those around her, and a public relations battle. Thus, she realizes, through a personal, spiritual and educational journey, that all around her, even in her rebel military world, may not appear to be what is presented to her and her fellow soldiers.

These surprising, twisting and turning plot developments give “Mockingjay Part 2” its story lift, and added depth, and help propel and increase the suspense throughout the film. Along with the rebels’ slow and steady march toward Snow’s evil fortress, Everdeen and her fellow soldiers must also deal with deceit, deception, lies and double-crosses from all sides. Besides giving the soldiers added dramatic tension to somehow get through the outer, booby-trapped areas and inner portions of the city surrounding Snow to eventually get to Snow’s fortress and kill him, these political and military games that are uncovered provide needed spiritual, moral and life growth and lessons for Everdeen and her battalion comrades.

Thus we see the young soldiers come to realize that sometimes, all is not what it seems, those in power cannot always be trusted, there are sometimes ugly, evil and even psycho machinations all around you, no matter where you are, and, often, soldiers and fighters need to dig down deep, trust their basic instincts, find the people who they can really trust and rely on, work closely with those who are really closest to you, and, in the end, of course, do the right thing that is best for everyone in the grand picture of the past, present and future.

In “Mockingjay Part 2,” Evergreen, Boggs, Peeta and Gale and their cohorts learn all of this, and this learning process—and the examination of political, military and power struggles and machinations in the greater context of war and peace—helps lift the film from being simply average. Beneath the teen and twentysomething angst and romance—which is indeed still there in the film—and beneath the action sequences, there are underlying themes focused on trust, love, respect, doing the right thing, and fighting the good fight for the greater good.

However, as admirable as those messages, lessons and themes are as aspects of the film, there’s still that troubling way of presenting them in that troubled third act. The problem is, for most of “Mockingjay Part 2,” the film is an exciting, suspenseful, rousing fantasy and science fiction action war film and thriller, complete with sprawling, well-produced and well-designed sets, costumes, action sequences, stunt work, special effects and fight scenes. They are all presented excellently—the production design, art direction, special effects and stunt work are all consistently above-average throughout the film—and all of these filmic aspects, under the able, increasingly confident direction of Francis Lawrence, combine to present that exciting, suspenseful and enjoyable sci-fi action film.

But that action, suspense and in-the-trenches sci-fi war atmosphere—all set in some post-apocalyptic world that clearly marks the separation of the haves—Snow’s imperial regime—and the have-nots—the citizens and rebels who are oppressed and denied basic freedoms—are suddenly muffled and brought to an abrupt halt during that last act. It’s a mystery just why certain writing, direction and pacing decisions were made for this last part of the film, but whatever the reason, once again, it all doesn’t work to bring the film series to a satisfying conclusion.

The action and stunt sequences in “Mockingjay Part 2” are excellent—and original. Coupled with the excellent special effects work of several effects companies—and hundreds of digital, computer and effects artists–the action and fight scenes explode off the screen, figuratively and literally. And the production design and art direction consistently present sufficiently futuristic, sci-fi settings of bombed-out city blocks, grand abandoned buildings and streets, underground tunnels, imperial lairs where Snow lives, and grungy, toughened battleground camps and outlying rebel strongholds. And the lead actors and hundreds of extras are outfitted in original costumes and weapons that also sufficiently evoke a futuristic landscape battered by years of oppression, war, starvation and difficulty. “Mockingjay Part 2” easily evokes the fantasy and sci-fi world that the story is meant to evoke, and that’s a credit to the overall production.

The actors are sufficient, too, but it’s interesting to note two acting observations in the film. First, as noted, Jennifer Lawrence has improved as an actress from film to film, and due to the storyline and Lawrence’s increasing acting abilities and apparent familiarity and comfort level with the Everdeen role, the Everdeen character also learns, grows and evolves. That growth and transformation, from a youth “plucked,” as Snow notes, from the masses to be a symbol and leader, to an assured, confident, bold and courageous leader of those masses, is interesting to watch. And that transformation—Lawrence’s improved acting and the evolution of Everdeen—also helps to add some depth and quality to the film.

So, finally, another teen and pre-teen oriented series of fantasy and science fiction novels and films comes to an end. While the debate can continue about the overall quality and need of the filmic sequels in the “Harry Potter,” “Twilight,” “Hunger Games” and “Divergent” series, one positive aspect of all these series of books and films—and other similar series—is that millions of youths have headed to their bookstores and libraries (yes, bookstores and libraries) to actually pick up a real book, sit down with it—and read it! And that increase in attention to reading relating to these series can only be applauded. And if reading the books causes readers to head out to movie theaters to see the film versions, or if seeing film versions causes people to read the books, well, the results are victories not only for reading and books—and bookstores and libraries—but for the film industry, also. These trends are also good for the fantasy and science fiction genres of books and films.

However, several huge series have reached their conclusions in recent years. The “Lord of the Rings,” “Hobbit,” “Hunger Games,” “Twilight” and “Harry Potter” book and film series have all ended, and fans are waiting the upcoming, already-completed final installation of the surprisingly good “Divergent” series.

So, yes, bring on the next series of fantasy and science fiction books and films. Anything that gets people up and out and off their couches, gets them to read books, gets them and away from their computers and into libraries, book stores and movie theaters is only a good, positive and productive advancement. For these reasons, “Mockingjay Part 2,” and its various siblings and cousins in books and films, can indeed be applauded.