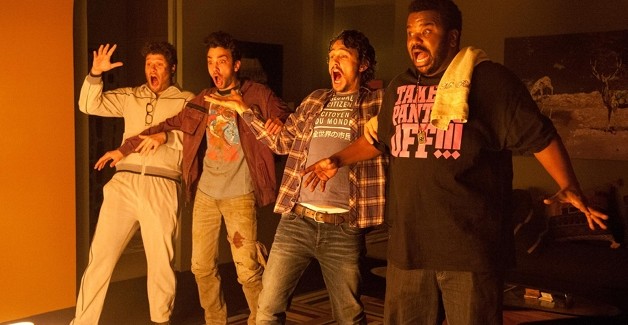 Film Review: THIS IS THE END

We don’t want to see This Is The End for the loosely-cobbled, self-congratulatory vanity project of celeb-actors-playing-celeb-actors that it really is. We readily buy into the frat-boy formula of dystopian dickheads finally finding their inner humanity and, eventually, their way into heaven. The idea of men refusing to act grown-up lures us long enough to make us forget that it is just a longer, souped-up version of Rogen and Goldberg’s co-written original ’07 short Jay and Seth Versus The Apocalypse.

We arrive at the end of the world just a few scenes after this film begins. In this funny R-rated Rapture, Jay Baruchel is down from Canada to visit his now-famous old buddy Seth Rogen. Jay can’t stomach Seth’s new famous friends (James Franco, Jonah Hill, Craig Robinson, and the annoying trespasser, Danny McBride – all playing versions of themselves). But as the last few survivors from Franco’s party, they are forced to be together inside James Franco’s modernist L.A. mansion filled with really bad nouveau art.

There’s an Apatow-style Apocalyptic air about this spoof on both Hollywood and the Bible. Hell-fire and improbable monsters outside. Inside, house guests with funny bones and boners. Sleepover whoopee and male bonding give way to cabin-fever and paranoia. Seth, for example, is scared that the strange beasts lurking beyond the door will “titty-fuck” him. Sophomoric fetishes – stealing snacks, sharting, drinking pee to save water – alternate with ornery spats on rationing and hygiene. Who among you got jizz all over those Penthouse pages? Who will get to eat Franco’s last remaining Milky Way? Who’s the friend you really want to face your last hours on earth with? Who will get sucked up in a beam of light as a saint? Who will get swallowed into the earth as a sinner? (More crucially, will low-tech CGI really do justice to both of those very literally visualized Judgment Day scenarios?)

Textbook twattage (phrase from film) there is aplenty. Jay is feeling slightly insecure, as he is supposed to be the only non-famous person here. The others play outrageous versions of their slumming, entitled actor selves, but we can spot shades of previous roles – Jonah Hill in his annoying-interloper role from Cyrus, Danny McBride in his loutish turn from Pineapple Express. Unfunny inside jokes include making video journals on Franco’s camera from 127 Hours, Hill’s Green Hornet flop, and his Moneyball-Oscar vanity.

We get the usual stoner-dude bad-assery, but the characters are nowhere near as gratifyingly high as Neil Patrick Harris in Harold & Kumar, or James Franco in Pineapple Express (a badly made sequel trailer is even plotted here). The Jay-Seth bromance here isn’t supergood. By which I mean it isn’t quite Superbad, that other slacker movie collaboration by co-writers Seth Rogen and Evan Goldberg, who co-direct for the first time here.

This is an unusual disaster movie in that it is mostly set indoors, except for a few mock-scary scenes of an L.A. crawling with phallic aliens and gaping sinkholes. There are generic horror movie send-ups as well as specific parodies of famous scenes from Ghostbusters, Rosemary’s Baby, and Exorcist. In terms of catastrophic action, it’s not as frenetic or as focused as Tropic Thunder or Hangover, but it probably isn’t meant to be. Most of the scenes give off a happy teamwork improv vibe – they make it pretty obvious they are all trying to wing it. Or (given the base level of grossology involved) wang it.

Nandini Lal is a writer and critic based in Washington, DC.