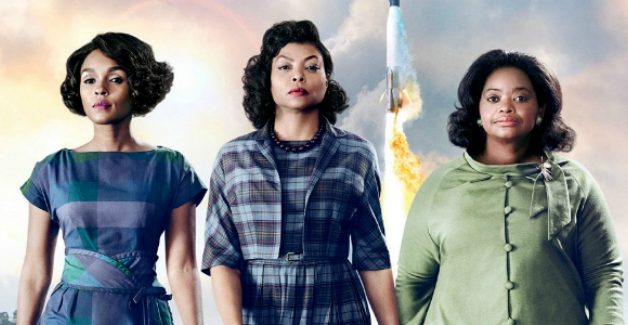 Four excellent films are in out in wide release in theaters this month, January, 2017, for awards season prior to the Academy Awards and post-holiday-season, and all four are worth seeing: “Rogue One: A Star Wars Story,” “Hidden Figures,” “La La Land” and “A Monster Calls.” A fifth film, Martin Scorsese’s misfire, “Silence,” is not recommended.

“Rogue” is a gritty, rousing, heroic sci-fi war film that brings a new atmosphere and aura to the continuing story of the rebels versus the Empire, with realistic, war-story and fast-paced direction and editing; a strong cast of likeable, rogue rebel characters, led by the tough, independent character played by Felicity Jones; and dazzling special, visual and computer effects–on the ground and in space during intense battle and action sequences. “Rogue” continues the successful re-charge of the “Star Wars” series that was started by 2015’s “Star Wars: The Force Awakens.”

“Hidden Figures” is, along with “La La Land,” simply one of the best films of 2016. The film tells the real-life story of three brilliant, pioneering and groundbreaking mathematicians, physicists, computer scientists and engineers–who just happened to be black and female in the early 1960s. These exceptional scientists had to deal with horrible, ignorant, hateful–and down-right stupid–racism, hate and prejudice in the worst ways possible–from scientists, academics, politicians and administrators who were supposed to be enlightened and smart enough to know better. But they persevered, fought for their human, civic and professional rights, fought the racism and stupidity–and proved themselves to be among the most intelligent scientific minds of the era, and their groundbreaking work helped the United States win the space race, get men in orbit around the Earth–and send Americans to the Moon. “Hidden Figures” is an uplifting, rousing, intelligent–and still entertaining–true-story drama that clearly demonstrates just how stupid racism is without preaching–and the film manages to be entertaining and enjoyable, also. Excellent lead acting performances that should be remembered during the upcoming awards season.

“La La Land” is that true cinematic rarity in 2016–an original movie musical, with all-new songs and lyrics, all-new dance numbers and, overall, an all-new book, music and lyrical content for a new movie musical! And besides that novelty, the film is excellent, with beautiful, instantly-memorable new songs, melodies and tunes. Ryan Gosling and the beautiful, captivating Emma Stone singlehandedly carry this film to cinematic musical heights, singing, dancing and acting their hearts and souls out in two more acting achievements that should be remembered at awards season. The film’s new, original songs are winners, everyone of them is strong, and there are dazzling, show-stopping, dream-like, fantasy-like production numbers that recall classic song-and-dance movie musicals–but also remain firmly grounded in modern-day 2016. The film is not sentimental or tacky, and the script, direction and story wisely avoid these sometimes pitfalls of musicals. Instead, “La La Land” makes a defiant statement that there can indeed be a modern movie musical, with strong song and dance sequences, but the story and characters can also strongly co-exist in modern times. If only there were more modern movie musicals like “La La Land.” The director, songwriters, lyricists, actors and art, production and scenic designs, choreographers, costumerers all deserve kudos for this wondrous escapist–and realistic–movie musical.

“A Monster Calls” is a deep, dark, somber yet ultimately enlightening, introspective, emotional, moving and intelligent dramatic-fantasy reflection on nothing less than family, relationships, love, death, grief—and life itself. Young Scottish actor Lewis MacDougall, who is 14 now but was 12 or 13 during filming, delivers a standout, impressive, controlled and emotional performance in the lead role as Conor O’Malley, a 12-year-old boy who’s facing various difficult challenges in life, the worst of which is that his mother is fighting terminal cancer. MacGougall steals the film in a moving, emotional performance that will have filmgoers reaching for the tissues, but also respecting the performance for its emotional and acting range. Liam Neeson also delivers a strong performance as a tree-monster who appears at night to Conor to teach the boy valuable life lessons in unpredictable, puzzling ways that ultimately lead to a wise, insightful path to education and discovery about life’s deepest and most emotional and important lessons. Although “A Monster Calls” is really a mature, adult film for mature teens and adults who know going in that this is a serious dramatic film with fantasy and supernatural elements that bolster and support the drama, the film does deliver important messages, themes and lessons about the most important elements of life. In the end, despite the serious emotions and dramatic elements displayed in the film, moviegoers will realize just how the intelligent and important “A Monster Calls” is. Felicity Jones, Toby Kebbell and Sigourney Weaver also deliver strong lead performances. The movie is based on the popular book by Patrick Ness, and Ness wrote the smart, insightful screenplay.

Even the best directors and writers can deliver a huge misfire occasionally, of course, and, alas, Martin Scorsese’s slog through religious ideals and ideas in 1600s Japan in “Silence” misfires big-time. “Silence,” the tale of two young Portrugese Christian priests (Andrew Garfield and Adam Driver) who travel to Japan in the 1600s discreetly to find and possibly rescue a fellow Christian priest (Liam Neeson), gets bogged down by numerous afflictions that make the film difficult to watch, difficult to care about, and, ultimately, difficult to sit through. The film is far too long at more than two-and-half-hours; suffers from a heavyhanded, overly-preachy, nearly humorless script that is scattered and distorted and overly-talkly to the point of being simply boring; suffers from mind-numbingly slowly-paced direction that seems to lack energy and excitement through much of the movie; is overly, gut-wrenchingly, sickeningly violent, disturbing and unpleasant, with disgusting, wholly unnecessary scenes of torture, death, decapitation, imprisonment, more torture, beatings, psychological torture, and just general ugliness and gruesomeness that, despite its intended purposes of showing various points, end up simply making the film unwatchable and unlikeable. The overall general pacing, timing, story, script, editing and direction all appear to be generally scattered, distorted, wandering, depressing, slow, overly-preachy and stilted. The film has buried good intentions that appear to be aspire to reflect on religion, faith, dedication and redemption, but the general slowness, confusion, ugliness and over-preaching ultimately bring down “Silence” to the point that the movie cannot be recommended.

Moviegoers this month—January, 2017, instead should focus on the other big awards-season films out in the theaters: “Rogue One: A Star Wars Story,” “Hidden Figures,” “La La Land” and “A Monster Calls.” For those who have not yet seen these movies, this particular group of films represents a great way to start off the moviegoing year in 2017.