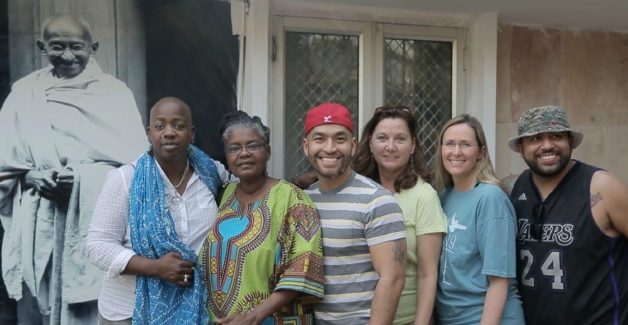 FROM INDIA WITH LOVE

FROM INDIA WITH LOVE

I sat in a theater in Washington, DC and watched the documentary film From India with Love, produced and directed by Mandar Apte. This film is beautiful and is about understanding violence and finding a way to help people break out of traumatizing patterns though love, intense self-acceptance and an extraordinary trip in March 2016 with a very special guide. Washington vibrates with reports of violence on its streets and around the world and it sometimes seems that peace and calm are impossible.

Apte hoped that a visit to India, a place where the concept of nonviolence has deep significance, would help individuals deeply affected by violence. I thought the film was about healing, a deeper and more global process, and one that can take place in a number of ways and in ordinary places. This is about people who have been affected by violence and unless you can make the case that this injury starts a cycle of violence, it is not as much about stopping violence as it is about the victim of violence.  Here, and with one exception, it is not about the offender. Jason Quezada, who was wronged against as a fourteen year old and placed in prison, a place to learn more about being violent, and even given his declaration that previously he wanted to hurt people as he had been hurt, has already begun looking for a new way of life. But no argument, the film is provocative, uplifting and you definitely want Apte’s premise to work. And it offers insights into how we can heal ourselves and others.

The film is only one step up from a home movie. Four photographers shot 50 hours of film. Apte then worked with a number of editors to organize the story. The artlessness is part of the appeal. He appealed on Facebook for people who would undertake this journey. He chose six people who wished to change their lives. They are all appealing. In one way or another, each volunteer was committed to better and safer lives for all our children.

Scarlett Lewis’s son Jesse had been shot in the Sandy Hook elementary school massacre. Linda Couch had joined the group to support her friend Scarlett. Linda had suffered heart failure during her first pregnancy and had received a heart transplant and although she was not a victim of gun violence, she is deeply aware of how fragile life can be and is a spokesperson for the American Heart Association. Jason Quezada had been wrongly convicted of a crime at 14 and after his release from prison, he joined a gang in LA. He had achieved enough self-awareness to know he had more work to do and was committed to nonviolence. Ashara Ekundayo is a parent and is a passionate advocate for creative community development. Angela Wellman is a musician and active creative community programs in California. She founded the Oakland Public Conservatory of Music. She sings beautifully and spontaneously during the film. Both Ekundayo and Wellman are active in Black Lives Matter. The son of Cambodian genocide survivors, Dr. Sonn Sam, is an educator in a New Jersey high school where he confronts youth violence on a daily basis. He wanted to go to India because it was the homeland of Gautama Buddha and Mahatma Gandhi. He is concerned for the future of his bi-racial children.

Apte lovingly takes his pilgrims to markets, the Taj Mahal, the World Culture Festival where 3.5 million gathered to dance and celebrate, and to the banks of the Ganges and to where touches the Himalayas. They meditate and do yoga everyday. They meet with gurus. As pictured it would change anyone.

Apte is dedicated to nonviolence, a man who chooses to be modest and to put the spotlight on the change he evokes rather than himself. He was formerly at The Shell Oil Company where he led the Game Changer employee program. He teaches meditation. He has continued to lead tours and perhaps the ones where he guides police and officials to India may be closer to his goal of answering violence with nonviolence. It seems certain our jails and prisons are often fueling violence. He has also created an organization, From India with Love, to encourage this approach.

The message of the film—love is more powerful than violence– seems naïve, but actually is profound and points to ways to create “India” in your daily life. Seeing the film helped me see contemporary events, the Women’s March, the One Love Manchester concert after the terrorist attack, and all the countless voluntary organizations that keep us connected with each other, as healing forces. There is no argument with the idea that peace and nonviolence has to begin with each of us. This would be a great film to start a serious discussion of what promotes and what stops violence and how to help those who suffer from its effects. We certainly need it.