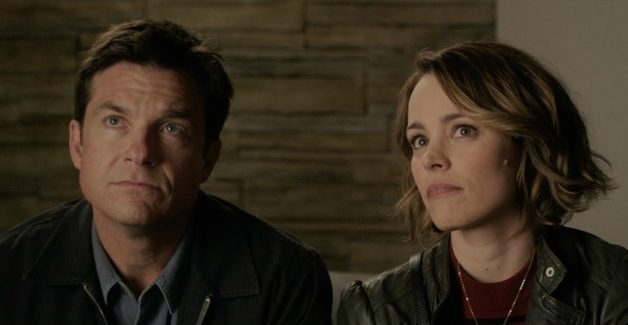 Jason Bateman and Rachel McAdams are funny as the leads of an exceptional ensemble cast–which includes an equally hilarious stand-out performance from Jesse Plemons–who find themselves caught up in a mix of game night games, game night murder mystery–and possibly real-life murder mystery. One major aspect that separates “Game Night” from other modern-day dark comedies in recent years is–quite simply–that the movie is consistently funny. It’s that simple sometimes. “The Disaster Artist” also succeeded at this on a high-level, but other comedies in recent years have strangely lacked laughs, originality and cleverness on a consistent level. Or, some comedies have just seemingly tried to be as gross and outrageous and button-pushing and boundary-stretching as they could be–again, at the expense of real laughs and real comedy.

“Game Night” is clever, with an increasing series of plot twists, turns, deceptions and curveballs that makes the film somewhat unpredictable, suspenseful and smart.

After everyone has seen “Black Panther,” it’s nice to know that there’s another fun, quality film in theaters in February and early March of 2018–and, again, this one will simply entertain you and make you laugh!

Additionally, if you’re a board game enthusiast–as many adults are–and if you’re a member of a regular game night group of friends and acquaintances–as many adults–you’ll appreciate the nods and homages and in-jokes and spot-on references to board games, their unique social dynamic aspects, and the entire social and cultural community that exists around board games and game nights. But “Game Night” will also appeal to moviegoers who are not board game enthusiasts–you don’t have to be a board game player to enjoy the movie.

“Game Night” marks yet another acting success for Bateman and McAdams–actors who show that they can be consistently funny in films. Bateman has that type of everyman (that’s meant as a compliment, not a negative and not a back-handed compliment–it’s appealing and positive and good to be relatable as an everyman), guy-next-door (again, a compliment here!), nice guy (compliment!) appeal, presence and style that makes him immediately appealing and, again, relatable. McAdams registers on the same level. And both are attractive, which helps increase their watchability. But their positive, nice guy presences and styles coupled with their good looks don’t put them on a pedestal or make them unrelatable or out-of-reach—because they maintain that down-to-earth personality that people can relate to on a normal level.

The same can be said for “Game Night’s” supporting cast–a group of positive, relatable, funny, good-looking and smart people who, well, you’d just want to spend a night with playing board games!

“Game Night” offers a fun night at the movies during these ugly, bitter, cold months of winter, and it offers a good, fun alternative to “Black Panther.” So roll the dice, make your move, and head on out and see “Game Night.”