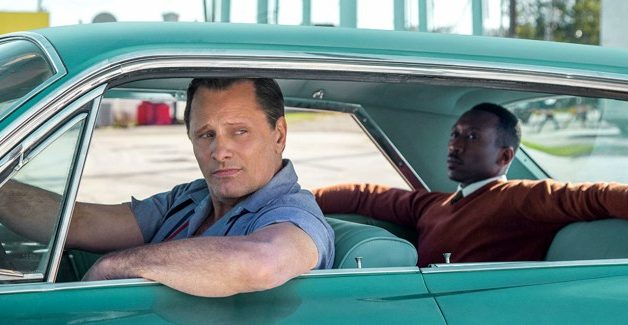 Continuing a most interesting film trend in the latter months of 2018—film biographies based on true stories and real people that are among the best films of 2018—director, co-writer and co-producer Peter Farrelly’s (yes, that Peter Farrelly, but forget that for now) “Green Book” is wholly, thoroughly excellent on every level– emotionally riveting, superbly acted, meticulously produced, intelligently written, and just an instant joy—and instant classic—at the movies.

“Green Book,” again, most interestingly, instantly joins “Boy Erased,” “Bohemian Rhapsody,” “First Man,” “Operation Finale” and “Mary, Queen of Scots” at the top of the list of quality films released so far in 2018–and all five of these films are worthy of award wins and nominations, across all categories.

The story is based on the real-life, true friendship that developed between Tony and famed musician Don Shirley when Tony is hired to drive Shirley on a concert tour–through the still-stupid, still-racist, still-ignorant Deep South of the still-segregationist America in 1962. They encounter violence, racism, threats, jailings, beatings and segregationist policies throughout the South–in 1962. Their journey is a journey of many things on many levels—a journey of self-discovery for both men; a journey of the start of an unexpected, fascinating—and ultimately long-lasting real friendship between two men who could not possibly be further apart in background, class and education; a journey of civil rights and constantly fighting racism, bigotry, prejudice and simply outright civil rights violations; a journey of music, arts and culture; and, simply, a journey of pure human emotion and human nature. To watch these two brilliant actors—Mortensen and Ali—and these two touching, quite proud men somehow reach across boundaries of upbringing, class, environment, race and culture and just simply relate, connect and become friends is just simply joyful, optimistic and uplifting.

Just like in “Boy Erased,” “Bohemian Rhapsody,” “First Man” and “Operation Finale,” “Green Book” shows how men can rise above ignorance, hate, racism, sexism, classism and stupidity and become heroes, friends–and better people. And, really, just what more can one ask for in a story, in a movie? And, in all of these films, the pure joy and enjoyment of the respective films are enriched by the basic fact that all of these stories are based on actual, real, true events and people.

“Green Book” will move you, touch you–and inspire you. Go see this movie.

Viggo Mortensen, as the driver, and Mahershala Ali, as Don Shirley, deliver bravuro, award-worthy performances; Peter Farrelly’s direction is restrained, down-to-earth, touching, emotional, caring–and consistently mature and intelligent; and the exacting, beautifully-re-created period details–buildings, rooms, accessories, props, signs, art, cars, clothes, hair styles, cigarettes, everything–will remind people of the early 1960s; and the overall mood and atmosphere of the film, despite its difficult, dramatic subject matter of racism, rises above the ignorance and becomes an uplifting, optimistic and positive reminder that human nature can overcome ignorance and friendships can prevail across all racial, economic, educational and geographic boundaries.

Among many interesting aspects of the Vallelonga-Shirley concert tour journey through the South in 1962 is that, well, Shirley actually didn’t really need to do this tour. He would have existed and succeeded just fine in New York and the North with his brilliant playing, interpretations, recordings, performances, recitals, private gigs, concert hall concerts and other quite successful music and recording gigs. But Shirley, a quite proud, brave—and courageous—man in real life, wanted to test the waters, push the envelopes, run with scissors—whatever cliched term works—and get out there in the world—the world of the racist U.S. South in the early 1960s—and see what he could prove, accomplish, educate—and maybe change—in those turbulent times. Existing on a reliable, non-risky, ho-hum music gig diet of monied performances was just not enough for Shirley. He wanted to see what he could do through his music, through his appearances, through his risk-taking, to possibly change minds at the start of the civil rights era and an historical period of great change in terms of civil and human rights. Yes, Shirley’s risky Southern tour could very well have resulted in his death—yes, death—incarceration or at the least, serious injuries, but he insisted on going. It helped greatly that he had a connected, tough-guy, macho guy, take-no-crap driver, protector, body guard and, well, fix-it man like Tony Vallelonga along for the ride.

Most likely, without the street-wise, street-tough—and pure New York City/Queens/Northern culture/tough guy/street culture instincts, knowledge and savvy—of Tony, Shirley could have faced far more serious—and possibly fatal—consequences that the incidents that he and Tony did experience. And those incidents were indeed dangerous and even life-threatening. In real life, and in the film, touchingly, Tony comes to realize that he’s there to protect and defend and stand up for Shirley, and he rises to the task heroically several times along the journey. And as the journey progresses, Tony and Shirley start to realize a bit about each other, about each of them breaking out of their own respective shells of existence, and about fighting together for something greater. It’s a masterful story, and Farrelly, the writers, the crew, Mortensen and Ali all work hard together to bring this journey of enlightenment, enrichment and education to the screen in, again, a consistenly entertaining film.

The title of the film refers to the famous green book that was actually published in the racist, segregated South of the United States—in the twentieth century, of all things—and that book was a reference book filled with places that were safe for black travelers to visit, eat and stay at throughout the South.

As with all of the nightmarish, horrendous reality of the racist, backwards, redneck, cracker segregationist United States South, the fact that such a reference book even had to exist for blacks in the twentieth century is shameful, horrific, and one of many reminders in the film of just how backwards this country used to be—and still is today, in 2018.

Along their journey, Shirley and Tony Vallelonga must face all manners of racist, redneck and cracker incidents—crooked cops, illegal rules and policies, illegal jailings, outright beatings and violence, lies, segregated restaurants, segregated hotels and motels, segregated bars, and other ignorant, bigoted elements of the racist South. It’s very simple, and everyone knows it, but it’s never enough or too late or too often to simply note that it’s absolutely unbelievable that one-hundred years after the Civil War—an actual century after that horrible war—the United States was still plagued by outright illegal, criminal racist murders, bombings, shootings, lynchings, violence, jailings and scores of other racist and anti-Semitic crimes against blacks and Jews throughout the U.S. South. Of course, it’s equally unbelievable that nearly sixty years after the events portrayed in the film “Green Book”—the United States is still dealing with these same problems. Unbelievable.

And these stark realities about racism and its attendant violence and criminality provide an underlying theme, moral, message and lesson in “Green Book,” which is, simply, to show the basic ignorance and stupidity of racism, bigotry and prejudice and their connected hate crimes and violence.

In many ways, Shirley and Vallelonga, in the end, do score a decisive—and wondrous—victory over the string of hillbilly, backwards rednecks, crackers and racists that they meet along their journey—as they come out alive, better educated and better people; they expose some horrible crimes in the South; they make some important civil rights points to many people; and, unexpectedly, they create a friendship across all boundaries—a wonderful friendship that lasted from 1962 until both men died within months of each other in 2013! That’s right—Tony Vallelonga and Don Shirley became true, lasting friends, right up until the days that they died. How wonderful is that?

And because that is wonderful, Farrelly and co-writers Nick Vallelonga and Brian Hayes Currie were smart and insightful enough to somehow brilliantly include much humor and lightness in their script, their story and their film. That’s right, despite all of the consternation expressed here about the dark, violent dangers that Shirley and Vallelonga faced in the 1962 South, their story also manages to include many moments of just pure humor—laugh-out-loud humor. Mortensen includes so much humor in his characterization of Vallelonga, it’s simply hilarious to watch him lose himself so deeply in the role, it’s a bit of a brain shock to remember that, hey, you’re actually watching the man who played Aragorn in Peter Jackson’s “Lord of the Rings” films! But, of course, that’s the beauty of Mortensen as Vallelonga—this character could not be farther, or further, apart from Aragorn than, well, Vallelonga is far apart from Shirley. Mortensen is a joy in this film. As is Ali as Shirley. To watch Ali portray the upper-crust, upper-class, monied, well-educated—and culturally and socially and people sheltered—Shirley—a man accustomed to living in a mini palace atop Carnegie Hall, wearing expensive clothes, performing at expensive venues and relaxing on a throne in his fancy apartment—sitting in a car roaring through the South with the Kentucky Fried Chicken and pizza scarfing, foul-mouthed, blunt, to-the-point, somewhat violent and type-A blue-collar pure-Italian-from-the-hood connected driver Tony is just enlightening—and, again, hilarious.

To include humor throughout a story that also has dark undertones is brilliant on every writing, acting, producing and directing level—because the humor lifts up the film, makes everyone more human—and provides a needed, fresh-air counterbalance to those darker undertones. And that’s how real life is—there’s humor and light amid the drama and darkness, and to include all ranges of the human condition—including humor—is to provide a wider, more real picture of that condition. And one can’t help but be reminded watching “Green Book” of the similar story—and similar underlying lessons about people just learning to erase boundaries to just connect and get along—and humorous elements of John Hughes’ “Planes, Trains and Automobiles” two main characters, Steve Martin’s upper class, monied, educated—and socially repressed—ad executive and John Candy’s slobby, sloppy, outspoken, somewhat obnoxious, blue collar shower curtain ring salesman! Although these two films are wildly different, of course, both movies present a touching portrayal of two wildly different grown men learning about themselves, about others, about life—and about what true friendship really means in life.

Peter Farrelly, Viggo Mortensen, Mahershala Ali, Nick Vallelonga, Brian Hayes Currie and the rest of the cast and crew of “Green Book” are to be applauded for this great movie, but they’re also to be applauded for one other notion. “Green Book” tells a story about a racist country in the United States of 1962, but the movie—in every second—also provides that stark, shocking reminder that much of what was a serious problem in the 1962 U.S. South is still very much a serious problem in the 2018 United States—and not just the South. That lesson will stay in viewers’ minds long after the film is over—but so will a lasting feeling of intelligence, insight, importance and enjoyment.

“Green Book” is the perfect feel-good film to see during the holiday season of 2018. Or any season.