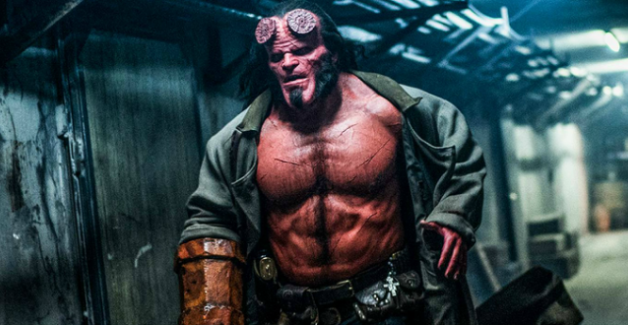 Based on “Hellboy,” by Mike Mignola

“Hellboy,” the 2019 reboot of Mike Mignola’s Dark Horse Comics character and comics series, is a hell of a good time—a gleefully dark, edgy, violent, macabre, spooky and hilariously and intentionally over-the-top and out-of-control mash-up of good old-fashioned gory horror, the supernatural, fantasy, Arthurian legend, superhero and comic book elements and World War II backstory that never really takes itself too seriously, consistently enjoys its R-rated freedom to curse, be as violent as it wants to be, swear and confront genre moviemaking traditions and normal expectations, and ends up being a surprisingly fun popcorn horror-fantasy-sci-fi action-adventure romp at the movies. “Hellboy” is also the type of fun, funny and entertaining R-rated movie that will confound, irritate and confuse stuffy film snobs and elitists—precisely because that’s exactly what the filmmakers want to do.

“Hellboy” revels in its various freedoms and rock-punkish approach to every filmic aspect of the film—its acting, which at times is crazily broad and over-played; its direction, which varies widely from beautiful sophistication with wonderfully and artfully composed, lit, staged, blocked moments to scenes of intentional camp, tackiness and lunacy—and over-the-top violence; its production, which, like its direction, is overall great to look at, full of well-composed and well-shot vistas, and full of state-of-the-art special effects, creatures, monsters, transformations, witches, ghouls, monsters, sorcerers, psychics, giants, towering walking skeletons and hordes of other creepy-crawly monsters; and its writing, which strives to present a multi-layered, plot-filled story, backstory, origin story and interesting characters with often-intended lines of nod-nod-wink-wink satire, parody and inside joking. Those who don’t get it, well, won’t get it, but any fan of pure comic book and superhero horror, fantasy and sci-fi will understand and appreciate what writer Andrew Cosby, director Neil Marshall, and the army of producers, including veteran Lawrence Gordon, are doing here—which is simply present a fun, funny and entertaining popcorn movie.

“Hellboy” tells the quite interesting, original and inventive story of the self-titled main character, Hellboy, or, as he’s really known, Anung Un Rama, who has a most unique backstory—he is literally a spawn of Satan, raised from the depths of hell by none other than evil, crazed Nazis conducting absurd occult experiments during World War II. Yes, really. It’s not clear what Hellboy creator Mike Mignola was ingesting when he came up with that basic origin story, but it must be something inspiring. Anung is half-human and half-demon/spawn of Satan—and yet, he’s a good human-demon, working not as a disciple of the Devil, but actually working against the Devil, for humankind, and as a somewhat questioning, cynical, sarcastic, joke-cracking, hard-drinking, rough-and-tumble rebel agent for what sounds like the most enjoyable federal government agency of all time, the Bureau for Paranormal Research and Defense (BPRD). Yes, really. And Hellboy works and lives with his brilliant, highly-intelligent, classy, stylish and bookish adoptive father, mentor, leader, teacher and guidance counselor, Trevor Bruttenholm—who is also the founder of BPRD. And while he’s constantly fighting various actual demons for BPRD, Hellboy also constantly fights his own inner demons, questioning who he really is, where he’s from, what he’s doing, why he’s doing it, and what his destiny truly is. Yes, really. If this all sounds crazily, hilariously, wonderfully outrageous, that’s good, because the fact that all of this is so outrageously outrageous is what makes Hellboy the character, the origin story—and this 2019 movie version—so entertaining. Since “Hellboy” is rooted in such a crazed, multi-layered back story and origin story of depth, complexity and originality, the rest of the modern-day story emanates from that basic story and finds plenty of room to spread, elaborate and just plain have fun.

In this 2019 version of “Hellboy,” Anung and Trevor, aided by the beautiful, lovely, sexy and well-meaning psychic and seer Alice Monaghan, discover that evil forces in the modern-day world are conspiring to bring back to life the long-buried evil Queen of the Underworld, Nimue, also known as the Blood Queen. It seems that more than a thousand years ago, Nimue/The Blood Queen/The Queen of the Underworld was sliced to pieces and her various body parts—including a wonderfully visual decapitated and talking head—were buried across the countryside of England to ensure that she would not rule or spread her evil magic again. In modern times, suddenly, various ghouls both human and actually ghoulish are finding those body parts and working to make Nimue whole again—wherein she will promptly take over the world with her forces of evil and darkness. Yes, really. Does this sound crazy, and, yes, again, over-the-top? It does? Good, because, again, this is exactly what makes “Hellboy” such fun.

Thus, Hellboy/Anung, Trevor, Alice and a wildy unpredictable macho soldier named Ben Daimio embark on a mission to find out who’s gathering together Nimue, to stop them, and to put Nimue to rest forever before she, well, takes over the world and starts her reign of darkness. Along the way, writer Cosby dares to include flashbacks to the World War II origins of Hellboy, some truly scary apocalyptic visions that are straight out of the stuff that nightmares are made of, several truly frightening creatures and monsters—and a strong plot point that will not be revealed here but is so daring, so in-your-face, so original and glaringly cliched at the same time, in this context, one just has to lean back, laugh and enjoy its daringly enjoyable aspects. Cosby seems to have said, “Well, what the hell, I’m going to throw this in there, too,” regarding this particular plot point—but it works. Yes, really.

The acting is strong in “Hellboy,” and lead actor David Barbour portrays Hellboy with the right mix of rock and roll rebelliousness, angst, neurosis, darkness, questioning, anger, punkishness—and macho, action-adventure-lead-hero humor. And Barbour achieves something quite respectable—he matches, and makes his own, the excellent previous performances of Hellboy by Ron Perlman in the franchise’s previous two films, “Hellboy” (2004) and “Hellboy 2: The Golden Army” (2008). And that’s something, because Perlman owned Hellboy in those two films. But Barbour is talented, and he’s talented and courageous enough to also make Hellboy his own in this film. It’s not anything negative towards Perlman, but actually a bit of respect to Ron Perlman, as if to say, hey, we’re just keeping this story going at the same level that you kept it going in the previous two films.

And Barbour is ably backed by Ian McShane as Trevor, Sasha Lane as Alice, Daniel Dae Kim as Ben, and, in a stroke of absolutely great casting, the absolutely beautiful, sexy and wonderfully sexy-evil Milla Jovovich as Nimue. Jovovich is great in this movie—she achieves that difficult balance of being horrifying, evil and terrifying—while still being beautiful, sexy and attractive. Director Marshall wisely let Jovovich’s natural beauty and presence remain, and Jovovich uses that beauty to increase her character’s power, allure—and creepy charisma. Jovovich is just great as Nimue. And when Nimue faces the wise-cracking, rock-and-roll, straightforward Hellboy, it’s just all hilarious and too fun to watch. Lane is lovably lovable as Alice, Kim is appropriately macho soldier tough guy, and McShane just about steals the movie from everyone—including Barbour and Jovovich—in a great, highly-watchable and powerful performance as Trevor. Trevor is a man who stepped in to prevent the government from killing Hellboy, then raised this human-demon child to adulthood, dealing with his fluctuations in mood and attitude, all the while fighting other demons and ghouls and creatures populating the world and the underworld. McShane provides an adult, mature and moral counterbalance to Hellboy’s immaturity, recklessness and unpredictability, and it’s interesting to watch the characters bounce, fight, battle and play off of each other’s differing attitudes and approaches to life. That mix of feelings between the father and son is a strong plot element, and it’s a credit to Mignola and Cosby that this unique father-son dynamic is included in the Hellboy story and movie—this storyline adds depth to the general broadness of other aspects of the story.

And then there’s Thomas Haden Church appearing—again, hilariously and in a most satirical manner—as Lobster Johnson—yes, Lobster Johnson—a classic walking stereotype and cliché of every macho, tough-talking, take-no-prisoners, deep-voiced and muscled World War II military stand-up, straight-ahead soldier. Church’s Johnson is, again, keeping in line with everything else, wonderfully, crazily over-the-top. But it works, and it’s fun to watch, too.

“Hellboy” also manages to maintain, through all of the varying story elements, time periods, genres, moods and atmospheres, besides that sense of humor and sense of satire and playfulness, a very rock and roll aesthetic—through not just the well-chosen use of rock songs and a rock-influenced soundtrack by Benjamin Wallfisch, but through its very overall atmosphere and mood. The movie is rebellious, independent, freewheeling, free-form, cool, it looks cool, it sounds cool, and it never takes itself too seriously, even when the very fate of the world and all that is good is at stake. The movie, and Hellboy itself, is just very rock and roll, and that ends up providing a fun, funny and entertaining time at the movies.