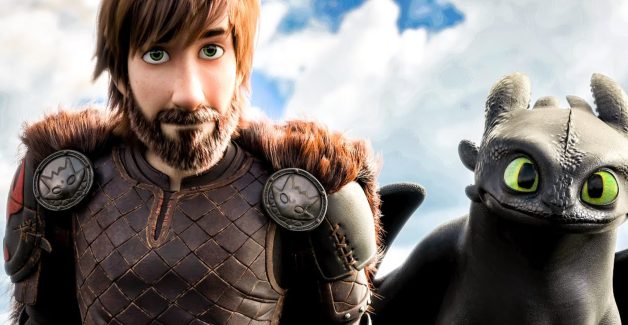 HOW TO TRAIN YOUR DRAGON: THE HIDDEN WORLD

Who doesn’t love dragons? These huge, flying, sprawling, equally-beautiful and scary (usually scary in a good way), fire-breathing, mythical, mystical beasts of fantasy have inundated popular culture for centuries, appearing in folk tales, urban legends, campfire stories, books, comic books, short stories, television shows, animated movies and television shows, and scores and scores of movies, with notable inclusions in “The Lord of the Rings” and “Hobbit” movies, the “Dragonriders of Pern” series of books and short stories, on television in “Merlin,” “Game of Thrones,” “The Chronicle of Nardia,” “H. R. Pufnstuf,” “Kukla, Fran and Ollie,” “Stargate: SG-1” and many television others, and, of course, in scores of films, including “Dragonheart,” “Dragon,” “Dragon Hunter,” “Dragon Crusaders,” “Willow,” “Pete’s Dragon” (two versions), “The Chronicles of Nardia: The Voyage of the Dawn Treader,” “Dark Kingdom: The Dragon King,” “Dungeons and Dragons,” “The Neverending Story,” “Dragonquest,” “The Mummy: Tomb of the Dragon Emperor,” “Jason and the Argonauts,” “Percy Jackson and the Olympians: The Lightning Thief,” “The Last Dragonslayer,” “Stanley’s Dragon,” “Dragon Storm,” “Eragon,” “Thor: Ragnarok,” “Dragonslayer,” “Dragonworld,” and many more. People love their dragons.

And, fortunately, during the last nine years, filmgoers have been able to enjoy three simply delightful, joyously positive and optimistic, stunningly beautifully in terms of visuals, and well-acted, well-written and well-directed kids-oriented animated dragon movies–the “How to Train Your Dragon” series, based on the series of books by British writer Cressida Cowell. These wonderful films for kids (which kid-at-heart and understanding, positive adults can also enjoy) have included “How to Train Your Dragon,” from 2010; “How to Train Your Dragon 2,” from 2014, and, now, just in time to arrive as yet another good escape from the cold and gloom of winter, “How to Train Your Dragon: The Hidden World,” an infectiously funny, fun, positive, entertaining animated movie, with lovable characters—human and dragon—a good script (there are some holes and problems here and there, yes, but not enough to sink the movie), great direction from Dean DeBlois, and an overall breathtaking production, art, scenic and animation design that brings amazing visuals to wondrous life throughout the film. Visuals alone cannot solely make a movie, of course, and thankfully the amazing visuals in “World” are indeed support by the aforementioned likable characters, decent script, and strong direction by DeBlois, who has overseen an army of animators, all of whom deserve kudos, credit, thanks and appreciation for their incredibly detailed, believable hard work on this movie.

“World” is also supported by an excellent, talented cast of actors who do a great, animated (pun intended—sorry) job with their voice work in this movie. DeBlois and his producers, Bonnie Arnold and Brad Lewis, wisely know that one of many keys to a successful animated movie is the talent of your voice actors, and they have succeeded in this area in “World” and in the first two movies in the series. In “World,” a stellar cast of talented actors work at a high level consistently, injecting great life into their respective characters throughout the movie. Jay Baruchel, America Ferrera, F. Murray Abraham, Cate Blanchett, Craig Ferguson, Gerald Butler, Jonah Hill, Christopher Mintz-Plasse, Kristen Wiig, Justin Rupple, Kit Harington, David Tennant all are having a great time, and their enthusiasm, positivity and optimism shine through in “World”—even the great actor F. Murray Abraham’s villain Grimmel is, if not exactly lovable or likeable, the type of Disneyesque, G-rated movie villain that won’t scare people too much, but will still register clearly as the bad guy. Yes, Abraham appears to be having a grand old time, too, leading his cast of generally much-younger actors with his noted gusto, talent and creativity. DeBlois, Arnold and Lewis know, also, that another key to a successful animated movie is to cast your main villain well, too, and with Abraham in the role of Grimmel, they’ve succeeded.

Jay Baruchel and America Ferrera lead the cast with sweet, good-natured, always-positive performances as the lead characters Hiccup and Astrid, the young (apparently, they’re in their twenties) leaders of a quite colorful and funny community of Viking-type of people and their friendly dragons who all live in peace in their land of Berk. Hiccup and Astrid lead like scores of young community leaders before them—somewhat respected by their younger peers, viewed with some doubt by some of their community’s elders, and questioned often about their decisions because of their youth and, at time, youthful innocence. They listen to their elders and try to lead, but, in “World,” there’s trouble in their dragon-human paradise. Their storybook community is becoming threatened by over-population, unruly dragons who still have a bit of the wild in them, and, worst of all, threats from Grimmel, a dragon hunter and dragon slayer who is intent on destroying Berk, destroying dragons and, of course, taking over Berk’s part of the world.

Thus, various back-and-forth battles, journeys, treks, quests and decisions about the future of Berk and the future location of Berk occur, with Hiccup and Astrid doing their best to do all they can to lead their Berkian community to safety, to elude, fight and destroy Grimmel and his army of evil dragons, and to possibly somehow maybe find the mythical hidden world that Hiccup’s father told him about in childhood stories—a land where dragons can peacefully exist, without the danger from humans.

Meanwhile, there’s a dragon love story—really—between Hiccup’s main dragon friend, Toothless, and a dragon connected with Grimmel, a dragon known as a Light Fury, and although a dragon love story sounds like that could be corny or tacky, in this movie, it works. There are tender, emotional scenes between Toothless and Light Fury as they court each other and fall in love, and, yes, it’s actually heartwarming and it actually works. It’s a nice companion love story to the evolving young-love love story between Hiccup and Astrid, and to watch both couples develop their relationships amid their journeys and battles against Grimmel provides a good counterpoint to the lead story at hand. There’s some emotional character development to accompany the continuing main story, and it’s a nice balance.

Add in the group of Berk residents who assist Hiccup and Astrid, and you have a full kids’ movie worth of funny supporting characters with equally funny names—Valka (Cate Blanchett, clearly enjoying herself); Stoick the Vast (Gerald Butler, also having fun); Gobber the Belch (an amusing Craig Ferguson); Snotlout Jorgenson (Jonah Hill, always funny); Fishlegs Ingerman (Christopher Mintz-Plasse); Ruffnut and Tuffnut Thorston (Kristen Wiig and Justin Rupple); Eret (Kit Harington); and Spitelout and Ivar the Witless (David Tennant). It must have been a blast to come into work and voice these likeable characters for a couple of days or weeks, and all of the actors, again, just seem to be immensely enjoying themselves, and their enthusiasm shows up on screen. It’s not easy to voice animated characters and bring them to life in a successful manner—many actors are greatly challenged by doing animated voice work—and this cast succeeds to a great degree in “World.”

It’s a good story—a good kids’ story—and to sit back and watch Berk’s cast of lovable, funny Viking humans and their peaceful, equally funny and lovable domesticated dragons interact, banter, battle, fly and soar in Berk, across vast oceans, on beautiful islands–and elsewhere–is to enjoy the fantasy world that is dragons and all that they represent. Author Crowe devised an original dragon world that kids could love and appreciate and enjoy, and DeBlois, Arnold and Lewis have embraced and subsequently succeeded in presenting Crowe’s world in three enjoyable kid-oriented animated movies.

And those visuals—this movie is drawn, animated and designed in a consistently high level of breathtaking beauty. There’s a variety of dragons to enjoy; various communities and worlds presented—mountains, trees, forests, coves, oceans, islands, underground worlds, Grimmel’s dark chambers; battles and action scenes amid mists and darkness; those funny characters and their equally funny appearances; battle and action scenes; sunrises and sunsets; and, again, soaring, flying dragons regally flying amid islands, oceans and, yes, hidden worlds. The scenes in that hidden world are especially breathtaking, filled with eye-popping color, vastness, mystery and beauty.

“How to Train Your Dragon: The Hidden World” should be seen up on the big screen, in movie theaters, as all movies should be seen, of course. Additionally, the movie is good enough on its own, in a traditional presentation, that filmgoers should not have to waste money on added-cost bells and whistles such as Imax, enhanced sound or 3D—it’s just not worth it. Avoid these add-on rip-offs, and just see and enjoy “Hidden World” in a traditional, two-dimensional viewing! The movie is good enough on its own.

If kids and adults can suspend their disbelief, quietly put aside some somewhat-glaring plot holes and the occasional clunky dialogue, and simply enjoy what appears to be the conclusion to this lovable trilogy of human-and-dragon-related movies, all should have a great time at the movies with “How to Train Your Dragon: The Hidden World.” Just as “The Kid Who Would Be King” and “Alita: Battle Angel” succeeded in providing some warm comfort at the movie theaters this cold winter, “How to Train Your Dragon: The Hidden World” succeeds and accomplishes the same thing, and, once again, filmgoers can be thankful and appreciative of having another dragon-oriented fantasy film to wholly enjoy at the movies.