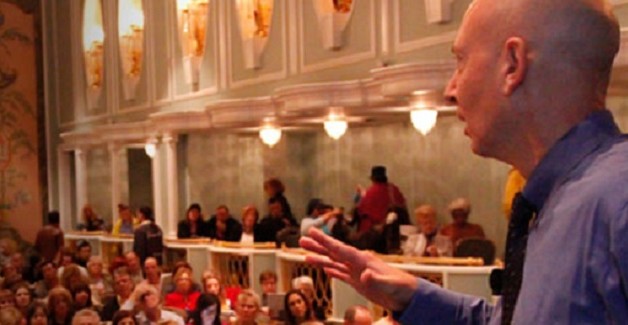 WASHINGTON FILM INSTITUTE
cordially invites you to the One Day University, including the lecture “Five Films that Changed America” by Marc Lapadula:

One Day University® brings together professors from the finest schools in the country to present special versions of their very best lectures – LIVE.  Each Class is 75 Minutes • You Choose the 4 You Want the Day of the Event. Registered students will receive a complimentary 1 year subscription to The Atlantic Magazine.  Full course descriptions and professor bios are way below.

Why Some People Are Resilient, and Others Are Not

1968: The Extraordinary Events of a Memorable Year

The Supreme Court: An Inside Look

Gershwin, Ellington, and the Search for the American Sound

China, Russia and India: The Rise of the Rest

Living and Dying in America: The Politics of Healthcare

Morality in America: From the Puritans to Today

WHY SOME PEOPLE ARE RESILIENT, AND OTHERS ARE NOT

In this fast-paced, interactive, and fun session Dr. Andrew Shatte will lead you on a tour of the big questions in the psychology of resilience. Why does one person overcome adversity while another falls into helplessness? What are the 7 ingredients that make up resilience – and do you have them?
We will see that habits in how we think have an enormous impact on resilience. You will gain insight into two of your thinking styles and learn about the impact they can have on your success, happiness, and health. Dr. Shatte will show you how to boost resilience with case studies from his work in large corporations and the public sector. And in the final moments of the workshop, he’ll even reveal the biggest secret to a life of resilience!

Dr. Andrew Shatté teaches psychology at the University of Arizona. He was also a professor at the University of Pennsylvania, where he was awarded as the best professor by the students in 2003 and received the Dean’s award for distinguished teaching in 2006. In 2002, Professor Shatte co-wrote a book titled ‘The Resilience Factor,’ which was released by Random House in 2010.

The Sixties. It was a decade of hope — and disillusionment. A time of promise — and backlash. An era animated by youthful idealism — and frustrated by political disappointment. We entered the decade inspired by a president, stirred by a dream, and dancing innocently to “I Want to Hold Your Hand.” We ended the decade still clinging to those hopes and ideals, but sobered by the realities of a brutal war, bloodied protesters, burning cities, and a nation and culture coming apart.

No other year better encapsulates the narrative of the Sixties than 1968. It was a year when young people went Clean for Gene in the New Hampshire primary — and then got tear gassed in Chicago. When the country looked to larger-than-life leaders to guide us out of war and division — and then saw them felled by assassins’ bullets. When many hoped that a Kennedy would return to the White House — and instead we got a Nixon. In 1968, we saw a political party that represented the common folk get torn asunder by cultural and racial hostilities. We saw no light at the end of the tunnel in Vietnam. We saw Black Power meet law and order. We saw an America barely anyone would have recognized just a few years back. 1968 was like an electrical storm that hit our country, one that hot-wired every interaction, conversation, and event. And it put a charge in the emerging culture war that would define American politics and culture for decades to come. To understand the Sixties generation — and who we are as a nation — it is essential to journey through 1968 and see how that seminal year shaped and influenced our history.

Leonard Steinhorn is a professor of communication at American University. Professor Steinhorn currently serves as a political analyst for CBS News in Washington, D.C. He is the author of a much-debated book on the baby boom generation and co-author of a book on American race relations, and his writing has been featured in several publications, including The Washington Post, Salon, Politico, and Huffington Post.

THE SUPREME COURT: AN INSIDE LOOK

Beginning in 1802 with the Landmark case with Marbury v. Madison, The Supreme Court ruled on groundbreaking cases that have fundamentally altered the course of American history. In this talk Professor Jeffrey Rosen will take us inside the Supreme Court, exposing little known facts that he has learned through his countless hours of research. This fascinating and entertaining lecture will cover the history, structure, and operation of the Court and will highlight its major cases and where it might be headed next. More notably, Professor Rosen will show that it is far more than legal scholarship and judicial philosophy that has shaped the court – it is the interactions and personalities of the individual members that have created the institution we know today.

Jeffrey Rosen is a professor of law at George Washington University and the President of the National Constitution Center. The Chicago Tribune named him one of the 10 best magazine journalists in America and the L.A. Times called him, “the nation’s most widely read and influential legal commentator.” He has interviewed Chief Justice John Roberts, Justice John Paul Stevens, and Justice Stephen Breyer.

GERSHWIN, ELLINGTON, AND THE SEARCH FOR THE AMERICAN SOUND
Anna Celenza / Georgetown University

What is the American Sound? Does such a thing exist in the realm of concert music? During the 1920s and 30s, composers, music critics, entertainment executives and audiences believed in the idea of an American Sound, and they worked hard to promote their various points of view in the concert hall, via newspaper articles, through advertising and on film. This course explores the origins of two quintessential American masterpieces — George Gershwin’s Rhapsody in Blue and Duke Ellington’s Symphony in Black — and their relationship to contemporary American culture. As participants will discover over the course of the presentation, Gershwin and Ellington knew one another, and they each looked to the music of the other when composing.

Both Rhapsody in Blue and Symphony in Black were composed in an attempt to capture the essence of the “modern” American experience and blur the lines between classical music, popular music, and jazz. Using film clips, music excerpts, and popular dance steps from the 1920s and 30s, Professor Celenza will introduce participants to the wide range of musical genres and styles that influenced Gershwin and Ellington (from spirituals, blues, and Klezmer music to Tin Pan Alley songs, opera, symphonic forms and Ragtime) and facilitate an open discussion concerning music’s current role in defining American culture.

Anna Harwell Celenza is the Caestecker Professor of Music at Georgetown University and is the author of several scholarly music books. Her work has been featured on nationally syndicated radio and TV programs, including NPR and BBC.

LIVING AND DYING IN AMERICA: THE POLITICS OF HEALTHCARE

The nation is engaged in a bitter and partisan debate over the future of our health care system. How is it that we spend more on health care than any other nation (roughly $2.7 trillion, or 17% of our gross domestic product) and still have more than 50 million uninsured? How can we improve the quality and efficiency of the health delivery system? Should the government be more involved or less involved in efforts to reform the system? The Affordable Care Act (known as Obamacare) was designed to be a comprehensive effort to help the uninsured, improve the quality of the health delivery system, and slow the rising cost of medical care. But is it really that? In this lecture, Professor Michael Sparer describes the impact of the law to date, and reviews the key questions still unanswered. Professor Sparer also summarizes the ten most important trends in the healthcare marketplace, and how they already are affecting every one of us.

CHINA, RUSSIA AND INDIA: THE RISE OF THE REST

Think back to the 1970s: the end of the Vietnam War, inflation, America’s rust-belt factories going bust, disco, a stagnant Soviet Union under Leonid Brezhnev, intense global poverty in populous places like socialist India and Communist China, where additionally Mao had imposed the bloodbath of the Cultural Revolution. Now look around today, 40 years later: the Soviet Union is long gone and Russia has a large middle class. India, too, is a market economy with an expanding middle class, and China is the world’s great economic dynamo. What happened? How should we understand these changes? How might things look another 40 years hence? Does the apparent “rise of the rest” portend a decline in American power and influence? Is America’s place in the world, in fact, changing? Should it change? Or, is the “rise of the rest” just a temporary phenomenon, overhyped, a marketing slogan? Might China instead crash? Are India and Russia set for reversals, too? What are the real strengths and weaknesses of China, India, and Russia? More broadly, what lessons can we draw from these cases about global geopolitics and the world in which our children and grandchildren might live?

Stephen Kotkin is the John P. Birkelund Professor in History and International Affairs at Princeton. Professor Kotkin established the department’s Global History workshop. He serves on the core editorial committee of the journal, World Politics. He founded and edits a book series on Northeast Asia. From 2003 until 2007, he was a member and then chair of the editorial board at Princeton University Press, and is a regular book reviewer for the New York Times Sunday Business section.

MORALITY IN AMERICA: FROM THE PURITANS TO TODAY

While running for President in 2012, Rick Santorum noted that Satan has his sights on the United States of America. Mitt Romney attacked the decay caused by Barack Obama’s “secular agenda” and Newt Gingrich stated, “A country that has been now since 1963 relentlessly driving God out of public life shouldn’t be surprised at all the problems we have.” How did the USA become a nation with the soul of a church? Moral fervor led Americans to hang witches, enslave Africans, ban liquor, and lock up more people than any other nation. It also inspired abolition, feminism, and civil rights. And all while politicians misbehaved (one out of three presidents had affairs) and robber barons plundered.

James Morone is a political science professor at Brown University. He has been the president of the New England Political Science Association and of the Politics and History section of the American Political Science Association. He was a member (and recording secretary) of Governor Mario Cuomo’s task force on Universal Health Care for all New Yorkers, and a member of the National Academy of Science Committee on the Social and Ethical Impacts of Developments in Biomedicine. He is also a founding member of the health section of the National Academy of Social Insurance.

While most movies are mass-produced entertainment and escapism, there are some that have had a profound impact on culture. Whether intentionally or not, some films have brought social issues to light, affected laws, forwarded ideologies both good and bad, and generally changed the course of history through their impact on society. Renowned Yale Film Professor Marc Lapadula will discuss five films that, for better or worse, made their mark:

Marc Lapadula is a playwright and screenwriter with more than 20 years of award-winning teaching experience. His plays have been produced in New York (off-Broadway), England, Pennsylvania, DC, Maryland and Iowa. He has been commissioned and/or received options for several screenplays, as well. He has taught at Johns Hopkins, the UPenn, Columbia Film School, and, for over twenty years, he has taught the screenwriting program at Yale University. He is a script consultant/expert analyst for film producers and studios, among them New Line Films.