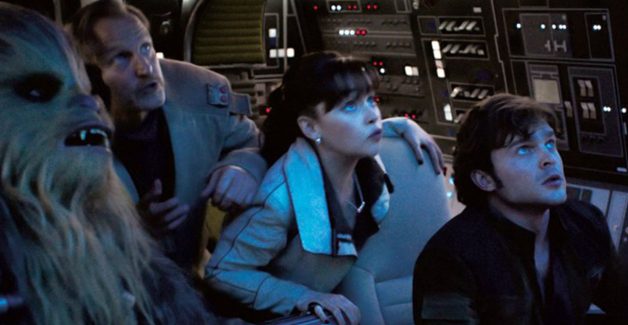 “Solo: A Star Wars Story,” which tells the backstory and origin stories of Star Wars characters Han Solo, Lando Calrissian and Chewbacca, is a great, rousing, action-packed, fast-moving, sweeping and swirling science fiction Western space fantasy that continues the positive, encouraging series of Star Wars films in recent years that has rejuvenated the Star Wars canon to new, unprecedented—and somewhat unexpected—heights. “Solo” is a worthy entry in the Star Wars canon, catalogue and franchise—whatever term one chooses—and is the perfect summertime-style, blockbuster-style, science fiction popcorn movie entertainment to see during the Memorial Day weekend of 2018—and some, diehards or not, may even want to see it twice, it’s that good.

Yes, the original directors of “Solo” were fired by modern-day Star Wars franchise producer Kathleen Kennedy, causing severe fissures, fan meltdowns, disruptions and catastrophes in the Star Wars insular, bubble-world, somewhat bizarre fan-world universe and time-space continuum, but once moviegoers get settled into their seats and proceed to enjoy this fun, funny, fast and entertaining movie, such office politics should instantly be forgotten—and tossed aside. The replacement director was, of all people, talented and veteran—and smart—director Ron Howard, who, in many interviews and in the finished film “Solo” itself, has thoroughly demonstrated that he does indeed have the adequate, required and sincere levels of respect, admiration and love for the Stars Wars universe, characters, stories and movies. Howard delivers a film that erases any fan-boy or movie-news-follower doubts about the film because of the aforementioned office politics—simply because it’s a good, solid, recommended Star Wars movie!

Kennedy and Howard, and their predecessor crews and casts in “Star Wars: The Force Awakens” (2015); “Rogue One: A Star Wars Story” (2016); and “Star Wars: The Last Jedi” (2017) have continually, consistently and consciously demonstrated a devotion to the entire Star Wars world, universe, characters and stories—while also keeping things modern, new, fresh and inventive. (It should be noted that the crews and casts of the modern-day Star Trek and James Bond movies have also accomplished the same goals, with the more-recent Star Trek and James Bond films also registering highly on the quality scales. Hey—equal time for all three long-standing film universes.) Modern-day, state-of-the-art technology helps things along, of course, but so do adding new characters, settings, worlds, stories and even new heroes and villains. Newer films in any long-standing series must remain fresh, but they must also retain some sense of continuity and respect to the overall series’ history—of course.

“Solo” accomplishes this, and it’s worth noting and hovering over, due to some very odd, unexplainable, weird—and unfair and disrespectful—advance whining, bickering, moaning and nerdy hand-wringing by fanboys and fangirls, as noted. Kennedy and Howard simply and professionally quickly moved past the whining, hunkered down, worked hard—and produced a fun, entertaining movie.

“Solo” includes an invigorating, fresh-faced, youthful cast of young actors seeming to be having the time of their lives—who wouldn’t be?!; continued assured and confident—and definitely sci-fi- and fantasy-rooted-and-oriented—direction from Howard; excellent production values throughout that include the aforementioned state-of-the-art special effects that several times are just awe-inspiring and breathtaking, the requisite sci-fi-and-fantasy-rooted make-up, costuming, props design, ship design, art design, and set design that, together, definitely place the movie in its own, unique sci-fi and fantasy world and atmosphere; and a smart, well-written, multi-layered script that does indeed provide a clever, interesting and well-crafted backstory and origin story of hustler, scavenger and overall space rogue and rebel Han Solo (wonderfully, exuberantly portrayed by Alden Ehrenreich, who is all of 28); Solo’s counterpart in hustling, scavenging and rogueing, Lando Carissian (an equally wonderful and exuberant Donald Glover, 34, who, much like Jared Leto these days, can do no wrong in film, television and music); Chewbacca, played well once again underneath forests of woods and melted mounds of prosthetics by 6-foot-11, 31-year-old former professional basketball player Joonas Suotamo. Add the young and beautiful Emilia Clarke, 31—Clarke’s natural beauty just bursts off of the screen—who plays Qi’ra, the young Solo’s love interest, friend and comrade in arms, and a strong Woody Harrelson as an older space rogue mentor of Solo’s who’s something of, well, an older version of Solo, and there’s your strong lead cast.

To reveal too many aspects of the Han Solo/Lando Carissian/Chewbacca backstory and origin story would be to offer too many spoilers. However, the story is properly, strongly layered, with varying levels of plots and subplots that, to the film’s overall major credit, do not delve into the whole Darth Vader/Jedi/Force/rebel war thing—and lawdy is that a great relief for this film and the series. In fact, and it’s not a spoiler, there is no major, over-riding Darth Vader/Jedi/Force/rebel war thing present in “Solo”—and, again, that’s a major positive attribute of the film. “Solo,” much like “Rogue One,” exists in its own Star Wars mini-universe, telling its own stories, with its own sets of characters, enjoyably free of the constraints of the more familiar story and backstories that, alas, are on the verge—despite the recent films’ success and quality—of getting tired once again.

Filmgoers will enjoy in “Solo” the excitement of seeing just how the young Han Solo, Lando Carissian and Chewbacca handle early missions, dilemmas, operations and relationships; how they meet and eventually work together; how they act and emote and handle their lives, challenges, obstacles and, again, missions and relationships as earlier versions of the familiar characters; and how their early lives eventually contribute to shaping the characters’ later lives and adventures.

And Howard and his crew are smart enough to include plenty of action and adventure to keep things moving appropriately along. There are the requisite hand-to-hand, gun and ship battles, and they are fun and suspenseful, but—no detailed spoiler here, either—there is one protracted—but positively protracted—action sequence that is just astounding in its overall presentation, execution and entertainment factor. The amount of detailed special effects work just for this one particular sequence alone was intense and intensive—and the special, visual, computer and digital effects crews deserve some major credit and kudos for this one, particular scene. Audiences will know what scene this is when they see it—because they will remember it well.

And, as always, the special, visual, computer and digital effects crews, the set designers, production and art designers, props designers, costumers and make-up artists—and other production crews—are all to be commended for the overall look and feel and atmosphere of “Solo.”

The smart, well-crafted script was written by—and this should please anyone and everyone—Jonathan Kasdan, 38, and his father, Lawrence Kasdan, 69—the screenwriter, director and producer who just happens to be the co-writer of “The Empire Strikes Back,” “Raiders of the Lost Ark,” “Return of the Jedi,” “Star Wars: The Force Awakens,” and many other classic films, of course. Interestingly, “The Empire Strikes Back” was released in 1980, so Kasdan has been involved in the Star Wars series in one major way or another for…thirty-eight years, which is as long as his son has been alive. Think about that one for a while. And, similarly–Jonathan Kasdan was born during the year that “The Empire Strikes Back” was released, and now he’s the co-writer, with his father, of the current Star Wars film. Anyways, this fascinating father-son Kasdan scriptwriting team—and kudos to Kennedy and her co-producers for keeping the writing in-house with the involvement of the talented, creative Kasdans—knows what they are doing, and they deliver, with sharp, insightful moments that involve some slight Star Wars canon references, some new stories and characters and insights, and, overall, just some general fun sci-fi and fantasy elements. It’s just fascinating to see the old and the new elements and insights lightly and refreshingly bounce off of each other in “Solo,” and it’s equally fascinating to consider how this occurred due to the interactions and co-writing of the veteran father and the relatively newbie son.

In the end, Howard, Kennedy, the Kasdans, the cast and the crew all work together to deliver a quality, fun and entertaining science fiction and fantasy film that includes enough of the classic, traditional Star Wars elements and enough of the newer, fresher and youthful-oriented Star Wars elements to produce a film that will please general filmgoers looking for a good time at the movies; sci-fi and fantasy fans in general; Star Wars diehards; casual Star Wars fans; and moviegoers in general. One does not necessarily need to be a sci-fi or fantasy film fan to enjoy “Solo: A Star Wars Story,” because the movie is simply a fun time at the movies, and that is yet another compliment for the film, and another reason to head out to the theaters and see “Solo” this Memorial Day weekend of 2018.

Oh, and one more thing: The next Star Wars film is scheduled to be released in December, 2019. That film is set to be co-written and directed by J. J. Abrams, who co-wrote and directed “Star Wars: The Force Awakens,” which, now, is considered to be the highest-grossing film of all time at the North American box film.