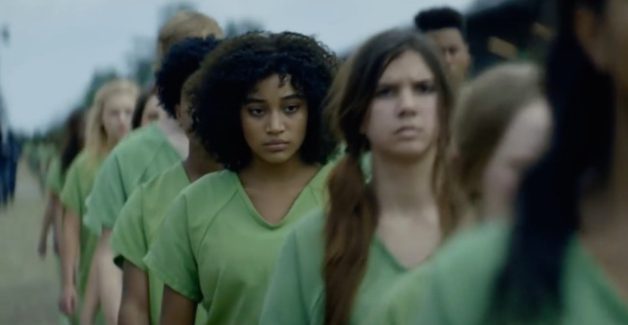 Based on “The Darkest Minds” by Alexandra Bracken

Despite falling into one of the most over-used, over-done movie, television, book and comics story cliches–youths with superpowers battling evil government officials in some dystopian, futuristic, barren society in a sci-fi milieu and setting–“The Darkest Minds” specifically manages to overcome these cliches with writing that attempts, and succeeds, to reach deeper, comment deeper and analyze deeper the implications of its still-interesting story and backstory; that particular good story, which manages to provide some twists on the familiar and cliched with some interesting additions to the genre that, while still familiar, are interesting to think about; very likeable and down-to-earth characters and equally down-to-earth actors to play those likeable characters; and consistently above-average production values that manage to avoid the potentially cheesy and tacky aspects of some of these types of films that have brought down other movies in this genre.

Yes, there is zero doubt that “The Darkest Minds” may remind filmgoers of the “X-Men,” “Hunger Games,” “Divergent,” “Harry Potter,” “Twilight,” and even, on a basic story level, the “Star Wars” films, but the movie, again, still manages to rise above and succeed as an entertaining summer sci-fi film. And, in early August, who could ask for more than that at the movies? And all of these movies owe a debt to hundreds and hundreds of previous sci-fi and fantasy films—notably “Logan’s Run” on many levels—and all of these movies borrowed heavily from previous films and each other—generously and, at times, ridiculously—so “The Darkest Minds” really can’t be criticized too much for more of the same, considering everyone else borrowed, stole, pilfered and lifted from everyone else. It’s the same, really, in any movie genre. The clichés pile up to Everest and McKinley heights through the decades, in every genre, but, somehow, the movies keep getting made and people still keep going to the movies. That’s not to say that’s good—because it isn’t good, and it’s awful in fact—but it’s just noting a reality in the context of “Darkest Minds” familiarity.

In the film, it’s sometime in the not-so-distant-future, and an unexplained virus, or disease, has killed most of the world’s children under the age of twenty. The children who do survive have, yes, varying degrees and types of superpowers—and, yes, everyone, as noted, will immediately think of the younger X-Men, and you’re allowed to make comparisons, because it’s unavoidable—and, yes, they are on the run, and, yes, the evil, fascist, psycho, scared—and evil—government suits are after them. And when the government thugs do find the kids, they horribly stun them, handcuff them, arrest them, and subsequently place them in so-called camps that are really prisons and detention centers. Hmmm—does this sound frighteningly similar to certain current political situations in the United States, minus the superpower, disease and sci-fi elements? Yes, it does—and the film story’s horrifyingly similarities to current events in 2018 are shocking—and do provide the film with an even more powerful message, lesson and statement. The film, though, it should be noted, is based on a 2012 book from Alexandra Bracken, and that book was released before the current immigration crisis in the United States. Nevertheless, the similarities between certain aspects of the movie’s story and 2018 current events do provide a powerful lift to the movie.

The “Darkest Minds” heroine, the beautiful, tough, independent, likeable—and quite smart, insightful and thoughtful—Ruby Daly is a teenager, about 16 years old, who is not only one of the superpower kids on the run, she’s also one of the most sought-after and most gifted of all of the superpower children. Ruby (wonderfully portrayed by young actress Amandla Stenberg, 19, who gives a dignified, empowering performance) possesses certain telepathic, mind-reading and thought-control special abilities that are so rare, she is the center of a major government effort to hunt her down, imprison her—and possibly out-right kill her. She knows this, and attempts to run and hide somewhere safe—possibly a rumored safe haven for kids out in the country somewhere—and she is joined in her trek and journey by three absolutely equally likeable, spunky, tough and independent kids with varying superpowers—Liam (a restrained, thoughtful and caring Harris Dickinson, who avoids pretty-boy romance trappings that tend to afflict some teen romantic leads in any genre, and comes across as a teen hero you can really root for and support for his intellect, same as Ruby); Charles (Skylan Brooks, who registers on the same intelligence level); and an absolutely adorable and just-plain cute (but still tough) Suzume, or Zu, a younger girl who cannot talk but man can she express herself through body language, eyes, facial expression and her general presence (played by a spunky Miya Cech, who does wonders in a role with no literal lines but who must still generate that presence and emotion).

Liam, Charles and Zu all possess lower levels of superpowers, but they’re still on the run, and still sought by government thugs, bounty hunters, officials and, yes, even government crazy-mad scientists who, yes, want to poke, dissect, experiment with and study the superpower kids for who knows what types of shady, corrupt and evil government plans, operations and programs.

Together, Ruby, Liam, Charles and Zu work together to try to get to somewhere safe, to try and avoid the government bounty hunters, soldiers, thugs and officials; and learn to like each other, respect each other, care for each other and protect each other. The bonds that the four characters form, and the rugged, on-the-run, off-the-grid family that they create is continually touching, funny, dramatic, thought-provoking—and always entertaining. Stenberg, Dickinson, Brooks and Cech carry this film, are consistently likeable, are wholly sympathetic and caring, and their performances are only to be praised. It would not be surprising if “The Darkest Minds” launches their careers to another level—and that would be deserving for these four impressive young actors.

By the way, that particular bonding, caring, friendship, family feeling and chemistry that the four actors create for Ruby, Liam, Charles and Zu is, as noted previously, one of the inventive aspects of the movie that help propel the film above its potential obstacles, and helps the movie remain entertaining. It’s not always easy for actors to create actual chemistry among characters—even actors portraying romantic leads and even actors portraying characters that have to rely on each other in sci-fi and fantasy settings such as those in “Darkest Minds”—but Stenberg, Dickinson, Brooks and Cech do create a chemistry, and moviegoers will feel those emotions as they watch the film.

Eventually, certain plots and subplots regarding the children, the camps, the government’s pursuit of the children, a rogue humanitarian organization that tries to help the kids, government evildoers, shady government programs and plans regarding the kids, and the fates of the four main characters intertwine to propel the film’s story, backstory, plot and character development forward. As the chase and conflict between the government and the kids intensifies, so does the action and suspense.

However, the film almost loses its footing in a seemingly-rushed, too-action-packed and almost-clumsily-staged climatic third act, which tends to rely too much on standard, also-cliched action-adventure fare to inject suspense, or try to inject suspense. There are scenes of fighting, explosions, gunfire and action that are cliched, and do almost kill the film and kill the third act, but another plot twist soon arrives, the film settles back into its original, welcome thoughtful and insightful mode for the ending scenes, and the film somehow saves itself in its last minute, despite a plot twist and turn that is questionable, debatable, possibly unnecessary—but still interesting, thought-provoking, moving, emotional, and powerfully dramatic. The ending scenes provide a more quiet counterpoint to the cluttered action sequences, and, again, bring the film back down to earth before its conclusion.

“The Darkest Minds” raises the same questions that propelled the better “X-Men,” “Divergent” and “Hunger Games” films and the original “Logan’s Run:” Who, really, has the right to question people who are different? Who can question, kill, fight, be scared of, or imprison and abuse certain people just because they look different, act different, live differently, have different skills or powers or abilities or intellects? What causes people to be so scared of other people just because they are so different? What are the actual, real causes of racism, bigotry, prejudice, class differences, and the wants and needs of psycho power-mongers to control, hunt down and kill others just because they are different and just because the power suits fear them so much? And, on a sci-fi and fantasy level, why condemn, prosecute, imprison and/or kill others just because they have certain superpowers but aren’t truly a danger to anyone on any level? What propels such fear in people, especially people in power? Where does this psycho urge among some powerful people come from to control other people who are not as powerful?

And how can the common man—even the common man with uncommon futuristic sci-fi and fantasy superpowers of mysterious origins—fight those who fighting or trying to fight them, keep them down, lock them up, own them, kill them, imprison them? How can the common man wage uncommon war, rebellion and resistance on an honorable and heroic level to save themselves, save others like them, save humanity and save the world against corrupt, criminal, power-mad, psycho dictators, rulers, fascists and power-mad lunatics in positions of power?

These probing questions all arise in “The Darkest Minds”—and, alas, in real life, throughout history. The fact that “Darkest Minds” raises these pertinent, important questions and tries to answer them on some levels provides that level of intelligence and insightfulness that keeps the film smart, interesting and entertaining.

Again alas, all of these questions are questions for the ages—and our current age. Thus, we will always need films like “The Darkest Minds” to raise these questions and attempt to provide some answers. One answer, and message, prevented in the movie is to never give up, to keep on fighting, to never give in, to never give up, and, of course, to live and fight another day. That’s a powerful message that is presented by the film, to its credit. That’s also a powerful message for any moviegoer to take with them out of any theater from any movie in any genre. “The Darkest Minds” will make people want to fight corrupt government evildoers, and the movie will make people want to live and fight another day. In these troubling times, that’s a wonderful, welcome message.