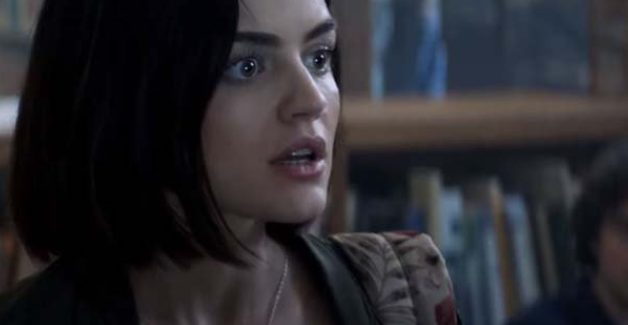 “Truth or Dare” is the type of modern-day horror film that seems to have started with an initial pitch idea that seemed interesting–what if a twentysomething spring break game of truth or dare among close friends took an evil, twisted, supernatural turn that inflicted horror on the game participants–but was never intelligently, satisfyingly or entertainingly developed in an inventive manner. Alas, this attempt at horror fails miserably, and marks an abrupt halt to a string of excellent films that have been released so far in 2018.

“Truth or Dare” never fully, adequately takes advantage of its initial premise. The film only starts weak–and goes downhill from there. The film has some decent production values, but the directing, writing and the acting are just average. The story, backstory, script and dialogue obviously needed some more mature, experienced–and clever and inventive–screenwriters. The direction is unnecessarily unpleasant–strangely and grossly violent, mean-spirited, immature, childish even, and, through most the movie, just plain difficult to stomach, difficult to care about–and quite difficult to enjoy.

The ending of the film is one of the most disappointing, most ridiculous and least-developed endings for a horror film in quite some time. The ending feels as if it was tacked on at the last minute, and it feels as if the screenwriters and director never had a satisfying ending ready in the first place. As it stands, the ending is as disappointing as the rest of the movie.

“Truth or Dare” is not recommended, and anyone venturing out to see this major disappointment at the theaters on Friday the 13th would indeed be in for about ninety minutes of pure filmic bad luck.

If you do venture out to the movies this weekend, these are the films to see: “Ready Player One,” “Tomb Raider,” “Midnight Sun,” “Game Night,” “A Quiet Place” and “Black Panther.”