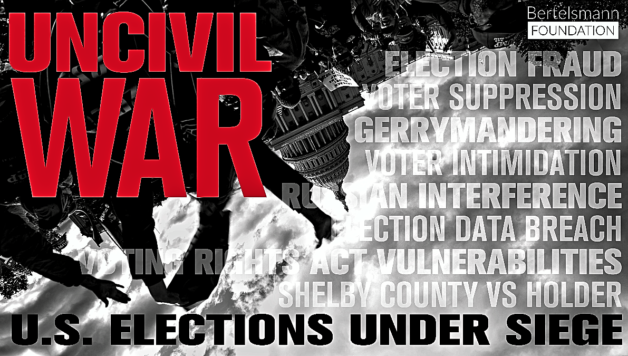 Americans are losing faith in democracy. In the lead-up to 2020, Uncivil War, a new documentary from the Bertelsmann Foundation, explores three sources of disenfranchisement in the United States: gerrymandering, voter suppression, and disinformation. The film unravels a web of threats to American elections, separates truth from fiction, and exposes a hidden war against democracy itself.

Free seating is available on a first-come, first-serve basis. A free drink and popcorn will be provided.

The film screening will be followed by a discussion with Peggy Welch, former member of the Indiana House of Representatives, and David Becker, executive director and founder of the Center for Election Innovation & Research, both of whom appear in the film. Tony Silberfeld, director for transatlantic relations at the Bertelsmann Foundation, will moderate.