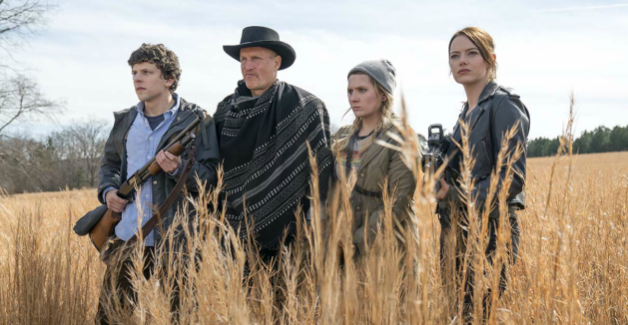 “Zombieland:  Double Tap,” the sequel to 2009’s instant-classic “Zombieland,’ is a fun, funny and entertaining movie, is a worthy sequel to the first film, features some great performances by the four returning lead actors, features once again a smart, insightful combination of comedy and horror, is still great satire on popular culture, and is, again, ably and confidently directed by the first film’s director, Ruben Fleischer.

Alas, “Zombieland: Double Tap” is not as great as the first film–but it’s still good; suffers from sequelitis a bit here and there; falters in just a couple of scenes; and the movie doesn’t bring much that’s overly-impressively new or original to the over-arching story, plot and characterizations. However, “Zombieland: Double Tap” does have the returning Woody Harrelson, Jessie Eisenberg, Emma Stone and Abigail Breslin–four talented actors returning to roles and characters that rank among the best roles and characters each of them have had, including Harrelson. You just can’t help but love these four characters, despite their quirks, squabbles and rollercoaster emotions amid an increasingly dangerous and, yes, scary zombie apocalypse.

And, yes, in the “Zombieland” movies, there is humor, lots of it, and that helps propel these movies. also. That’s thanks to still-clever, still-savvy and still-satirical writing from writers Rhett Reese and Paul Wernick–the original writers of “Zombieland“–and new writer David Callaham.

Yes, head out and go see “Zombieland: Double Tap” this Halloween season at the theaters, and enjoy some funny, and scary, times once again with the lovable lead characters Tallahassee, Columbus, Wichita and Little Rock. This is one zombie apocalypse worth spending some time in–while you still can.